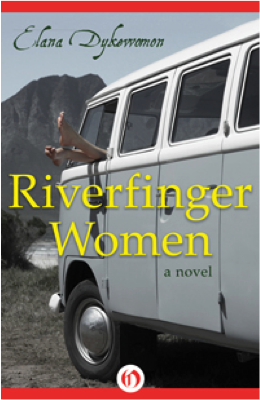 In her oral history presented by the Oakland Standard, Elana Dykewomon says she had her first serious relationship when she was seventeen. Seventeen is also the age of Inez, the protagonist of Riverfinger Women, when we first see her with her lover, Abby, curled up in bed.

Inez Riverfingers narrates her story in the style of an open, powerful confession, revealing the difficulty of living as a gay woman in the 1960s. Penned by Dykewomon when she was only twenty-four years old, Riverfinger Women is hailed as a classic of lesbian fiction. Not only does the work champion the heroism of its lesbian characters, it was one of the first novels of its kind to have a happy ending.

Published by the women’s press Daughters, Inc., in 1974, Riverfinger Women is the first of Dykewomon’s seven books, including Beyond the Pale (1997) and Risk (2009). A recipient of the Lambda Literary Award and the Duggins Outstanding Mid-Career Novelists’ Prize, Dykewomon lives in Oakland, California.

Meet Inez and Abby and embark on an exploration of their relationship in this excerpt from Riverfinger Women, which is now available as an ebook:

A man is another person— a woman is yourself, caught as you turn in panic, on her mouth you kiss your own. If she is taken you cry that you have been robbed of yourself. God laughs at me,  but his laughter is my love. —Djuna Barnes

ucy Bear and Rainbo Woman have disappeared. Therefore I, Inez Riverfingers, set down this, the pornographic novel of my life, with no regrets. The dough rises anyway, pierced as it is by arrows, and bleeding small bees that hover about the kitchen, searching for honey. I have wondered what people who don’t make love all the time do with their lives—and I have wondered this even though I have made love only six times this year, and was interrupted by the police one of those nights. They must have mistaken my abandoned sunday school, with its red urinal, for the abandoned  birth control clinic down the block. Or, possibly, they were agents of the Committee (my friends tell me that’s paranoia, and maybe it is, and maybe it’s not). They say it’s sex that makes everyone crazy, and I believe it, though I am not quite sure how it happened. End of Introduction. I am Inez Riverfingers, and I come complete with a vast family of the same. Some of their names: Ratatoville Riverfingers, Little Noodles Riverfingers, Natasha Riverfingers, Gabi-dog Riverfingers, Eulalee Riverfingers, Delphine Riverfingers, Holly Riverfingers, Bruce and San Fernando Blondie Riverfingers, Maggie and Al Bear Riverfingers, Peggy Warren (a closet Riverfinger), and Abigail, otherwise known as Abby Riverfingers (who chastizes me now,  years after, in her letters from Jerusalem, for not taking another steady lover—god knows I’ve tried, but it’s not an easy life for a dyke). Pickpockets, poets, acrobats, sociologists, tough street  women, farmers and friends.

This list making reminds me of the Iliad. Homer squatting to take a shit on a hot day in the Aegean counting off the names, as his fingers rubbed the white rocks near the water-on-fire- beneath-its-blue-skin that he could not see, rambling on about many-horsed whomever. “Who’s that old fart, daddy?” “Traveling storyseller son, one of that degenerate kind that go around buggering their own sex, relieving themselves on other people’s lawns, blind to the beauty of the true cosmos, telling lies and getting drunk shamelessly on other men’s hard-earned drachmas. Don’t bother with him. On to the Agora.” Inez Riverfingers the first. Vital Statistics: 5'3", 160 lbs. approx., 22 years old, lesbian, fresh scar on left wrist, old scar over left eye, appendix scar, light scar on bottom chin from times it was knocked in ten-year-old rage on the pool edge, scar at base of throat from almost successful thirteen-year-old suicide, brown eyes, huge breasts, brown hair down to same, fair & smooth skinned, limps on left foot, small hands, bites nails, has never  been known to mess with explosives, needs new boots and a dog of her own. Living patiently in the abandoned sunday school. Stuck here to tell the stories. Of Abby who was her steady true love for over two years, starting ten days before they graduated from high school. Of Peggy Warren who is friend to both of them and queen of the slightly seamy. Stuck here, at the end of another atypical early seventies college career, with only the memory, the smell of memory, of Rainbo Woman and Lucy Bear.

It’s quiet in the abandoned sunday school, living with straight women, unformed women. Only the two-dimensional canvas comforts the hungry eye: young girls, summer, 1971; summer, ’67; summer, ’54; summer, ’48; summer, ’32—the  young girls, the summer, the Scottish love songs, the young men getting their trousers sewn while the trousers are still on them, these years and the young girls sending boys away in the middle of the night, the hesitant one a.m. conversations: “Well, what are you doing Monday night?” “How should I know?” “Well, I’m having a birthday party in the mountains, and I’d like it if you could come.” “Oh—oh, in that case, sure, if I can get back by Tuesday—I’m running off to join the circus, seriously, and learn trapeze, and I have to train on Tuesdays.” The young girls, their hair pulled back, their flannel nightgowns, their dogs, their kittens—their eventual marriages, their eventual children, their eventual returning and saying to the odd person out: “What happened to us? We did not mean to squander our world as we saw the world squandered. We did not really mean to give up so much of our young lives to raising children, to all the problems of having children, to reading Dr. Spock, making contracts with our husbands about the kitchen.  We meant to live in the Eye of Art, live by danger and by cunt cunning, by sharp pleasure and deep understanding—then how did we end up with these frog eyes with their filmy lids, tell us, tell us!” I have not always been in these rooms, listening to and telling these stories. I have traveled in great arcs across the big
cities of America and Europe, and the arches were always her legs.

For when she moved on top of me, sleepily, I thought: a giant ant lives inside her skin, ready to pop out any second devouring and I am frightened of her I cannot understand how it is, that we are all in such different bodies.

Girls in boarding schools, years with sadists, black leather  jackets worn self-consciously, men picked up on Greyhound  buses, one-night stands, Baltimore slums, New York and S.F. gay  bars, hashish smuggling out of Tangiers, sisters and brothers in their underwear (looking at each other, listening to grandmother snore in the next room), funerals, acid and mescaline, the first promise of an armed women’s nation, the coming together and the dropping away, days on the road, police in the night, taking over city hall in Oregon, planning the deals right, pimping on the side, code after code, a different language for everyone and everything—it is all true, and there are some who’d give large amounts for definite verification.

In a moment I will conjure Abby Riverfingers and Peggy Warren and the burden of inventing myself again will wear off, the story will begin. Peggy who is somewhere in Michigan or Minnesota, or was two weeks ago, making her way across to this coast; and Abby, one and one-half years distant, only letters in the space between San Fernando Valley and the Promised Land. Moments have passed, and I will make Abby reappear. It is as easy as this, a voice squeezed from black plastic keys, telling stories in bed. The hammering of myself into the background will seem to be over. This hammering, this background—the language of our getting older, the time of our being no longer children but young women, that is to say, forming into identifiable shapes, it is not simple. From time to time you will hear that faint tackety-tackety-tackety, like kids at summercamp, making bronze name plates in relief dot by dot: these are our lives, these are our lives, these are our lives.