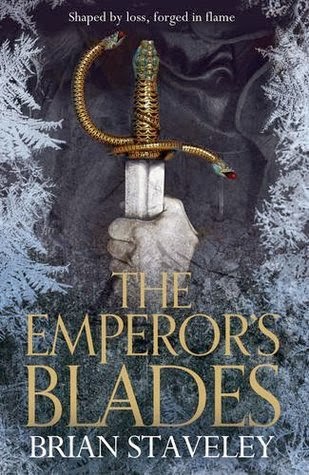 When the emperor of Annur is murdered, his children must fight to uncover the conspiracy—and the ancient enemy—that effected his death.

Kaden, the heir apparent, was for eight years sequestered in a remote mountain monastery, where he learned the inscrutable discipline of monks devoted to the Blank God. Their rituals hold the key to an ancient power which Kaden must master before it’s too late. When an imperial delegation arrives to usher him back to the capital for his coronation, he has learned just enough to realize that they are not what they seem—and enough, perhaps, to successfully fight back.

Meanwhile, in the capital, his sister Adare, master politician and Minister of Finance, struggles against the religious conspiracy that seems to be responsible for the emperor’s murder. Amid murky politics, she’s determined to have justice—but she may be condemning the wrong man.

Their brother Valyn is struggling to stay alive. He knew his training to join the Kettral— deadly warriors who fly massive birds into battle—would be arduous. But after a number of strange apparent accidents, and the last desperate warning of a dying guard, he’s convinced his father’s murderers are trying to kill him, and then his brother. He must escape north to warn Kaden—if he can first survive the brutal final test of the Kettral.

It's difficult to find fantasy books that are unique, and while this isn't the most original fantasy tale on the planet, it is interesting and engaging and kept me turning the pages long into the night.

My favourite character was Kaden, the heir to the Unhewn Throne who'd been sent to a distant monastery for the past eight years and was constantly being told to do things that on the surface served no purpose, such as running up and down mountains blindfolded, being buried to his neck in earth so that he could learn emptiness. But it's when the reasons behind all these things are revealed that you realise something more is going on and you get hooked even more on the story.

There is political intrigue, attempted murders and like Valyn, the reader isn't sure who is to be trusted. There is magic, but magic users, Leaches, are reviled as unnatural and are few and far between because most have been executed when their powers are discovered. Are Leaches the conspirators behind the emperor's murder and the plot to gain the throne or someone more mundane?

Fantastic world-building, with an ancient race of mythical beings (or are they?) along with a panopoly of different gods. We get to see both Kaden and Valyn's training, one as an adherent of the Blank God and one training in the elite fighting force, the Kettral (the kettral are also the giant birds they fly into battle) but we didn't get to see much of Adare, their sister. She's the eldest but because she's female she can't take the throne. Maybe we'll get to see a bit more of her in later books.

The writing flows well and the pacing is good, nothing seemed there just to pad things out, every scene has a purpose, even if at the beginning the reader isn't sure what that purpose is.

I really enjoyed it and will be eagerly awaiting the next part in the series, which will hopefully be soon.