Jennifer Snow is a contemporary romance fiction writer. Her previous releases include Mistletoe Fever and Mistletoe & Molly from The Wild Rose Press and Mistletoe Bachelors from Secret Cravings Publishing. She is releasing a new small town series through Harlequin Heartwarming fall 2013. Her six book Brookhollow series will debut with The Trouble With Mistletoe-November 2013.

She is a member of the Writers Guild of Alberta, Romance Writers of America, SheWrites.org, Backspace, and the Canadian Authors Association.

She lives in Edmonton, Alberta with her husband and three year old son.

I am definitely not a plotter, but writing a series has forced me to pre-plan more and keep detailed notes about secondary characters. For the most part, I still let the story flow and dictate the direction, but at some point in each book, I need to outline.

Always. And usually they are right about the direction that want to go in.

I’m more of a mid-afternoonish kind of person lol. But my writing definitely flows better in the morning.

I’m not a big traveller, at least not to foreign exotic destinations. A three day whirlwind trip to Las Vegas with lots of fun and little sleep is my ideal vacation.

Not yet. One of my current WIPs is set in Maui.

No, not while writing, but I find that music does inspire me, so I will take music breaks and listen to songs that I know will help get me in certain mind frames for particular scenes.

What A Girl Wants is a friends-to-lovers plot between Brookhollow’s best mechanic, Bailey Sheppard and handsome firefighter, Ethan Bishop. Since the books release, readers are having mixed reactions to the ending-which is actually very exciting. In this book I’ve accomplished something I haven’t before-I’ve created an antagonist that readers are really hating lol. It’s kind of funJ

So much! My agent, Stephany Evans from FinePrint Literary Management has been such a great resource and source of guidance through this industry. I have always looked at my writing as a business, so I started with smaller digital presses with shorter novellas to establish an author platform and then I went looking for an agent. Then we targeted the Heartwarming line and I’m so happy writing for them.

I don’t think so. I believe that everything happens the way it was supposed to.

Other writers who have created small towns where I’d want to live and characters that I’d like to know inspired me to try to create one of my own. A place that readers would like to escape to with people they can relate to for several hoursJ

Keep writing! Don’t give up on your stories when you hit a wall-skip over the troublesome middle if you have to, you can always return to it. The best quote I’ve heard was from Nora Roberts where she said-she can fix a bad page, but she can’t fix a blank one.

Anything by Debbie Macomber 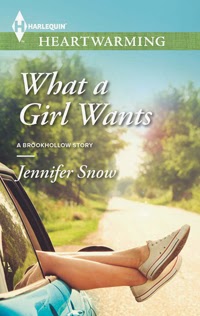 Friendship is overrated, if you ask her

She's always just been one of the guys...until she falls in love with one of the guys. Except Bailey Sheppard has carried a torch for firefighter Ethan Bishop since high school. And now that his long-term girlfriend has left him brokenhearted, she's free to go after what she's always wanted.

Not that Ethan sees Bailey as anything but a friend. A best friend maybe, but still not a woman he'd be interested in. Pining for his ex has made him blind to the possibility of happiness with anyone else.... But can Ethan resist a woman who knows what she wants?


FEW SIGHTS IN Brookhollow, New Jersey, were as jaw-dropping as the scene taking place in front of fire station number five: fire truck washing day. Watching five of the twelve firefighters, shirtless and a little sweaty, soaping up and hosing off the big red engines was by far the highlight of any summer’s day in the small town.

Cutting the engine of her cherry-red Kawasaki Ninja, Bailey Sheppard removed her helmet, letting her dark hair cascade over her shoulders. She swung her leg over the bike and, tucking the helmet under her arm, unlatched her tool kit from the back of the motorcycle. Squinting in the bright, early-morning sunlight, she weighed her options. Should she attempt to enter through the open bay doors or go around to the side entrance?

Knowing she’d never make it through the front bay doors where the men were working without getting drenched with the freezing water, she jogged unnoticed around the big brick building. The dousing would be refreshing, but her dark blue coveralls with her name embroidered on the left front pocket would take forever to dry, even in the blazing August heat.

A long line of women waited at the door and Bailey hid a smile as she approached. It was almost nine o’clock on the first Friday of the month, the day the fire hall provided free blood pressure and cholesterol screening. The Bishop brothers, Jim and Ethan, had set up the free program after their grandfather had experienced a series of strokes the year before. Like many seniors in the community, he’d neglected to visit the local medical clinic regularly, and his high blood pressure had gone undetected.

The fire hall’s staff was continually looking for ways to give back to the community. While there were always a few women, young and old, waiting to be checked at the free screening, today there was quite a lineup. Bailey suspected some of the blood pressure results were going to be a little higher than usual. Brookhollow’s local heroes were as handsome as they were brave. Having grown up with them in the small New Jersey town of less than ten thousand residents, she’d dated most of them at one time or another throughout their junior high and high school years, all except Ethan Bishop—the one she wanted.