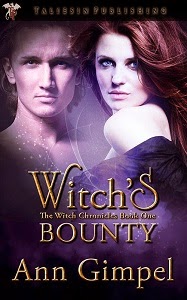 A demon-stalking witch teams up with a Sidhe, but their combined power, never mind their love, may be too late to make a difference.

One of only three remaining demon-stalking witches, Colleen is almost the last of her kind. Along with her familiar, a changeling spirit, she was hoping for a few months of quiet, running a small magicians’ supply store in Fairbanks, Alaska. Peace isn’t in the cards, though. Demons are raising hell in Seattle. She’s on her way out the door to help, when a Sidhe shows up and demands she accompany him to northern England to quell a demon uprising there.

Duncan swallowed uneasy feelings when the Sidhe foisted demon containment off onto the witches two hundred years before. He’s annoyed when the Sidhe leader sends him to haul a witch across the Atlantic to bail them out. Until he sees the witch in question. Colleen is unquestionably the most beautiful woman he’s ever laid eyes on. Strong and gutsy, too. When she refuses to come with him, because she’s needed in Seattle, he immediately offers his assistance. Anything to remain in her presence.

Colleen can’t believe how gorgeous the Sidhe is, but she doesn’t have time for such nonsense. She, Jenna, and Roz are the only hedge Earth has against being overrun by Hell’s minions. Even with help from a powerful magic wielder like Duncan, the odds aren’t good and the demons know it. Sensing victory is within their grasp, they close in for the kill.

…The bells around the shop door clanged a discordant riot of notes. “Crap!” Jenna shot to her feet. “I should have locked the damned door.”

“Back to cat form.” Colleen flicked her fingers at Bubba, who shrank obligingly and slithered out of clothing, which puddled around him. She snatched up his shirt and pants and dropped them back into the canister.

“I say,” a strongly accented male voice called out. “Is anyone here?”

“I’ll take care of the Brit,” Colleen mouthed. “Take Bubba to the basement and practice.”

She got to her feet and stepped past the curtain. “Yes?” She gazed around the dimly lit store for their customer.

A tall, powerfully built man, wearing dark slacks and a dark turtleneck, strode toward her, a woolen greatcoat slung over one arm. His white-blond hair was drawn back into a queue. Arresting facial bones—sculpted cheeks, strong jaw, high forehead—captured her attention and stole her breath. He was quite possibly the most gorgeous man she’d ever laid eyes on. Discerning green eyes zeroed in on her face, caught her gaze, and held it. Magic danced around him in a numinous shroud. Strong magic.

And then she knew. Daoine Sidhe. The man had to be Sidhe royalty. No wonder he was so stunning it almost hurt to look at him.

Colleen held her ground. She placed her feet shoulder width apart and crossed her arms over her chest. “What can I help you with?”

Okay, so he knows who I am. Doesn’t mean a thing. He’s Sidhe. Could have plucked my name right out of my head. “That would be me. How can I help you?” she repeated, burying a desire to lick nervously at her lips.

“Time is short. I’ve been hunting you for a while now. Come closer, witch. We need to talk.”

Ann Gimpel is a mountaineer at heart. Recently retired from a long career as a psychologist, she remembers many hours at her desk where her body may have been stuck inside four walls, but her soul was planning yet one more trip to the backcountry. Around the turn of the last century (that would be 2000, not 1900!), she managed to finagle moving to the Eastern Sierra, a mecca for those in love with the mountains. It was during long backcountry treks that Ann’s writing evolved. Unlike some who see the backcountry as an excuse to drag friends and relatives along, Ann prefers solitude. Stories always ran around in her head on those journeys, sometimes as a hedge against abject terror when challenging conditions made her fear for her life, sometimes for company. Eventually, she returned from a trip and sat down at the computer. Three months later, a five hundred page novel emerged. Oh, it wasn’t very good, but it was a beginning. And, she learned a lot between writing that novel and its sequel.