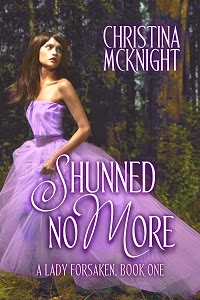 A Lady Shunned by All...

Lady Viola Oberbrook only wanted to forget the ill-fated early morning duel that took the lives of two young, wealthy, promising men of the ton and sent her fleeing for her father’s country estate. Eight years later, she has her life in order: a fulfilling business, a few trusted friends, and no plans to return to London society. What she doesn’t expect is to come face to face with her past.

A Lord Betrayed by One...

Brock Spencer, Earl of Haversham, only wants vengeance. Recently returned from his military service to the King, his plans include repairing his family estate, finding a bride, and destroying the girl responsible for the untimely death of his twin brothers. What he doesn’t anticipate is falling in love with the only woman who should never be part of his future.

An Impossible Match, Destined to Be...

Add Shunned No More to your Goodreads Shelf

Viola clutched the handle of her pink parasol to her chest tightly in anticipation of the spectacle to come. Her gaze fixed on the two figures shrouded in the early morning fog of Hyde Park. The men, really only boys, began to count as they paced away from each other. Shiny, pearl-handled pistols positioned in their right hands were at the ready.

She clamped her lips tight to suppress the giggle that threatened to escape.

Who would have thought that she, Lady Viola Oberbrook, would have two men seeking her hand in marriage...and in the first week of her very first season, no less? That they were the twin sons of Lord Haversham was an even greater coup de grǎce for her. She’d be the envy of every debutante. The talk of the town. As well she should be! Her father was the Duke of Liperton, after all.

If only she’d found a way to get all of London here to witness the duel. She’d done what she could by leaving word with Mrs. Tenchard. The old gossipmonger was sure to spread the word more quickly than Vi could spend her monthly allowance at the milliner’s shop.

And Vi prided herself on her ability to spend her father’s money.

“Miss Viola, beg’n yer pardon, but it be wise to don ye wool kid gloves,” her lady’s maid, Sarah, whispered beside her.

“Shhhh,” Vi hissed in return, raising her hand for Sarah to hold her tongue. She didn’t want to miss a single moment of what was to come. She would remember this for the rest of her existence. The day two men of the haute ton battled in her honor. She sighed.

The twins—Cody, with his hair cut longer than the current fashion permitted, and sporting a determined glint in his eye, and Winston, with his smartly trimmed blond hair falling respectfully above his collar—reached the required twenty-pace distance and turned.

Their pistols fired in unison. Vi’s heart soared. Her first duel...and certainly not her last, if she had anything to say in the matter.

The swift morning breeze pushed the smoke from the scene as both men dropped to the ground, soggy with morning dew. Shouts of urgency rang out in the air. Men rushed in to assist the twins.

A cold chill inched up her spine; her breath caught in her lungs.

A sharp inhale of breath sounded next to her, but Vi was hesitant to remove her attention from the scene as the pungent smell of a spent firearm reached her.

“Call Doc Durpentire. Post haste!” bellowed Mr. Rodney Swiftenberg. As a distant relative of the Havershams’, Swiftenberg stood as Cody’s second during the duel. Others, vaguely familiar, knelt over both fallen men.

The gossip rags would have much to write about this day. Vi could hardly wait to see her name in print. Maybe her father would increase her dowry, seeing as she would be in high demand by the day’s end.

“Miss,” Sarah called. “I think it best we be head’n home. Ye Pa is going to be right mad when he finds you snuck out and now these poor men be lying dead at ye very feet.”

“Surely you jest. They are simply play acting for dramatics...in my honor, I do suppose.” Viola eyed the two groups of men where they stood, their heads shaking in turn. One took his coat off and laid it gently over Cody’s still body. Vi’s glare snapped to Winston, where another man shook out a horse blanket. The thick, coarse material drifted on the morning breeze and settled on the second body.

She studied the scene in front of her. It had the potential to be ever so romantic. A story she would regale her grandchildren with. It was a shame neither twin was the first born and, therefore, unworthy of her hand. But she’d seen no reason to inform them of this minor issue and spoil her fun. They’d find out soon enough.

Slowly, the eyes of every person present settled on her. She took a step back at the harshness of their stares. Her chilled hand rose to cover her mouth. She wanted to tell them to avert their eyes; she was the daughter of a Duke. They need show the respect due her. None of these men held a title higher than Baron. How dare they look at her thus?

A tall, slender man carrying a large cloth bag rushed to Winston. She assumed this was Doc Durpentire. He would have both men patched up in no time. But with both Cody and Winston taking a bullet, their feud would not be resolved. Viola imagined what the pair would think up next to prove one deserved her hand over the other. Perhaps a curricle race through Mayfair District. She knew she would be able to convince Cody to let her ride along on the adventure. She could practically feel the wind against her face as the carriage took the corners at a high speed, shifting across the seat so that her soft body might come to rest against Cody’s hard one.

Imagine what the silly, empty-brained young females would think. They’d envy her further. An unbidden smile played across her lips.

The doctor drew the heavy blanket aside and his hands moved over Winston’s body. Then, they stilled. His head dropped forward. He spoke to the men around him, but Vi was too far to hear their conversation.

Rodney, hands shoved deep in his pockets, moved in her direction.

“Whatever is the matter with them?” she asked when he was close enough to hear.

“I think you should go, Lady Viola. This is not a scene any innocent maiden should witness,” Rodney replied. His blond hair was so much like Cody and Winston’s, but his attitude had always struck her as arrogant for a man with no title or wealth to speak of.

“Who are you to order me about?” Viola closed her parasol with a swift click and handed it to Sarah, her hands coming to rest on her rounded hips.

“It is not the time for this. My cousins...they are both dead.” Rodney paused. “I must alert my uncle to his misfortune.”

“I assure you, no mistakes have been made this day.” He abruptly turned, stalking back to the crowd gathering between the fallen men.

He must be jesting, Viola thought. She looked between the fallen pair again, their motionless bodies so at odds with the twins she’d come to know in recent days. The heat of exhilaration drained from her as a hand settled at her elbow. Viola felt the calloused fingertips through her thin morning cloak.

“We should be going, Miss.”

Vi shook Sarah’s imploring touch from her arm and tried to focus her gaze on something—anything—other than the lifeless men on the ground.

“Well,” Viola stated. “This was…” Dread clawed at her insides, and her spirit shattered as she stared at the two men lying prone and unmoving before her. “…unexpected.” Her entire life had been leading up to this moment—a life of societal demands and the rigors one had to follow to be accepted. A life that had just stopped, as quickly as those of the two men who now lay dead. Dead. She had murdered these men—the realization came at her all at once, even as her mind rebelled. Cody and Winston, the silly twins who had entertained her so, were no more. Yet, she continued to breathe. With each breath, standing in the chill of early morning in Hyde Park, she felt the obligations of her station, its standards and protocols too powerful for a seventeen-year-old girl to overcome.

She glanced around her for help, for someone to tell her what to do, but all focus was on the boys on the ground. Years of being taught how to behave hadn’t prepared her for anything like this.

“I suppose we should…” She cleared her throat. “I suppose it is time to start over.” She sensed, somehow, that starting over might be impossible.

“Start over, Miss?” Her maid’s dark brow pulled low over her eyes.

Viola straightened her already impeccably postured back and forced her prized smile before continuing. “To find another suitor, you silly girl! This time, I intend to set my sights a bit higher.” She spun on her heels, determined not to stumble, to not falter before so many. She started back towards her carriage, moving through the men without meeting anyone’s eye,  feeling the weight of their stares as she passed. It didn’t matter. She had the evening’s entertainments to prepare for and an image to uphold—no matter the cost to her soul.

Christina McKnight is a book lover turned writer. From a young age, her mother encouraged her to tell her own stories. She’s been writing ever since. Currently, she focuses on Historical Romance, Urban Fantasy, and Paranormal Romance.

Christina enjoys a quiet life in Northern California with her family, her wine, and lots of coffee. Oh, and her books…don’t forget her books! Most days she can be found writing, reading, or traveling the great state of California.

3 ebook copies of Shunned No More