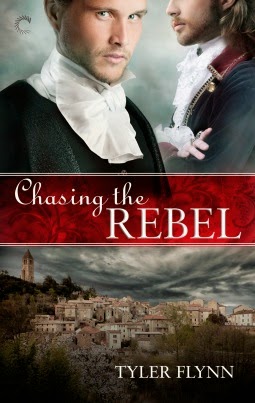 Marcus, Lord Rothbury, is on the run. Part of a foiled plot to help King Louis and Queen Marie Antoinette escape to Switzerland, he’s searching for the jewels the rebels stole from the queen—jewels that, when sold in England, will buy the monarchs’ freedom and restore the aristocratic order Marcus holds dear.

Pamphleteer James Lockhart publicly condemns the monarchy and has his own plans for the jewels—selling them to help the Parisian poor. But when the two are thrown together against a common adversary, Marcus finds himself increasingly attracted to the impetuous American.

As they hunt for the jewels, Marcus begins to suspect his companion isn’t all he seems. Secretive and changeable, James could be playing a double game, and Marcus can’t be sure who James is fighting against—the enemy, or the man who’s fallen in love with him.

The French Revolution is not an era I have read about before in the context of a male/male romance and it was a delight to see something different in the historical genre.

Marcus Rothbury is an English aristocrat who has spent a lot of time at the French Court (I am unsure why, that was ever explained in the book, just that he was there.) The royals have been ousted and are foiled in their escape to Switzerland ahead of the mob. With the Queen's jewels stolen by the rebels, Marcus is determined to find them, return to England to find some royal sympathisers and use to jewels to help free the king and queen.

James Lockhart on the other hand, is an American who thinks the royals got what they deserved and he wants to find the jewels too, but not to save the king and queen, but to sell to feel the poor of Paris.

Both of them fall afoul of rebel soldiers and are thrown together, but it soon becomes clear that these two men already have a history already.

In Paris, both of them frequented a certain coffee house, where men can debate all the things of the day and also seek out other men of their persuasion. Rothbury and Lockhart have already spent one very passionate night together, but for Rothbury that's all it should be. He has dallied before, but never with the same man twice and he keeps rebuffing Lockhart's advances while the two of them are on the run through the wood and searching for the jewel thief.

Rothbury knows he had duties and responsibilities back in England; he must marry and secure an heir for his estates at Winterton, but Lockhart sorely tests his resolve.

Both characters are from different ends of the spectrum: Rothbury is a fine upstanding citizen, who wants to do what is right and his own desires should take second place. Lockhart is more of a free spirit, what he wants he goes after and he goes after Rothbury a lot.

It's a fun romp through French countryside, with our heroes trying to stay one step ahead of the men hunting them, getting captured, getting rescued, captured again and you think the rebels aren't very good at keeping their prisoners confined. The book is told entirely from Rothbury's point of view, so like Rothbury, the reader doesn't know what Lockhart's true intentions are which keeps the tension rising a bit.

The banter between the two of them is very amusing and you can almost feel Rothbury's exasperation with this free-spirited American who says what he thinks and feels without worrying about the consequences.

It's an enjoyable read, but I did feel the ending wrapped everything up rather too neatly, but I won't say any more in case I spoil the story.

If you like historical M/M romance with quite a bit of unresolved sexual tension - eventually resolved, then this might be for you.