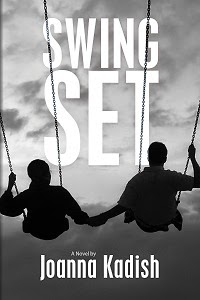 Shelly and her husband Steve are bored with their sex life. They search for something a bit more stimulating, leading them to try a new world of oral sex classes, internet pornography, and sex clubs. Their enjoyment reaches heights they never could have imagined, and yet they keep pushing the boundaries, soon they're involved in partner swapping and triads. This journey of self-discovery takes them to some unexpected places, and they learn surprising new things about each other.

Along the way three women come together and learn to support each other, amid deepening friendship and loyalty. Written in a style that is best described as Tom Perrotta meets Alison Espach, Swing Set shows from a woman’s point of view how free-ranging sexual experimentation can affect a relationship, and how a hobby can become an obsession in a thoroughly modern, internet-savvy world where sex is simply another haute appetite.

I strolled down the street away from my car, into the quickening dusk, my spirits ascending as the rich tones of his deep voice swelled like the notes of a violin through the phone, my heartbeat quickening with desire. I was wearing a sand-colored linen suit, looking very elegant on the outside, but inside I was all quivering need. I longed to be loved by someone new, I’m not sure why, maybe because we had obsessed so many times over these videos and pictures on the Internet. And also, there was so much I couldn’t talk about with Steve, I was always too afraid I’d say something wrong, some little thing that I didn’t mean to sound hurtful but he would take it that way. I was living with the legacy of a Holocaust survivor, not an easy thing for someone whose parents were not only hostile to each other, but they were both poor listeners.  They talked over each other. The scene was getting really heavy, and I was reeling from everyone’s trauma, past and present.

A hint of a breeze rustled my hair, but I didn’t notice it—that’s how far gone I was, shivering even in that warm, humid air, my teeth chattering. To the west, the sky loomed expansive, cloudless, a deep purple with pinks and lavenders lingering along the horizon. I was blind to the beauty around me. I focused completely on his voice, breathing deeply when he started speaking again, a shudder running though my body. A sweet lemony scent from the abundance of evening primrose filled my nostrils.

“Come here now and have sex with me,” he said.

“My husband’s expecting me. I told him five minutes ago I’d be heading home around now. I’m not a good prospect. You’d be better off looking elsewhere.” To my ears, my own voice sounded a plaintive longing as I demurred, my days of impetuosity long gone. But I couldn’t stop these raw feelings of physical want that kept rising inside me, along with the need to be adored without all the baggage and recriminations that colored my relationship with Steve.

“I feel the same way.” My desire for him was bubbling within me, in mortal danger of spilling over and causing some mishap. “But I’m married. I can’t sneak around, not even when we’re not getting along, like now.”

“He’s more important than your happiness?” He sounded animated.

“At the moment…yes.” Couldn’t he see that I couldn’t just take off—that my husband would kill me?

I told him good-bye as firmly as possible and clicked off. I was driving my car with a mile to go yet when my cell phone rang again like a five-alarm fire. I fumbled for it, picking it up at the last ring, idly wondered if it was Steve calling to yell at me for being late. He was probably hungry, waiting for me to eat. I floored the accelerator.

“I’m nearly there,” I said without listening for Steve’s scold.

“Without my help?” His breathless, deeply masculine voice carried through the airwaves, invading the inner recesses of my car. “Without me…?”

“Who’s this?” I stalled, although I instantly recognized that singular voice. I felt a prickle of heat warming my groin.

“You sound luscious when you’re uncertain…makes me want to kiss you.”