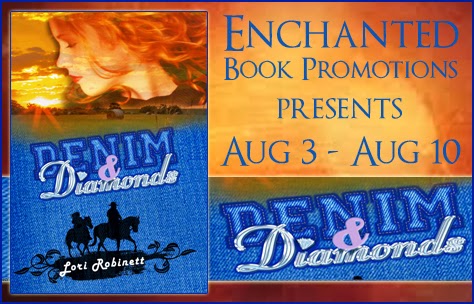 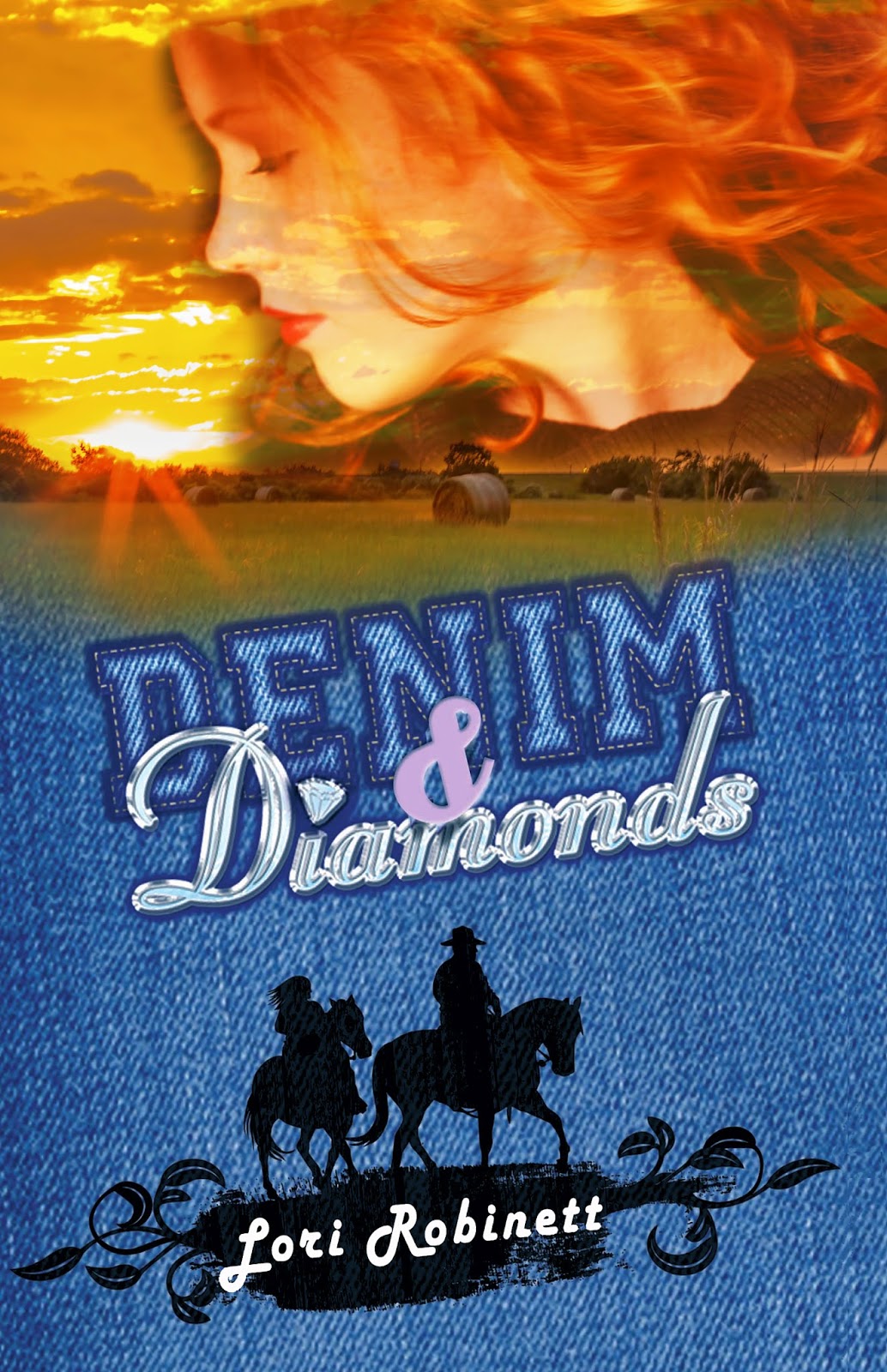 Attorney Beth Jameson might know her way around the courtroom, but doesn’t know a cutting horse from a carousel horse. That doesn’t slow her down when her estranged father dies and leaves her his horse ranch just south of Kansas City. True to form, the gift comes with strings attached – she has to be successful in her first year, or she loses her inheritance. All of it.

Beau, the handsome ranch foreman, was her father’s right hand man, but she must convince him that she’s in it for the long haul – that she isn’t just some city girl that doesn’t respect her father’s legacy. She has to learn the business from the ground up, and must learn to trust others – not an easy thing for a woman who was abandoned by her father and then by her ex-fiancé. Beth can’t believe how quickly the ranch becomes home, and how hard she is willing to work to make it hers . . . and learns that everyone deserves a second chance at happiness.

Lori is a creative soul trapped in a paralegal's body. As a child, she wrote pages and pages in longhand. As a teenager, she pounded away on a typewriter. As a college student, she learned about criticism (death to English Comp!). As an adult, she found her hours filled with work and parenting. Then, she rediscovered the joy of escaping into a world of her own creation.

She lives in rural Missouri with her husband and daughter. A very spoiled Miniature Schnauzer and Miniature Beagle allow Lori and her husband to live in their house, and the outside is patrolled by BK (short for Barn Kitty) and Patches (a sweet tom cat stray that missed his calling as a lap cat).

Lori has been writing since she was a kid (Stephen King has been her hero since the librarian used to sneak her into the 18 & older section of the local library), but then life got in the way and her dream of writing the Great American Novel had to wait. After the death of her best friend at the age of 34 (cancer), Lori realized that today’s dreams can’t wait. Her husband bought her a laptop and encouraged her to start writing. She discovered National Novel Writing Month, an international writing competition that encourages writers to turn off the internal editor and write with abandon. The challenge is to write a 50,000 word novella in 30 days. That first year, in a caffeine-fueled frenzy, Lori wrote Denim & Diamonds. Since 2004, Lori has won National Novel Writing Month eight times and served as a Municipal Liaison for the Fulton group of NaNo’ers. Her novels cover everything from romance to thrillers, but mystery is the thread that binds them all together. Her favorite authors are Colleen Donnelly, Paul Doiron, Lea Waite, James Patterson, Stuart Woods, Hugh Howey, HP Mallory and, well, the list goes on and on.

The book can be purchased at Amazon | BN |

and from the publisher (autographed copies as well as other items available also):
http://carypress.com/denim-diamonds-by-lori-robinett/

The more I write, the more I plan. When I wrote Denim & Diamonds, it literally flowed. All I had when I started was a general idea about someone who had to move to a horse ranch and run it. I spent my commuting time every day talking into a tape recorder. Now I use Scrivener and do more planning and plotting.

Oh, yes. They chatter to me quite often. I love it when I'm in the middle of something else and a character tells me something new, something I had never even considered. And sometimes a character I think of as a secondary character shoulders their way onto the main stage!

Mmmmm. That's a tough one, because I really like food. Chocolate. Potato chips (homemade, especially . . .). Ice cream. But let's go with pizza. I could eat pizza every day.

A night owl. I'd love to be able to sleep all day and work all night. When I was in college, I would stay up late to study, read, clean, then I'd sleep in. But now I'm kinda forced into a schedule and am nearly always in bed by 10 so I can get up at 6.

Everywhere. There are a lot of places on my bucket list: the UK, Ireland, Scotland, Australia, Egypt, Greece. Top of my list, though, is Ireland. I dabble in genealogy and my mother's family traces back to Ireland. I've even got photos of Stradbally Hall, which is still owned by the Cosby family. It would be amazing to see the places I've read about, and to look at the portraits of my ancestors and distant relatives.

The book I am currently editing is set on Mount Desert Island, Maine. That's pretty distant for me - and was really a step outside of my comfort zone, because I've never been to the East Coast. I did a lot of Youtube video watching, and followed a lot of Maine news sites on Facebook. It's amazing how much information is available online. And I catch random people in public and ask them questions. While on a camping trip last month, I ran into a couple from Maine, so I peppered them with questions.

Sometimes. While I wrote Denim & Diamonds, I listened to a lot of Frank Sinatra. Most of the time, though, I write in the living room while my husband is watching television. Even when I'm in my scraproom writing, I'll usually have a movie going. I don't like it to be quiet - I need some kind of background noise.

Denim & Diamonds is so exciting for me, because it was the first book where I actually wrote those two magical words, "The End." It's the story of a woman whose life is falling apart, and then she's given the opportunity for a second chance when she finds out she must run her father's horse ranch for a year. She leaves her high powered career and city lights behind, and finds the home she's always wanted.

Oh, my gosh, so much. I thought it was so simple when I first started. Write and get published, right? No. Write, critique, edit, rewrite, develop characters, create setting, think about arc, edit and rewrite, and then you can finally start to polish. ;o) Seriously, I had no idea when I started that writing is a craft, that needs to be studied, learned and mastered.

I would have started approaching this as a business much sooner. I would keep better records (all those ideas floating around . . . I've lost a lot of good ones on sticky notes!), and would have a plan.

Stephen King has a big influence on my writing. His book, On Writing, is one of the best craft/inspirational books I've ever read. I devoured his books as a kid, and still have a bookcase dedicated to his books. More recently, my writing has been influenced by Tawna Fenske. She does a great job of connecting with her readers, and her books are so much fun to read.

Don't rush it. Invest in yourself. Read and study craft books like On Writing. Attend writing conferences. Find a critique group.

Oh, that's a tough one, too. So hard to choose . . . But I think I'll have to go with Tawna Fenske. At least, she's my favorite right now. She did an ebook recently called Getting Dumped that was absolutely brilliant. It's a callback to the Choose-Your-Own-Adventure books I devoured as a kid.

Attorney Beth Jameson might know her way around the courtroom, but doesn’t know a cutting horse from a carousel horse. That doesn’t slow her down when her estranged father dies and leaves her his horse ranch just south of Kansas City. True to form, the gift comes with strings attached – she has to be successful in her first year, or she loses her inheritance. All of it.

Beau, the handsome ranch foreman, was her father’s right hand man, but she must convince him that she’s in it for the long haul – that she isn’t just some city girl that doesn’t respect her father’s legacy. She has to learn the business from the ground up, and must learn to trust others - not an easy thing for a woman who was abandoned by her father and then by her ex-fiancé. Beth can’t believe how quickly the ranch becomes home, and how hard she is willing to work to make it hers . . .

Beth took Beau's hand in hers and led him to the lobby, where everyone milled around. A table filled with wine glasses sat to the side, so he excused himself and got wine for them. When he returned with the drinks, she was talking with a man in a well-fitted gray pinstriped suit. With her heels on, she looked the man directly in the eye. The two leaned towards each other, gesturing and smiling. Beau was surprised to feel a stab of jealousy as he made his way through the crowd, careful not to spill any of the red wine she'd requested.

“Thank you, Beau!” Beth said as she accepted the glass of wine from him. She touched the other man on the arm. “Jackson, this is my ranch foreman, Beau Frakes. And Beau, this is Jackson Steele. He is the executive vice president of FirstBanc.”

Beau offered his hand, “Nice to meet you, Mr. Steele.”

“Call me Jackson. Nice to meet you, too. I’d better get back to my seat.” He leaned towards Beth and whispered loudly, “I’m babysitting one of our clients and you know how demanding those old women can be!”

“All too well, Jackson. Good to see you,” Beth said warmly.

“Don’t be a stranger, Beth,” Jackson winked at Beth, then directed his attention to Beau, “You take good care of your boss and make sure she comes back to us in one piece.”

The man’s final words echoed in Beau’s head. It occurred to him that Beth might return to the City once she served her one year term at the ranch. And why wouldn’t she? She was a successful, sophisticated lawyer at one of the most prestigious firms in Kansas City. What was there to keep her at the ranch? What if she finished out the year, and then sold the ranch?

Even though he and Charlotte had been preapproved to buy the ranch if Beth failed at her task, he was growing attached to the lady beside him. It grew more difficult with each passing day to remember that she was his boss, and he was her employee – nothing more.

“I know you don’t want to be here, but you don’t have to be so obvious,” Beth whispered.

Beau sighed, tossed back his glass and swallowed his wine in two gulps. He took her by the elbow with the intention of walking back towards their seats. Instead, he caught her off guard and she bobbled her glass, spilling wine right down her plunging neckline. It was a perfect shot down her cleavage.

There’s a tour-wide giveaway for a $20 Amazon Gift Card.