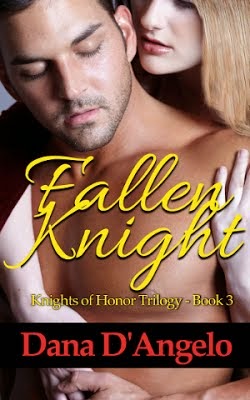 For breaking the sacred vows of knighthood, Gareth de Mowbrey is banished to the outer realms of the kingdom. He is broken down and is plagued by the demons from his past. He has lost everything, his reputation is in shreds, and he is walking the path of self-destruction. That is, until he meets one woman who may have the power to save him from himself...

Clarisse de Servian knows that her duty is to marry the man that her family chooses for her. But even for the betterment of her people, she cannot bring herself to wed a man she does not love. She does however fall in love with a man who is forbidden to her, and for once she enjoys happiness. But this happiness is only fleeting, for Clarisse possess a dark secret that threatens to destroy her and everyone she loves.

Note: Although part 3 of the Knights of Honor Trilogy, this story can be read as a stand-alone book.

Gareth reached over and with one finger, he brushed it against her cheek. Unable to help it, her body flushed hot and cold and she shivered. She wasn’t sure what had come over her, and she took a step back.

His hand dropped to his side. “There was flour on your face,” he murmured but he made no move to come after her.

“Thank you,” she said, rubbing her face, now feeling foolish. Gareth was an altogether different man, she reminded herself. He was not the one who pervaded her nightmares.

A silence fell between them, although she was acutely aware of the man who stood before her. His heated gaze fell to her lips, caressing them with his eyes and causing her to feel warm.

“I should escort you back to the great hall,” he murmured, “yet here I am hesitant to do so. Why is that?”

“I am not certain,” she said slowly.

His eyes had darkened and the look on his face caused a strange whirling in her stomach. But the sensation wasn’t caused by fright, she knew. Gareth had never done anything to frighten her, yet his physical presence suggested that he was capable of doing great harm. She should actually be leaving the kitchen this instant, but her feet felt as if they were stuck to the stone floor. A curiosity took hold of her and as the seconds passed by, its intensity grew.

“May I kiss you, Clarisse?”

Her lips parted, while her gaze went down to his mouth. Every fiber in her body wanted her to say yes. His heat drew her in and for some inexplicable reason she knew that once his firm lips touched hers, she would reel from the heady passion that she only heard about in stories…

Dana is the only girl from a family of nine children. As a teenager, there was a constant battle for the T.V. remote, which she lost so she was forced to find her amusement in books. Soon after she discovered historical romance novels from best selling romance writers like Johanna Lindsay, Judith McNaught and Julie Garwood. She read as many as 10 romance books per week, and spent hours with her nose pressed between the pages, skipping meals and cutting out sleep. Medieval romance and love in the Regency era was just too exciting.

It wasn't until she was married with two young kids that she decided to take a stab at writing her own historical romance books. She is intrigued with the idea of writing romance fiction that could bring hours of enjoyment to readers, help them escape from reality, and perhaps remind them how sweet love is and should be. These are the things that she enjoys as a reader, and these are the things that she wants to give back as a writer.

Dana resides in a city east of Toronto, Canada. When not writing or reading, she's dining at local restaurants with her husband and kids and enjoying the spectacular foods of the world.