Though I’m here at Books & Tales today ostensibly to talk about my newest book, I’d like to use the space to talk about someone else instead.

It seems appropriate to discuss him here as he was a wonderful British writer of fantasy. And so unfortunate that I have to use the past tense in saying that, as he died on September 9. He was only 59 and it came as a shock to me since I’d missed that he’d been diagnosed with aggressive lymphoma last summer.

I met Graham at World Fantasy Con in Toronto in 2012. It was my first time going to that convention and I was nervous about how it would go. As a writer of Fantasy Romance and Fantasy with strong romantic and sexual themes (along with erotic romance!), I knew I might not be treated as a “real” writer of fantasy. I’d heard all sorts of horror stories about how female writers of Sci Fi and Fantasy weren’t treated well by the more male-centric SFF community – and those were women who wrote much more conventional works than I did, with far less girl cooties than mine.

The WFC12 staff offered me the opportunity to moderate a panel on the concept of changelings in fantasy literature. At that time, the first book in my Covenant of Thorns series, Rogue’s Pawn, had just come out. I knew that theme would figure in heavily by the time I was done, but it wouldn’t be clear to readers until, well, now – with book 3, Rogue’s Paradise. So I snapped up the opportunity as a chance to clarify my own ideas by prompting discussion among some amazing authors. The people on that panel were Holly Black, Karen Dales, Sean Williams and Graham Joyce.

I still have Graham’s emails to me about it. Odd to read his vibrant voice there, knowing he’s gone.

To be a good moderator, I read up on the panelists’ relevant work – at least some, as time permitted. Graham sent me a copy of Some Kind of Fairytale and I just inhaled it. It’s an amazing, haunting tale of a young woman returning home after having gone missing for ten years, claiming she was abducted by fairies.

The panel was amazing. Smart. Exciting. People said brilliant things and I learned a great deal. Many people came up later and said it was the best panel of the con. I particularly remember one moment when Graham burst out, interrupting someone else with an excited idea. He turned to me and the woman he’d interrupted immediately to apologize – because I am a strict moderator about people waiting their turn to speak – and we both laughed and waved him on, saying he’d clearly been struck with something important. And it was. During that panel, he more than anyone, helped me understand why the concept of the changeling fascinates me.

More than that, he made me feel welcome. Though I was a newbie compared to him, Graham treated me like a fellow writer. We had a drink in the bar and a terrific conversation. I imagined then that it was the beginning of a friendship, not the last time I’d see him.

One of the best parts of being a writer is getting to make writers you admire be your friends. I always consider Graham to be one of mine. And my books are better for knowing him. 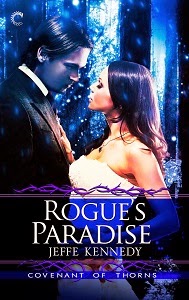 Pregnant, possessed, and in love with a man I don’t dare to trust-those are the consequences of the risks I took to save my life. But Faerie, the land of blood and magic, is filled with bitter ironies, and the bargains I made now threaten me and my unborn child.

The darkly sensual fae noble Rogue still tempts me to danger and desire. As we await the birth of our child, I’ve been forced to question whether our offspring is part of a bargain Rogue once made to save himself. He can’t tell me the truth due to a spell the vicious Queen Titania has him under. Would he betray our family against his will? Could I ever forgive him if he does?

Rogue insists on an eternal commitment from me, even as Titania’s forces close in on us. I don’t know if Rogue and I can withstand her onslaught, or that of the beast within me. But I will not stop looking for answers-even if it brings the walls of Faerie crashing down.