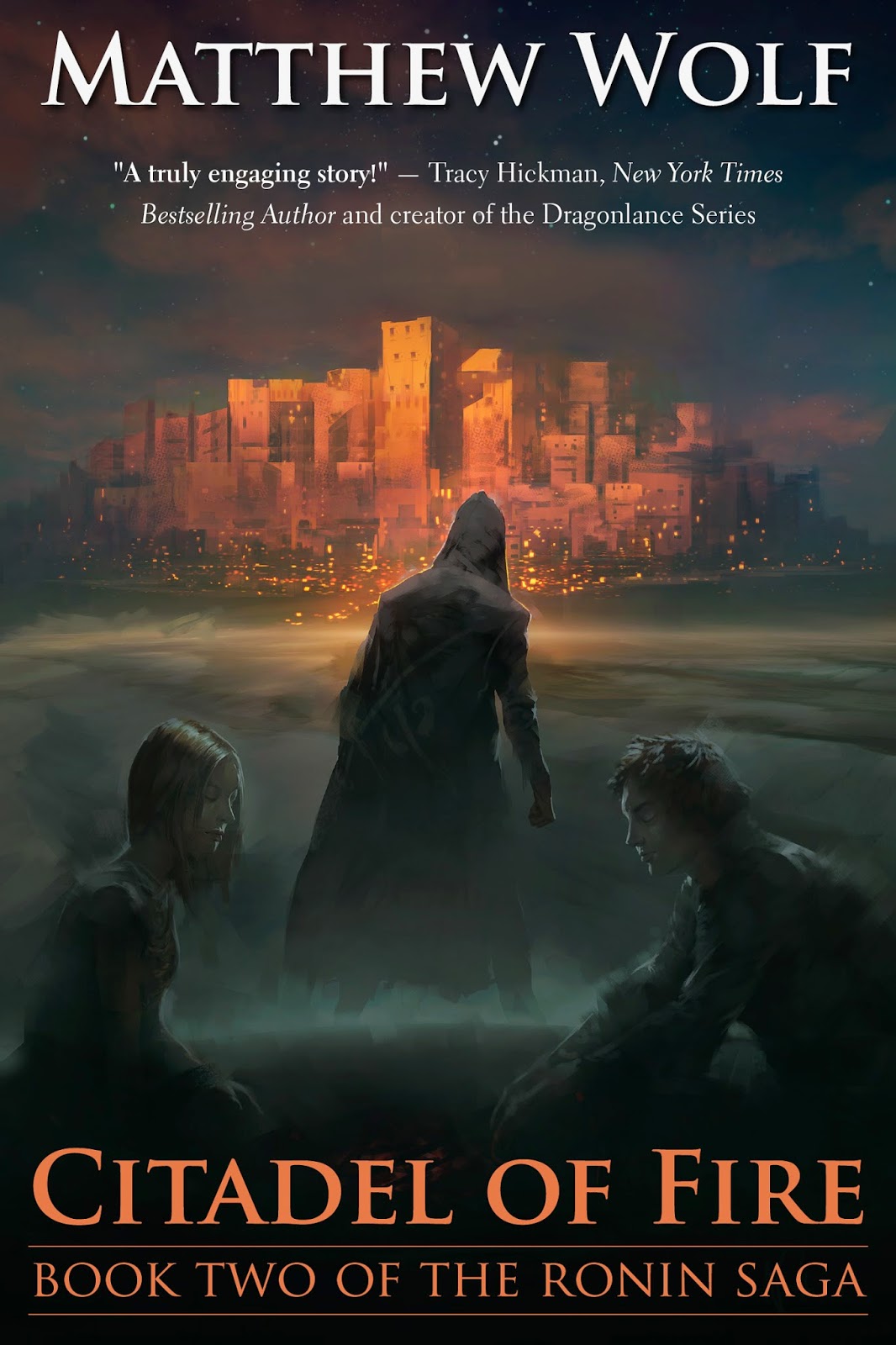 Seventeen-year old Gray is descended from a legendary hero known as a Ronin and haunted by his forgotten past.  He returns home to a wizards' keep, unaware he is now labeled a murderous traitor for killing his best friend.

Now he must cross a dangerous desert full of thieves, mythical beasts, and other magical unknowns, all to return to a home that may be his demise.  At the same time, a poisonous evil seeks to convert the world to their dark mantra, "strength is life, weakness death."

Gray may have hero's blood in his veins, but how can one kill a belief?

Zane couldn't cool the fire in his veins. Nor did he want to. They had stolen everything from him, and he would take it back, piece by piece. The thought resounded in his head like a tolling bell, and he gripped the gold coin purse tighter as he tore through the desert back alleys, ignoring looks and pushing those who got in his way. He turned a corner and ran face to face with noise, color, and the crush of bodies.

Perfect, the young thief thought. Sheathing his blade, Zane slipped into the folds of the crowds. Sweat and dust filled his nose. The heat of bodies was stifling, but he continued, moving past eager looking men, women, and children. They ignored him, oblivious to the danger he was in. They were all too busy watching the lavish affair in the main thoroughfare beyond. The people of Farbs loved such spectacles. Reavers, Devari, and their ilk, while greatly feared, were also respected like royalty. Royalty who could incinerate your body to ash for looking at them the wrong way.

All knew it was forbidden to enter a procession in progress.

Only once had he seen a man take a step into the streets, and a Devari, emotionless, had cut him down faster than a cutpurse reaching for a coin. Zane had seen death, but this was different. Had it been out of rage or even greed, he’d have understood at least—for both emotions he’d seen in men for as long as he could remember. That moment however... It was the coldest thing he’d ever seen, as if the Devari were cutting a dead branch. A man no more flesh and blood than a hunk of stubborn wood born for kindling. The procession had ambled on as if nothing had happened, the dirt street soaking up the man’s blood like a thirsty patron.

All in all, Zane didn’t care for the spectacle one bit. He caught glimpses of camels, horses, and bare-chested, muscled men carrying a lecarta among other impressive sights—none of it mattered. He cut a path through the crowd, spotting an alley just as the masses began to stir. Looking back, he saw movement behind him.

Grom was pushing a fat merchant out of the way while Salamander stalked behind him. Zane saw his eyes. An unquenchable fury roiled in that dark gaze. Immediately, Zane ducked, but he knew it was too late—Salamander had seen him. Blood and dust, how is the man not dead? He cursed. He can thread, he reminded himself—a fact that meant his death if the foul man caught up with him again. Zane thrust himself through the sweaty mess of bodies. Staying in a half-crouch, as fast as he could, he scurried, hoping not to stir the crowds and give away his position.

For a brief moment, Zane rose to gather his bearings, and saw movement from the opposite direction. More of Darkeye’s men, he knew. He felt it in his gut. They were like arrows flying from all directions, and he was the haystack. Behind him, he saw the bustling procession. Red cloth ribbons waved in the dry air. A band of musicians played flutes, drums, zirods, shambles, and tarzas, ushering the display forward.

He took a heavy breath, eyeing the rumbling ground beneath him. A calm came over him, clashing with his always-thundering heart. They will capture and kill me, he realized.

If it were just him, he’d risk it. But he had to think about Hannah.

They’d come for her too. They’d been pilfering from Darkeye’s Clan for months. They will want blood, and they won’t stop with me. But he was cornered with no way out. Worse yet, if he moved into the thoroughfare, he would be cut down. The crowds crashed around him, and he could see Salamander’s snide, wrathful face bobbing over the heads, nearing with the others at his back.

Something rough grabbed his arm. He turned to see Snaggle, another one of Darkeye’s lackeys. The man’s foul tooth stuck out over his bottom lip. He wore ragged strips of cloth. They hung loose on his bony frame while a tight cap hugged his skull, wisps of hair sticking out from underneath. Zane held the man’s eyes and slyly reached for his blade.

“Ah-ah, I wouldn’t,” Snaggle said, showing off his awful grin as he flashed a glimpse of his long, rusty dagger—curved like his tooth— from within the pockets of his clothes. The man was hideous, but he wasn’t slow. He’d cut Zane to ribbons before his hand would touch his blade, and then he’d leave him bleeding out on the dry desert street. “Where’s the money you stole, you little rat?”

Zane’s fist clenched tighter around the coin purse. “It goes to the people. To those who need it. The real lost souls of this city.”

“Fool,” Snaggle said with a disgusted sneer. “Don’t you know? You fight or you die. It’s that simple. What you’re doing, protecting and suckling those sad men and women, is wrong. It goes against the code of the street. They don’t deserve life.” He scoffed. “You of all people should know that, little rat. It’s the code of the thief.”

Zane ignored the man, glancing back. Salamander was drawing closer. Zane felt the noose closing around his neck. His heart was
now thundering. There was nothing he could do. It was all over.

Die here, or be taken back and let Hannah suffer Salamander’s awful wrath. There was no other option now, and with his back pressed to the procession, there was nowhere to run. He felt true despair rise in the pit of his stomach, overwhelming the roar of the crowds.

Unless... He glanced at the long train.

Suddenly, he had an idea. He visibly slumped, letting go of the rage that always boiled inside him. His head lowered.

“Ah, we’ve finally broken you! I didn’t think it was possible... It seems in the end, you were nothing but a scared rat that needed to be flushed. Salamander will be glad to see the smug fire wiped...”

Zane stopped listening as Snaggle’s grip loosened in victory. He smiled as Salamander pushed through the last of the crowds. Zane looked up. He felt fire and pride rush inside him. Snaggle choked on whatever words he was saying upon seeing his eyes. Zane pulled his arm from the man’s now-loosened grip and leapt into the street.