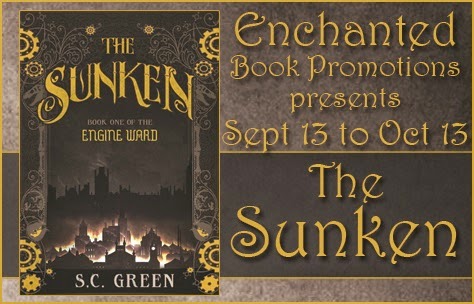 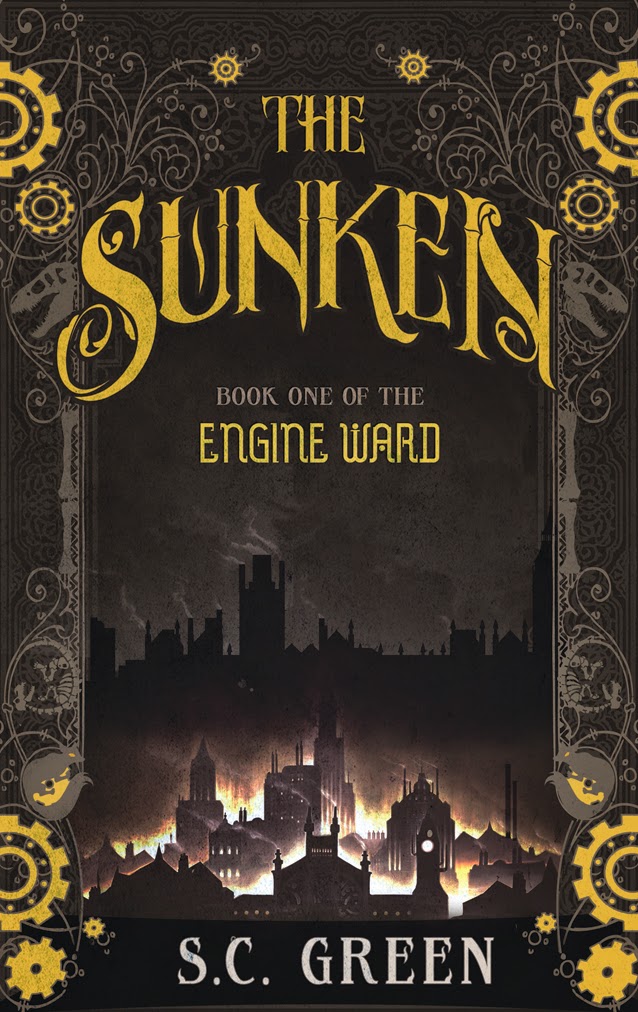 In the heart of London lies the Engine Ward, a district forged in coal and steam, where the great Engineering Sects vie for ultimate control of the country. For many, the Ward is a forbidding, desolate place, but for Nicholas Thorne, the Ward is a refuge. He has returned to London under a cloud of shadow to work for his childhood friend, the engineer Isambard Kingdom Brunel.


Deep in the Ward's bowels, Nicholas can finally escape his strange affliction – the thoughts of animals that crowd his head. But seeing Brunel interact with his mechanical creations, Nicholas is increasingly concerned that his friend may be succumbing to the allure of his growing power. That power isn't easily cast aside, and the people of London need Brunel to protect the streets from the prehistoric monsters that roam the city.

King George III has approved Brunel's ambitious plan to erect a Wall that would shut out the swamp dragons and protect the city. But in secret, the King cultivates an army of Sunken: men twisted into flesh-eating monsters by a thirst for blood and lead. Only Nicholas and Brunel suspect that something is wrong, that the Wall might play into a more sinister purpose--to keep the people of London trapped inside.

Soaking his cloth in the bowl of warm water beside him, Joseph Banks unscrewed the medicine bottle on his lap and tipped a few drops onto the sodden rag. He turned toward His Majesty King George III and motioned for him to remove his clothes.

The King lifted his tunic over his head, and Banks once again marvelled at the results of his treatments. He'd been physician to the King for nearly forty years — for as long as England had been without a Parliament — and his medicine had not only cured the King's madness, but had remarkable effects on his person. At ninety-two years old, George's muscles still retained their firmness. His skin pulled taut around his body, showing none of the telltale brittleness of a man his age. His physique was that of someone forty years his junior, aside from the burns and blotches that marred his once flawless skin — a side effect of Banks’ unusual treatment.

George had barely aged since Banks had begun administering to him. As a wide-eyed youth just out of medical school, Banks had been appalled at the King's rapidly deteriorating condition. The court doctors were stumped, and Queen Charlotte — May Aether protect her soul — had called on him after reading his revolutionary essay about the healing effects of certain lead-based tinctures.

His Majesty had been so incoherent, so close to death, they dragged his son before Parliament and declared him Regent before Banks had even uncorked a medicine bottle. No one expected him to recover, but he did. With remarkable control of his faculties, King George III marched down to Parliament and disbanded it, declaring the Council of the Royal Society the new governing body, and had the Prince Regent — his own son — executed for treason. The other princes died a few months later of an "unknown" illness (brought about by a certain substance Banks added to their brandy), and several of the more outspoken politicians met with a similar fate.

England's new government handled both religious and secular affairs, and proved remarkably effective. The country ran so smoothly that, despite some of his more radical decisions, no one had questioned George's sanity since. At least, not openly.

While Banks tended to his wounds, the King discussed the competition entries. Rolls of drawings, scale models, and intricate moving machetes decorated his private chambers. Whatever entry King George chose, it would be Banks’ job to force this decision on the rest of the Council at their meeting tomorrow. It will take all of my persuasion to convince each Council member not to vote for his own church's designs.

Banks’ hand slipped, knocking a blister off one of the sores. Bright, metallic blood oozed down the King's torso. Banks went to wipe it away, but the King swatted his hand. "Enough of that, Joseph. I have something to show you."

The physician set down the medicine, and the King handed him a roll of drawings. "This is the winning design."

Banks unrolled the first drawing, revealing a detailed map of London, completely encircled in a wide iron wall. His eyes widened as he recognised the hand who had designed it.

"Are you certain, sire?"

"Of course I'm certain." George pulled his tunic on, fastening the buttons with deft fingers. "He couldn't have designed anything better if he were privy to my plans. Since Stephenson refuses to budge, I don't see why Brunel shouldn't be the one to build me what I need."

Panic rose in Banks’ throat. "But sire, it's Brunel. He shouldn't have even been allowed to enter the competition. The Council will never agree—"

"That is why I have you, Joseph. With your powers of persuasion, I'm sure they'll soon see things our way. I knew it was the right decision letting him into the Society."

Banks sighed. "Choosing Brunel will anger the poets, the Aetheriuns, Turner's folk, not to mention Stephenson and his Navvies. This could drive a wedge between the sects that we cannot repair." It will shift even more power into the Great Conductor Sect, was what he didn't say.

"Then it will be time again to purge the Council of my enemies. I want this Wall, Joseph, and any engineer who opposes Brunel also opposes me, is that understood?"

Banks choked back his fear, and opened the plans again. This time, he tried to imagine this monstrosity surrounding the city, the high iron wall crisscrossing the districts, more of a fortress than a city. There had been an attempt, at least, to make it appear less intrusive — the architect had decorated the outer faces with rows of straight Ionic columns supporting a row of decorative arches and pedimental sculpture — homage in iron to the classical motifs so in vogue right now.

George watched Banks scrutinise the plans as he smoothed his clothes. "The design is certainly commendable," Banks managed at last.

"Who is the architect?"

Banks squinted at the name scrawled in the corner. "Nicholas Rose. I've never heard of him. He's certainly not a member of the Royal Society."

"I wouldn't expect Brunel to work with one of the established architects, not with most of them joining Turner's church. You're to bring Brunel to me, Joseph, tomorrow. And I'll see this Nicholas Rose, as well, if you please."

Joseph was about to protest, when a loud crash sounded from across the palace, followed by a long scream, cut haltingly short.

Banks turned to the King, horror in his eyes. "Sir, not again—"

"Attend to that for me, won't you, Joseph?" the King smiled. "It seems another of my children has broken free of the nursery."

Steff lives in an off-grid house on a slice of rural paradise near Auckland, New Zealand, with her cantankerous drummer husband, their two cats, and their medieval sword collection. The first CD she ever brought was Metallica's 'Ride the Lightning', and she's been a card-carrying member of the black-t-shirt brigade ever since.

Steff writes about metal music, her books, living off-grid, and her adventures with home-brewing on her blog www.steffmetal.com. She writes humorous fantasy under the name Steff Metal, and dark, dystopian fantasy under S. C. Green. Her latest novel, The Sunken, explores an alternative Georgian London where dinosaurs still survive.

Stay up to date with Steff's books by signing up to her newsletter at http://steffmetal.com/subscribe, or like her Facebook page at http://facebook.com/steffmetal.