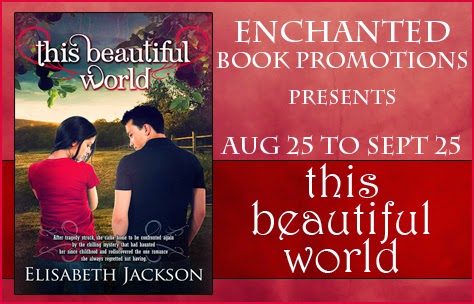 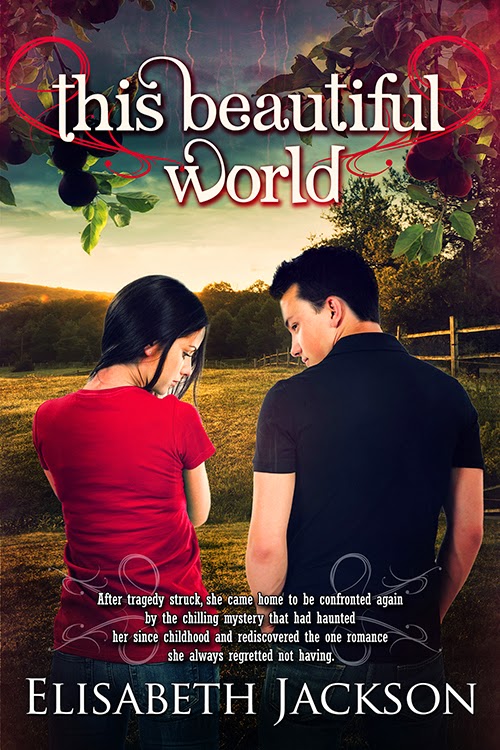 As children, RaeAnne and her sidekick King were held captive after they discovered the body of a boy their age in a crate of apples in their small town’s peculiar orchard. Now RaeAnne is grown and the mother of a troubled young daughter. After her mother is killed in an accident, she travels home to her father with her daughter.

But RaeAnne finds that she is not welcomed by everyone, and frightening incidents start to happen involving her and her family.

As RaeAnne unravels the mysteries of her childhood, including what happened to her older brother, who vanished on the same night RaeAnne and King found terror in the orchard, she reunites with King. The boy she knew has grown up to be very handsome and guarded. But can the two ever be more than old friends who share a terrifying secret?

Elisabeth Jackson loves the outdoors and dogs, rescued dogs in particular. This Beautiful World is her debut novel and blends haunting childhood secrets, romantic themes, second chances and a mystery in a small town setting, with a dash of Gothic elements. When she is not writing small town Romances and Mysteries, she works as a freelance business writer. Her characters are inspired by the rural towns she has visited and lived in. She welcomes readers to connect with her at ejacksonbooks.com and Facebook.com/ejacksbooks.

In 1998, King and I searched through the crates of apples picked earlier in the morning at the Gray orchard to take a few for a snack. We’d made it all the way to the center of the orchard, where the apple crates were set out along the trail for the trucks to collect.

A bird screeched and the lanky apple trees, with branches like a witch’s curved, gnarled fingers, seemed to close in on us, as though we could become forever lost in this crowded world of trees. If the Gray family caught us, would anyone be able to hear our cries for help?

King plucked an especially red apple and tossed it to me.

“Thanks,” I said, catching it in my hand. I wiped the fruit against my shirt until it shone in the summertime light and bit through the tender skin, into the crisp white center, the sweet juice filling my mouth. I glanced up and King was gone.

He laughed, and his tall frame jumped out from behind the line of trees, where apples hung in the sunlight like glittering red jewels.

I dropped my half-eaten apple to the ground as he walked back to me. “Don’t ever do that again,” I said, facing him, the sun warming my arms. “I thought you’d left me here.”

A slender bird appeared like a wisp of dark paper in the pale blue sky, and I watched it glide. King gasped and I turned to look at him.

“What?” I asked. Then I saw what he saw – a smooth, white thing protruding out of one of the crates. I craned my neck for a closer look. It was a limp hand, reaching out to us from below a mass of apples unlike the kind I’d seen other times at the orchard, the just-picked beauties with red, dusty skins. The skins on these apples were peeling away from the browning fruit. There was a sickly sweet smell of cider.

The hand was still attached to an arm somewhere down below. In its appearance, it wasn’t like mine or Mama’s, and not like Daddy’s either. Dark, curly hairs were rooted in Daddy’s knuckles like underwater seagrass. This hand was fresh, like a newborn’s skin.

I touched the skin as fast as running my finger through a candle flame, and the surface was cold, yet soft. The hand, with smooth, blood-stained fingernails, grasped toward us from inside an old crate held together with warped slats punctured by loose nails. I gagged. My next instinct was to run. Run far away.

Behind me, King approached and I whirled around, tried to hold him back. He shrugged past me and edged closer to the waist-high apple crate, looking inside, searching for something more than a hand. He ran his fingers across the Gray Family Orchard stamp on the side.

“Is he way down in there somewhere?” he asked. Standing on his toes, he leaned over the high crate’s rim, reached to touch the inside.

“Don’t touch it,” I said, bringing his arm down, and it bumped against the rim of the crate.

His boyish curiosity got the better of him. “What did it feel like?”