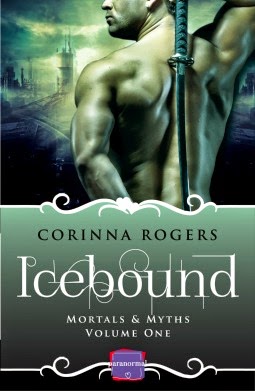 It’s been ten years since Shane Conell sold his soul to the Ice King in order to save the life of the man he loves. Correction, loved.

After ten years, it’s growing difficult to remember love, and hate, and laughter – until a chance appears to get back the only thing his frozen heart still wants…

Drake Young is doing fine. Really. He’s got a good job, nice benefits, and the soulless husk of his old lover only comes by to torment him every so often. However, it only takes the appearance of a creature from the Netherworld wreaking havoc on the decidedly non-magical city streets to drag him out of retirement, forcing him to team up with the one person he can’t bear even to look at!

Now, Drake and Shane must race against the clock to keep their city from being destroyed, even if it means working together. And no matter how difficult it is to catch the creature, it’s a hell of a lot more difficult to resist the urges that ten years haven’t managed to kill.

I'm not really sure what to make of this book. I wanted to like it more than I did. It's certainly not a romance in the traditional sense, as Drake and Shane have already been lovers in the past. There isn't that courtship dance you'd expect in a romance about them meeting and falling in love.

The book has some things I liked and some things I hated. Having sold his soul to save his lover, I felt more drawn to Shane than to Drake as the story went on. Despite being soul-less, Shane was still very much a sympathetic character. You understood why he'd sold his soul, he would have done anything to keep Drake safe. Drake on the other hand came across as judgemental and didn't seem to get why Shane had done that. Perhaps he didn't really know?

The world-building is intriguing, but I could have done with a bit more of an explanation of the creatures and the different realms. We get glimpses, enough to whet the appetite, but not enough to satisfy it. There are flashback scenes to various points in the past, which were jarring and took you out of the main story.

However, this book has one of my pet hates - it is written entirely in present tense. That might work well for shorter works but for a novel it was tough going and if I had known it was written in the present tense, I would never have even started reading it.

The other thing I hated was the gang rape scene near the end - it was overly graphic and horrific and as much as I felt for Shane, I did not want to read that scene. It also seemed in very poor taste, that a few hours after that rape, Drake and Shane then have sex. Really? Shane has just been viciously violated and Drake thinks sex between them would be a good idea? I know people may react to rape in different ways, but Drake didn't even say anything like, do you think this is a good idea after what happened to you? No, they just have sex anyway and what makes it even worse is that Drake says all these humiliating things like how hungry Shane is for cock etc. Not cool at all.

It left a sour taste in my mouth and I won't be reading any more in the series.