Book Spotlight & Giveaway: Burn for Me by Ilona Andrews 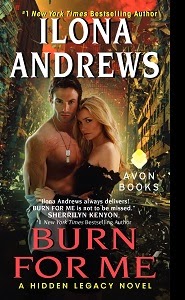 Nevada Baylor is faced with the most challenging case of her detective career-a suicide mission to bring in a suspect in a volatile case. Nevada isn’t sure she has the chops. Her quarry is a Prime, the highest rank of magic user, who can set anyone and anything on fire.

Then she’s kidnapped by Connor “Mad” Rogan-a darkly tempting billionaire with equally devastating powers. Torn between wanting to run or surrender to their overwhelming attraction, Nevada must join forces with Rogan to stay alive.

Rogan’s after the same target, so he needs Nevada. But she’s getting under his skin, making him care about someone other than himself for a change. And, as Rogan has learned, love can be as perilous as death, especially in the magic world.

In 1863, in a world much like our own, European scientists discovered Osiris serum, a concoction which brought out one’s magic talents. These talents were many and varied. Some people gained ability to command animals, some learned to sense water from miles away, and others suddenly realized they could kill their enemies by generating a burst of lightning between their hands.

The serum spread through the world. It was given to soldiers in hopes of making the military forces more deadly. It was obtained by members of fading aristocracy, desperate to hold on to power. It was bought by the rich, who desired to get richer. Eventually the world realized the consequences of awakening godlike powers in ordinary people. The serum was locked away, but it was too late. The magic talents passed on from parents to their children and changed the course of human history forever. The future of entire nations changed in the span of a few short decades. Those who previously married for status, money, and power now married for magic, because strong magic would give them everything.

Now, a century and a half later, families with strong hereditary magic have evolved into dynasties. These families—Houses, as they call themselves—own corporations, have their own territories within the cities, and influence politics. They employ private armies, they feud with each other, and their disputes are deadly. It is a world where the more magic you have, the more powerful, the wealthier, and the more prominent you are. Some magic talents are destructive. Some are subtle. But no magic user should be taken lightly.

“Ican’t let you do this. I won’t. Kelly, the man is insane.” Kelly Waller reached over and touched her husband’s hand, looking for reassurance. He took his hand off the wheel and squeezed her fingers. Strange how intimate a touch can be, she thought. That touch, fueled by twenty years of love, had served as her rock in the nightmarish storm of the past forty-eight hours. Without it, she would have been screaming.

“You told me yourself he hates his family.”

Tom stared straight ahead, glassy eyed, guiding the car up the curve of the driveway. Old Texas oaks spread their wide canopies over the grassy lawn, sprayed with drops of yellow dandelions and pink buttercups. Connor wasn’t taking care of the grounds. His father would’ve had the weeds poisoned . . .

The driveway brought them to a tall stucco wall. She raked her memory. Sixteen years was a long time, but she was sure the wall hadn’t been there before.

A wrought-iron gate blocked the arched entrance. This was it. No turning back. If Connor decided he wanted her dead, her magic, what little of it there was, wouldn’t be enough to stop him.

Connor was the culmination of three generations of careful marriages aimed at bolstering the family’s magic and connections. He was supposed to have been a worthy successor to the fortune of House Rogan. Much like her, he hadn’t turned out the way his parents had planned.

Tom parked the car. “You don’t have to do this.”

“Yes, I do.” The dread that hung over her mugged Kelly, setting off a wave of overwhelming anxiety. Her hands shook. She swallowed, trying to clear her throat. “This is the only way.”

“At least let me come with you.”

“No. He knows me. He might see you as a threat.” She swallowed again, but the clump in her throat refused to disappear. She never knew if Connor could read people’s thoughts, but he was always aware of emotions. She had no doubt they were being watched and probably listened to. “Tom, I don’t think anything bad will happen. If some- thing does, if I don’t come out, I want you to drive away. I want you to go home to the kids. There is a blue folder in the cabinet over the small desk, the one in the kitchen. On the second shelf. Our life insurance policies are in there, and the will . . .”

Tom started the engine. “That’s it. We’re going home. We’ll deal with it ourselves.”

She jerked the car door open, jumped out, and hurried to the gate, her heels clicking on the pavement.

She forced herself to touch the iron gates. “This is Kelly. Connor, please let me in.”

The iron gate slid open. Kelly raised her head and stepped inside. The gate glided shut behind her. She walked through the arch and up the stone path that wove its way through the picturesque copse of oaks, redbuds, and laurels. The path turned, and she stopped, frozen.

“Ilona Andrews” is the pseudonym for a husband-and-wife writing team. Ilona is a native-born Russian and Gordon is a former communications sergeant in the U.S. Army.

Contrary to popular belief, Gordon was never an intelligence officer with a license to kill, and Ilona was never the mysterious Russian spy who seduced him.

They met in college, in English Composition 101, where Ilona got a better grade. (Gordon is still sore about that.) They have co-authored two New York Times and USA Today bestselling series, the urban fantasy of Kate Daniels and the romantic urban fantasy of The Edge and are working on the next volumes for both.

They live in Texas with their two children and many dogs and cats.