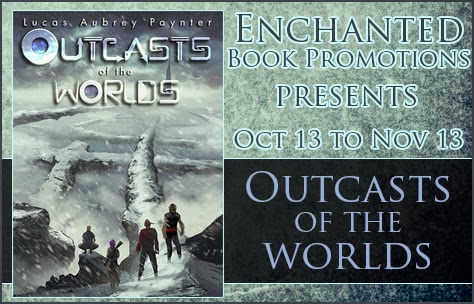 Beyond the remnants of Earth lie many worlds, connected by pathways forgotten and invisible. They were left by the gods and have been found by Flynn.

A confidence man. A liar. A monster. Flynn has seen himself for what he really is and has resolved to pay for everything. Even if it means spending the rest of his days locked in Civilis, a tower prison for society's unwanted - "half-humans" gifted by the fallout of nuclear holocaust centuries past.

Jean, a prisoner in the neighboring cell, has different ideas and despite himself, Flynn finds himself joining her daring escape. After rescuing her friend Mack, the three flee Civilis as Flynn pieces together the hours before his capture and finds himself drawn to an abandoned facility where a rift to another world opens at his nearing.

Together they will venture farther beyond the stars than humanity ever imagined, find others like them that will never belong, and tangle with forces both ancient and immortal. They stand alone, hated and scorned - and the last hope of making things right in a cosmos gone terribly wrong.

Flynn looked up at her, his inhuman eyes sending a shiver through her that cut straight down her spine. There was an otherness to him that made her afraid, more terrifying than the savage beastmen that Raddius Tehmbao had described; she began to believe that the damage he could do was more than her frail body could take, if she wasn’t careful.

It’s a rifle. A weapon.” She kept the surprise from raising her eyes. He looked down at the pieces on the table. “I put it in a girl’s hands and she’s dead now.”

A chance might have come sooner than she realized. She shook her head incredulously. “You cannot really have me think that dull thing—”

Flynn gave a sorry smile, tossing the rag aside. He began snapping pieces together, leaving a large canister with tiny lights aside. Standing up, he held it in what she guessed was the proper way.

Whatever this tool, it was more than any beastman could forge, more than even the most expert metalworkers in Cordom could make. Pieces, perhaps, but the whole of it? Reaching out, Chari took it and held it the way he had.

Her hands seemed to fall in place, supporting the length of the rifle with one hand as a finger of the other landed on a trigger like that of a crossbow. As she grasped its function, she let it drift lazily toward Flynn, inching near where she hoped his heart beat, if indeed he even had one.

“You can do a lot of damage with that,” he told her, either not noticing or not caring.

Her trigger finger itched. She wanted to pull it, to understand how a tool like this might end him. Saryu doctrines had specific claims against the killing of innocents, but crusaders and inquisitors alike found ready exceptions to these tenants, and Chariska Jerhas was daughter to both. Off her finger slid, before it could do the promised harm. If this tool for killing wasn’t so far beyond her, he wouldn’t so carelessly place it in her hands.

Lucas Aubrey Paynter holds a Creative Writing degree from California State University Northridge—which looks really good when one talks about how they want to write for a living. A fan of engaging storytelling in any medium,  he spent years developing the worlds, characters and conflicts that Flynn and his company encounter, before settling at his desk and writing Outcasts of the Worlds, the first part of a much larger tale to come.

Currently residing with his wife in Burbank, California, Lucas enjoys reading in a variety of formats, potentially overanalyzing character motivations and arcs, and the occasional good, stiff drink.