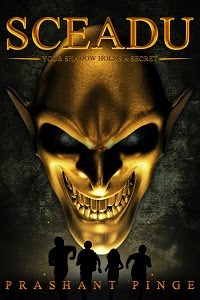 Nine year old Matilda ends up with a century old book through a series of strange coincidences. And disappears. Her brother and cousins are forced to suspend their hostilities and pursue her to Sceadu, a land inside the human shadow. Once there, the reluctant visitors find themselves chased by the vicious Hefigans, creatures of Sceadu. However, everything changes with the revelation of an ancient prophecy that foretells the doom of the world they left behind.

With the stakes suddenly raised, the children must now navigate the dangerous terrain, overcome grave challenges, and unlock the secrets of the shadow. But can they do it in time to thwart the plans of the treacherous Hefigans? Or will they succumb to the guile of a ruthless enemy who is equally determined to destroy mankind?

Sceadu is a fast-paced adventure which blurs the boundary between the physical and the psychological, the real and the mythical.

Matilda sat at her old wooden desk, staring into the thick yellowed pages of a book under a dull moth ridden beam cast by the night lamp. But every time she blinked, it seemed as if the words had played a round of musical chairs. And the moths, fluttering through the words at times and hovering over them at others, did not make things any easier.

Matilda was about to turn the page when there was a tug at her feet. It was a very gentle one, almost imperceptible. Surprised, she glanced down, but there was nothing. Perhaps it’s just my imagination, she thought. She was about to shake her thick dark brown curls out of her face when she felt it again. 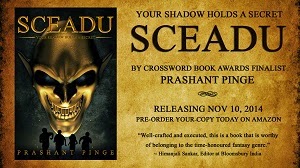 Matilda pushed her head down and looked into the dark void with furrowed brow. Her skinny legs stared back. But before she could decide on whether she had actually felt anything, there was another tug, an unmistakable one this time. And another one. The truth suddenly dawned upon Matilda. It was her shadow, trying to drag her into itself.

Matilda jerked back the chair, kicking hard at her shadow. But it snapped back, pulling at her even more viciously. She stomped upon it repeatedly. But the dark grey shape began jabbing at her feet and ankles. Matilda pushed herself up and made a frantic attempt to run. But her legs refused to move, and she almost toppled forward.


Prashant Pinge was born and brought up in the picturesque neighbourhood of Shivaji Park in the bustling city of Mumbai in India.

A quiet and diligent student throughout his schooling and college years, Prashant proceeded to pursue electrical engineering at Purdue University in the United States. Over the next decade, he accumulated three more degrees, a master of science in management from Lancaster University, a post graduate program in management from Indian School of Business, and a post MBA master in international management from Thunderbird School of Global Management.

Apart from enjoying the company of books, Prashant had always had an imaginative bent of mind. But writing only happened in the fall of 2003, when a remarkably intriguing dream interrupted an uncharacteristically deep spell of slumber, compelling him to stagger to his desk and pen down the idea. That book is still a few years away from being written. Prashant, however, continues to work from his cauldron of creativity and churn out critically acclaimed works of fiction.

n addition to his literary pursuits, Prashant is Managing Partner in his marketing and branding firm, Media Panther. In his spare time, Prashant enjoys collecting old coins, reading fiction, travelling to exotic destinations, watching movies, and listening to music. He recently wrote and produced a short film titled Freedom of Expression. Prashant is also keenly interested in the subjects of psychology, mythology and ancient history.

Prashant lives with his wife and son in Mumbai.