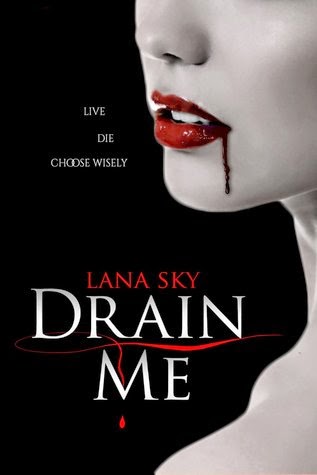 When diagnosed with a fatal illness at the age of twenty six, Eleanor Gray is resigned to her fate—at least until the enigmatic Dublin Helos appears and makes her an offer she knows she should refuse:

With a decision as harmless as checking the wrong box on a mysterious questionnaire, Ellie is plunged into a dangerous world where souls are sold to the highest bidder and pleasure is fueled by pain.

The rules of this new life are simple: submit everything—mind, body and soul. But the further Ellie falls under Dublin’s control, the more she comes to realize that it’s not just her sanity at stake, but her heart and a whole lot of blood too.

The fact that he knew my name didn’t alarm me.

My family owned half the city, including a good portion of this very hospital. Considering that my
sister’s escapades were constant fodder for the tabloids, I would have been more insulted if he didn’t know who I was.

But once again …it was that look in his eyes. It chilled me right down to the bone; I know you, Eleanor Gray, it said. Way more than just a face from the Society Pages.

Before I could choke out a reply, he smiled—for real this time—and my poor brain struggled to find the right words to describe it. Dazzling. Magnificent ...

The flash of pearly white teeth nearly knocked me senseless. I lost my grip on the handkerchief for a split second, sparking the taste of copper over my tongue.

“Word travels fast around here,” he said, voice traveling down my spine.

I felt my nose wrinkle as I frowned. Apparently news of my terminal illness had spread before I’d even left the damn hospital. How long before my picture ended up splattered over the front of some tabloid beneath the headline, Heiress given weeks to live?

I didn’t answer. Instead, I willed my nose to stop bleeding, though I had a feeling that I was quickly becoming in danger of needing transfusion number four.

I felt so dizzy all of a sudden. As if, at any moment, I could pass out. Faint.

The question threw me off and had me turning to face him before I could help it. Wordlessly, he inclined his head and my eyes automatically followed.

The hall we were in opened onto a causeway, where patients and visitors alike wandered the pristine floor.

The sight reminded me of a hotel—albeit minus the IV poles some people sported instead of suitcases. The air was the same: that busy, ‘places to go, people to see, get the hell out of my way’ vibe that made everyone seem closed off, further away.

Without meaning to, I found my gaze settling over a young girl who had her head wrapped in a polka dot headscarf. Beside her, a man I guessed to be her father pushed an IV pole that rattled over the floor.

She was almost as pale as I was, with dark, bruise-like circles underneath her eyes—but that wasn’t what stood out to me the most.

She was smiling. Walking, talking and …smiling. Despite the obvious physical signs, if you went off that expression alone, you would have never guessed she was sick at all. My gaze remained glued to her, even as the mysterious doctor spoke up again.

“Mortality,” he said grimly. “It’s the most precious commodity in the world, don’t you agree?”

I nodded. I may have not been that invested in my own life, but I could read the fervent desire on all the other faces—from the new mother carrying her infant in a car seat, to the elderly man clutching a newspaper to his chest.

The lust to live was always the same.

“There are some who would do anything for another chance at life, for more time.”

He spoke so matter-of-factly that it wasn’t until my mind processed what he was really saying that his morbid tone struck me like a blow.

“I-I don’t know what you’re talking about.” I sounded like I was under water.  My nose was still dripping. Even the pressure of my hand wasn’t enough to staunch the blood flow.

“You wouldn’t,” Mr. Gray Eyes said with a shrug. “Immortality doesn’t interest you, does it, Eleanor?”

Alarm raced down my spine—no longer was I convinced that this was just a random chat with a stranger. It was all in his tone.

“I have to go.”  I clutched the now bloody handkerchief and tried to stand. My legs felt as flaccid as limp noodles. Sweat poured down the back of my neck, and the erratic beat of my heart quickened and then faltered. Thump, thump, th-ump.

“You’re not afraid of death,” the man—though I was now seriously doubting that he was a doctor—continued. “You welcome it; or so you tell yourself. But, I’m here to offer you a choice—”

I was through humoring him. Without bothering to be polite, I attempted to stagger in the direction of the activity, grasping onto anything to steady me. My hands were slippery and my once-burgundy peacoat was now soaked scarlet.

“Mortality can be a hindrance of sorts.”

The man was still talking, only I had no idea just what he was getting at. More importantly, why hadn’t he gotten a doctor or flagged down a nurse? I clung to the wall and scanned the crowd of blurring faces, desperate to catch sight of another white lab coat.

It took all my strength just to get the words out. And he only ignored me.

“I’m here to offer you a choice, Eleanor: accept your impending death, or …something else.”

Lana Sky is a reclusive writer in the United States who spends most of her time daydreaming about complex male characters and legless cats. She writes mostly paranormal romance, in between watching reruns of Ab Fab and drinking iced tea. Only iced tea.