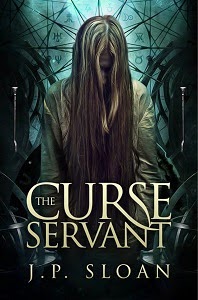 The one person standing between Hell… and an innocent girl… is a man without a soul.

A regular life isn’t in the cards for Dorian Lake, but with his charm-crafting business invigorated, and the prospect of a serious relationship within his grasp, life is closer to normal than Dorian could ever expect. In the heat of the Baltimore mayoral campaign, Dorian has managed to balance his arrangements with Deputy Mayor Julian Bright with his search to find his lost soul. Dorian soon learns of a Netherworker, the head of a dangerous West Coast cabal, who might be able to find and return his soul. The price? Just one curse.

Sounds easy… but nothing ever is for Dorian. A dark presence arrives in the city, hell-bent on finding Dorian’s soul first. Innocents are caught in the crossfire, and Dorian finds it harder to keep his commitments to Bright. When the fight gets personal, and the entity hits too close to home, Dorian must rely on those he trusts the least to save the ones he loves. As he tests the limits of his hermetic skills to defeat this new enemy, will Dorian lose his one chance to avoid damnation?

I knew this wasn't going to be the typical meeting with Julian Bright when, instead of the usual political organ-grinders at the campaign headquarters, I found a soccer mom duct taped to a chair, foaming at the mouth. Her grunting and growling echoed off the bare sheetrock walls of Julian's office, vacant except for the three of us.

I peeked through the blinds covering the locked storefront to make sure none of volunteers were back from the morning rounds. Satisfied we were alone, I turned to Julian.

He waved his arm at the woman in a lazy circle. "So, this is why I called."

"Her name is Amy Mancuso. You know her?"

I shook my head.

"She's a volunteer. Her team was working Cold Spring by Loyola when she started swearing and spitting at the residents. By the time her team captain called me, she'd kicked someone's dog. Terrier, I think. Or one of those purse dogs."

I winced. "Remind me not to hand out yard signs for you. Jesus."

"It's not like we do background checks on volunteers. I figured she probably missed some meds or something."

"But you called me instead of the paramedics."

Amy's grunting halted as she straightened in her chair. Her head swiveled slowly in my direction, and her eyes sent the creeping chills up my neck.

With a nerve-rattling tone she growled, "Is that Dorian Lake I smell?"

I'd never enjoyed the sound of my own name less.

Julian turned a shoulder to me and whispered, "That's why."

I slowly approached Amy, pulling my pendulum from my jacket pocket in a slow, non-threatening motion. Last thing I needed at that moment was to send a crazy person into a panic. I assumed she was crazy. My pendulum would determine whether she was unnaturally energized or the usual cat-shaving flavor of lunatic.

Her eyes were dilated; her mouth twisted into the most unsettling smile one could imagine on the face of an otherwise average woman.

Okay, this was probably a legitimate problem.

I dangled the pendulum in front of Amy. The little nugget of copper spun from the end of its chain in a perfectly Newtonian fashion. Nothing pulled it contrary to the laws of Nature. I couldn't even feel a tug on the chain.

She continued, "Lost his soul, he lost his soul. Dropped it down a rabbit hole."

"I suppose you think you're being clever?"

"Is he doomed or is he dead? Will he damn your soul instead?"

This conversation had lost all of its charm.

She sucked in a huge gulp of air and craned her neck at a painful angle toward the ceiling. A sick squealing noise leaked from her lips as her arms trembled. When she finally released her breath and sank back down into her chair, she simply chuckled.

I leaned in as close as I dared and whispered, "If you think I'm afraid of you, then you need to know something. I'm not impressed."

"Did someone send you, or is this just a courtesy call?"

She smirked. "We're going to enjoy this."

I was knitting together a clever response when a loud rip of tape crackled through the room. Her hand slammed up underneath my jaw, fingers clamping around my throat. My head filled with blood, and I tried to cough through the gag reflex. The harder I beat on her hand to let go, the wider that creepy smile got. J.P. Sloan is a speculative fiction author ... primarily of urban fantasy, horror and several shades between. His writing explores the strangeness in that which is familiar, at times stretching the limits of the human experience, or only hinting at the monsters lurking under your bed.

A Louisiana native, Sloan relocated to the vineyards and cow pastures of Central Maryland after Hurricane Katrina, where he lives with his wife and son. During the day he commutes to the city of Baltimore, a setting which inspires much of his writing.

In his spare time, Sloan enjoys wine-making and homebrewing, and is a certified beer judge.

5 Digital copies of The Curse Merchant, Book 1 of the Dark Choir series