Book Spotlight: Help Me Move On by Angie Hemmings 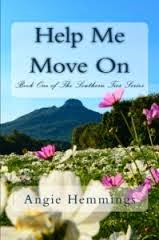 Ally Dunn is a small town girl with big dreams planning a wedding that would never happen. Ally’s life revolved around being Eric’s wife…until she watched his best friend Isaiah step off that plane, his arm in a sling and Eric's casket behind him. Her grief consumed her, their last conversation not one filled with love but an argument over her favorite flower. He knew her favorite flower, he was just busy…fighting for his country. Isaiah made a promise to Eric, he would keep Ally safe even if that meant saving her from herself. Isaiah takes Ally away when her grief becomes too much but their return brings about something she never expected.

When Ally meets Colton Walker she knows her life will never be the same. She never planned to move on from Eric, the mere idea of moving on would send her into a panic. How do you move on from the man you loved, the man who shared your dreams, who made your heart feel whole? But Colton doesn’t push her, he doesn’t pressure her, he gives her everything she ever needed and he does it effortlessly.

Falling in love with Colton was like taking her next breath; she didn’t have to think about because it came naturally…only a cloud hangs over Ally. Isaiah trains her in Krav Maga, Eric trained her in gunfire. Colton sees all of this, asking the one question she can’t answer, why? Why would a woman who lives in such a small town need to know such aggressive self-defense? Isaiah vows to keep her safe, going so far as to track her every move…but why?

Surviving Eric’s death almost killed Ally, the hole in her heart never truly healed until Colton. Falling in love with Colton was easy, fighting for her life when everything she thought she knew was wrong…that was a completely different story.

Angie Hemmings is a self-proclaimed romance addict.  Her love for romance began at an early age but after years of reading romance novels she found herself wanting more which led to her first novel.  She's originally from Mount Airy, a small town in the foothills of the Blue Ridge Mountains and she loves the art behind creating a new story.  Getting lost in the romance, the struggle between her characters is what makes Angie Hemmings continue her work and writing is what she loves.