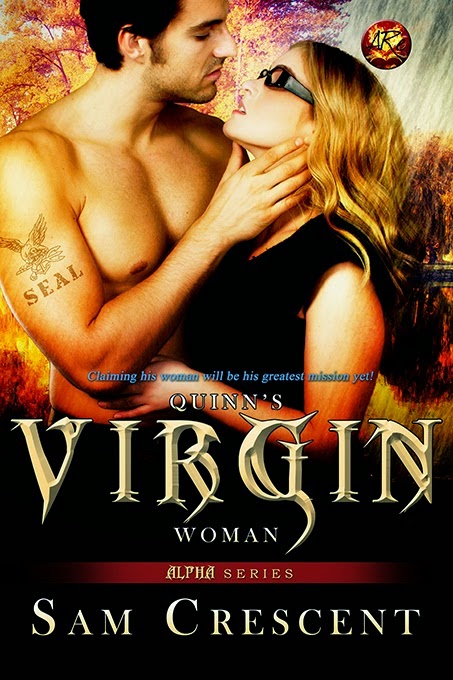 Claiming his woman will be his greatest mission yet!

After completing his last mission Quinn Powell is leaving the Navy SEALs behind to tackle what just might be his greatest challenge yet, claiming Kaley Woods. The woman is both his sister's best friend and Quinn’s greatest weakness, two things that would send any sane man running in the opposite direction. But then Quinn’s not the type to run.

When Kaley heard that Quinn was coming home, she wondered if he’d still affect her in the same way. Now that he’s living in her apartment, she has her answer. Everywhere she turns, he’s there—strong and intent—his effect on her more powerful than ever. She knows he’s returned in search of something. What she doesn’t realize is he’s come determined to make Kaley his…in every way possible.

Quinn Powell stared down at the picture his sister, Dorothy had sent him. It was of her birthday party, which he’d not been able to attend, and beside her stood Kaley Woods, her best friend. His sister had celebrated her twenty-first birthday three years ago and this picture had been taken then. Dorothy had always been a force to reckon with. The moment she met Kaley in nursery school they’d been best friends. No one could separate the two even if they wanted to. Their parents were overjoyed by their strong friendship as neither would do anything to risk the other. Kaley wouldn’t go out to any wild parties, which meant Dorothy found other ways to occupy her time. Dorothy wouldn’t sit in the library all day reading books, so Kaley found ways to be with her friend. They were like chalk and cheese, yet the best of friends. Watching them grow up had been fun. Quinn was a good ten years older than the girls and had been expected to get them out of trouble even though they were rarely in trouble. Kaley rarely spoke more than a few words at a time to him and he’d done anything to try to.

Over the years he’d noticed that about Kaley. She was a shy girl, almost withdrawn, apart from when she was with Dorothy. His sister brought Kaley out of her shell and forced her to live in the real world rather than her world of books.

He ran his thumb over her picture, falling for her smile like he’d fallen for every single part of her over the last few years. She was a beautiful woman yet hid behind large clothing and glasses she didn’t need. He’d seen her slide them up into her hair several times as she moved around the house. Whenever he entered a room, the glasses would conveniently fall down onto her face, hiding her away. He didn’t know what she was hiding away only that it would no longer work. He wanted her and had left her to live her life for the past six years without any interference from him. When she’d turned eighteen, Quinn had had every intention of getting to know her better, to seduce her. Dorothy asked him to let Kaley live her life, to go to college without the fear of an older, scarier boyfriend. His sister cared about him but she also cared about her friend. Quinn respected Dorothy enough to stay well clear. Dorothy only asked for him to give Kaley a chance to live her life through college. She’d not said anything about the future. He’d given his sister Kaley’s college years, and the last time he spoke to her, he’d made his intentions known. He was coming back home to make Kaley his. His sister no longer demanded he stay away and had in fact started to send him pictures.

He was a Navy Seal and had the pleasure of working with a fine group of men who all worked for special top-secret operations that risked his life on a daily basis. He’d just signed the papers for his final mission. He was getting out and, at the age of thirty-five, he was going to finally marry his woman.

Handing everything over, he grabbed his bag and looked toward his friend, Dale.

“Are you sure about this? There’s nothing more exciting out there.”

Quinn shook Dale’s hand. “I don’t need excitement anymore. I’ve got everything I wanted out of this life. It’s time for me to move on.”

“The guys are all going to miss you.”

“I may be out but that doesn’t mean you can’t come and visit me. I’ll be expecting you.” He withdrew his hand, offering a smile. “Come visit me and I’ll buy you all a beer.”

“Will do. The men are going to want to see the woman that has you leaving our asses.” Dale tucked the form under his arm. “How are you getting home?”

“Plane, taxi, Dorothy has refused to come and get me. She’s at the apartment where I’ll be staying.”

“Okay. Your sister is waiting to give you a long talk, right?”

“You know her well. She’ll be ready to have my ass if I in any way ruin her friendship with Kaley.”

“Ah, the mystery woman has a name.”

Shaking his head, Quinn turned and headed out into the sunshine. He loved the summer a hell of a lot more than he did the winter. Everything always looked brighter to him. Climbing in the back of the guys’ car, he laughed as they talked nonstop about his leaving. They were all good men and he’d miss them.

Quinn stood in the airport and he took out the picture his sister had sent last. It had been taken four months ago at Kaley’s twenty-fourth birthday. His sister knew about his feelings for her friend and had expressed her concern, but she hadn’t stopped sending pictures of Kaley.

His woman smiled back at the camera. In front of her was a large, chocolate-frosted cake. For the first time in a picture the glasses were not present and he was able to see her dark brown eyes. She smiled and it lit up the whole of her face, making his chest tighten and his cock harden unbearably. Her hair was unbound and curled around her shoulders. The dress she wore showed a great deal of cleavage, more daring than anything he’d seen her in as the hem ended before her knee. Kaley was pressing the knife into the cake. She practically sparkled with joy.

Quinn had already set the wheels in motion for him to be out of the Seals. This picture had only confirmed what he would do. It would only be a matter of time before another man saw what he did and fought past her boundaries to get to the woman within. He saw the sensuality within her. The need in her eyes to be taken, to be loved, shone brightly back at him. There was so much need inside her he was surprised Dorothy hadn’t pushed one of her male friends onto Kaley. His sister hadn’t, and so, Quinn was finally ready to make Kaley his. He’d be the one to unlock the passion inside her. He alone would reap the rewards, and when it was all over, he’d be the one she fell in love with.

All he needed to do was persevere. It wasn’t hard. He’d been a Navy Seal; seducing a woman would be a walk in the park.