It was only a couple years ago that I was a hopeful author with a rough draft of the manuscript for my book, Living Dead Girl. I’d already been through the process of submitting to agents and publishers with two other novels--one landed an agent; neither ever saw the light of day. I wasn’t looking forward to doing it again. Researching agents and tailoring query packages takes a lot of time. Then there’s the waiting...lots and lots of waiting. It’s a slow, frustrating process.

I considered self-publishing, but lacked the funds for a professional editor and cover designer. Instead, I joined a critique site and put Living Dead Girl through a pretty intense workshop. I met many fantastic and supportive people, many of whom I still keep in touch with today. Then I began the query process, starting with agents. It landed a few requests for more material, but ultimately, led nowhere. Finally I decided to start targeting small publishers directly.

It took roughly six months of querying before I signed the contract to publish Living Dead Girl. I was ecstatic--this was it, the thing I’d wanted for so long. I’d finally made it. But the reality was, I’d cleared one major obstacle only to find a mountain standing before me.

Now, a little over a year later, with two full-length books out, as well as two short stories in different anthologies, I’ve started to climb that mountain. It’s one thing to read about it and hear stories from other authors. Quite another when you’re experiencing it yourself.

Getting noticed isn’t easy. As an unpublished author, I truly had no idea how difficult this part of the process would be. Part of it was unrealistic expectations. Part of it was just not knowing what it would be like, because I had nothing to compare it to. Once release day passed, though, it hit: my book was just one out millions readers could choose.  How was I supposed to separate my work from everyone else’s? It’s probably one of the most sobering realities for any new author.

Obviously, gaining readers and building an audience is much more of a marathon than a sprint for the average newbie author. I’m okay with that because I enjoy the process and the challenges that go along with it. If I wasn’t, I would’ve jumped ship long ago. That said, there are times it can wear on you. It’s tiring work. By the time I’ve returned home from my day job and taken care of dinner, I often don’t feel like doing much with my social media accounts. I’ve taken the attitude that I’ll do what I can when I can, and that’s okay.

Writing is definitely not a money making endeavor for me yet. The sad truth is, I’ve probably spent more than I’ve made with any of my published books. Blog tours, advertising, etc. And between giveaways and review copies, I’ve probably gifted almost as many books as I’ve sold. I don’t mind. I figure it’s cumulative. Every review, every little bit of promotion is another place my books show up. And believe me, I’m extremely grateful for each and every helping hand I’ve received along the way.

Thankfully I’ve met some fantastic people. Other authors have become a huge support network, and to any aspiring author, I’d have to say this is invaluable. After all, you can accomplish much more with a team than with a single person.

I feel like I’m still learning, and often have to remind myself that it’s just been a little over a year since I began this journey. I’m just trying to figure out the best way to help my books succeed, and I’ve got enough stories in me that I plan to keep working at it. I have no idea what the future will hold, but I plan to keep on writing along the way. 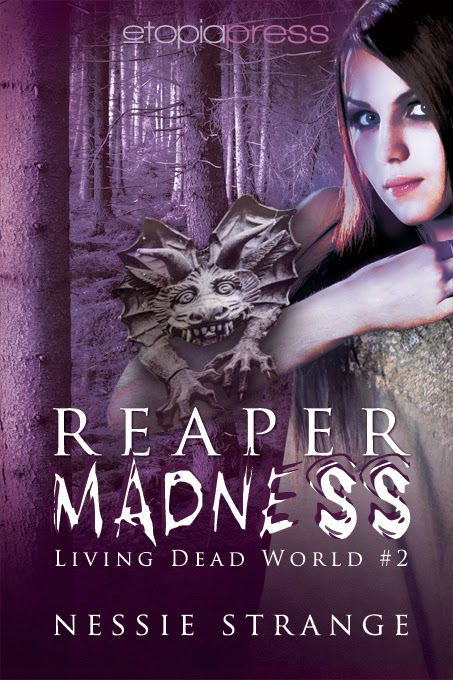 This isn’t the afterlife she expected...

Jen MacLellan can’t get the hang of being a reaper. She’s been separated from Jack, the man she loves, and is stuck with an annoying telepathic link to her ill-tempered mentor, Sam. Now Death is breathing down her neck, promising to remove that annoying link if she gives him what he wants. But when reapers begin to disappear back on earth, leaving behind walking, talking dead people, Jen and Sam are thrust into a dangerous mission to recapture the souls, and a passionate physical relationship that complicates everything.

Jack Norris has no memory prior to waking up on the half-demon Nulcifer’s couch six months earlier. As he begins to investigate his past, he discovers a string of past lives tied together by a beautiful, mysterious brunette. Who is she? And why does finding her seem like a life or death proposition?

When Sam falls victim to fate during a routine visit to earth, Jen’s devastated. Desperate to get him back, she runs smack into the man she never thought she’d see again—Jack. She tries to keep her distance, but there’s no time to be awkward if they want to save Sam. When sinister plots are revealed, and betrayals threaten everything, she’s forced to make some tough choices—and learns that life is just as difficult when you’re dead.

Nessie is a Massachusetts native and mother of two who has dabbled in everything from abstract painting to freelance sports reporting. She also loves a good story, whether it’s reading or writing one.