Most people know me as an artist, so it came as a surprise to all my friends, and even my own mother that I had written an epic sci-fi/fantasy novel.  The Creator’s Eye has been nearly thirty years in the making, and a very well kept secret from a guy with a rotten record of keeping his lips zipped.

The first inkling of The Creator’s Eye began when I was only six years old.  I was engrossed by video games, and my friends and I wanted to make our own.  We drew them out on paper and using a fair bit of imagination had each other play them.  However, when I went home, I kept thinking about them.  In fact, I wandered through my imaginary archipelago almost every night before I went to sleep for the last twenty-eight years.  Of course, the adventures of Michael and his companions were about as complex as you might expect them to be from a six year old’s He-Man and Transformers addled brain, but by the time I was twelve, all of the major plot points were there.  There are even still a few scenes inspired by movies I loved as a kid that survived into the final draft.  The black dogs in Chapter I partly came from Willow.  The scene in Chapter III when Michael and Maya jump off the roof, well, I was rather taken with Disney’s Robin Hood escaping the burning castle by leaping into the moat.

At twelve years old, I still envisioned The Creator’s Eye as a video game.  I wanted my audience to be able to control and interact with my characters, and I had some pretty advanced ideas for the era.  Being a rather precocious kid and having a mom who was very supportive of my creativity, I wound up having a meeting with a local video game company that wanted to hear my ideas.  Looking back on it, they were probably using me for market research, but it made me storyboard out an early draft for the presentation.  However, sitting in the office of that Santa Monica high-rise also made me realize that I wanted to be a kid for a while longer, so I shoved the story back into my brain for several more years.

It was in my twenties that I realized that I didn’t want it to be a video game (although it still bares the fast-pace of one).  It needed to be a book, and from there could be transformed into anything else I needed.  Also, my old ideas about video games were no longer so ahead of their time.  I took a few stabs at writing my story as a novel, but they were awful.  Parakeets would have squawked in protest if their cages were lined with my book.  It wasn’t until I read the Windup Girl by Paolo Bacigalupi that I had an epiphany that The Creator’s Eye had to be written from multiple points of view.

I wish I could say that the story simply flowed out of me from that point, but I have learned from many years of painting, that no matter how clearly I picture something in my head, it doesn’t always come out how I expected it.  Even though I have imagined Michael, Maya, Sefu, and the rest for decades, I was often stymied when I put pen to paper.   Some parts I had to rewrite and mull over for weeks.  For instance, the emotional complexity and motivations of my characters was something that developed as I wrote them.  I often didn’t know what they would say about a situation until they were confronted by it.

Completing Mover of Fate, the first book in The Creator’s Eye series was one of the most thrilling moments in my life and I am so excited to finally be able to share it.  I just finished editing Part II and plan to release it this Fall, but there is much more to come. 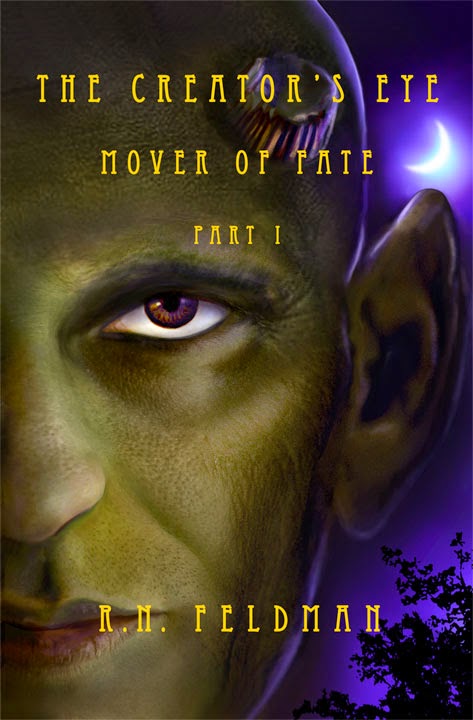 On a hidden archipelago, people known as Movers manipulate matter with their minds while strange Folds in space transform the landscape into wondrous and often deadly anomalies.

When a young Mover named Michael Edwards discovers that he is descended from a long line of beings who can not only Move matter, but actually Create it, he finds himself at the center of a cosmic struggle for power.

Manipulated by friends, family, and an ominous prophecy, he allies himself with a host of strange creatures and characters as he fights to become Mover of his own destiny.

Mover of Fate is the first novel in The Creator’s Eye series by author and artist R.N. Feldman.  Feldman lives and works in Los Angeles, CA where he teaches at Otis College of Art and Design and spends as much time hiking through the local mountains as he can.  Art, metaphysics, useless scientific trivia, and extensive backpacking treks throughout the world have all been major influences in his work.

You can also see his latest paintings on www.RoniFeldmanFineArt.com