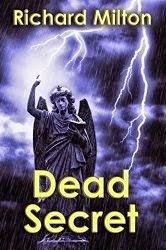 "It was obvious from the day he was born that the Gabriel boy took after his mother in every way. He would be a marked man from birth to death . . ."

Investigative journalist Tony Gabriel inherits a bizarre mystery when he is left the research papers and books of a long-dead Cambridge historian - and a human skull. With no clue to the meaning of this mysterious legacy, Tony puts his years as a reporter to use to investigate who he really is - and is stunned by what he uncovers.

"Suddenly, all the rules of his life seemed to have been broken at once."

Tony's investigations lead him to The Chadwick Foundation - a wealthy and secretive institution whose beliefs in the paranormal both repel and attract him. Are they just rich, powerful people playing an elaborate game, or have they truly gained paranormal powers to penetrate the mystery of the future?

Eve Canning is the keeper of The Foundation's secrets, a powerful and enigmatic woman whose regal beauty turns Tony’s search for the truth into a very personal quest - and his life and beliefs upside down.

Dr. Tony Gabriel is a science writer for a magazine called Insight and most of the time he works on exposes of fraudulent cases of psychics, mediums and fortune-tellers. As a scientist, Tony doesn't believe there is any evidence to support paranormal activity.

After his mother’s death, however, Tony soon comes to doubt that. For there are people out there who seem to know things about him, that even Tony doesn't know. How do they know all these things? Is any of it real, or is Tony just being led up the garden path?

His mother was involved in something called the Chadwick Foundation and after her death, Tony discovers all these papers and something even stranger: a human skull. What was his mother involved in? And why didn't he know any of it before?

The book is well written and keeps up the pace. The action takes place in three time lines, the present day, 1700s France and after World War II and they all blended together well. Tony is a likeable and engaging character and the reader feels they are on the quest with Tony as he tries to figure everything out.

We have everything from palm-reading, I Ching, physiognomy, numerology and people who will pay millions to find out if any of them are true, including governments and the rich elite. But Tony's investigations haven't gone unnoticed and someone doesn't want him to find the truth, someone prepared to kill to keep their secrets.

Eve was a mysterious Femme Fatale, but I just didn't feel any chemistry between her and Tony at all, but I can't put my finger on why. They had sex, but they may as well have been sitting down to tea and eating sandwiches. I just didn't feel their attraction to each other at all.

I enjoyed the book, it was an interesting tale with lots of twists and turns that would keep any mystery fan happy, but I'm afraid the ending let it down.

The rest of the book was so exciting, leading up to something and then with the ending - it just sort of ambled along and finished. But it didn't feel finished. I was surprised when I turned the next page and the book didn't continue. It ended with a whimper rather than a bang and it left me disappointed at the end.