Book Spotlight: B is For Broken Edited by Rhonda Parrish 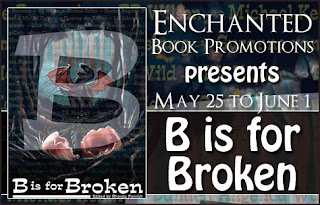 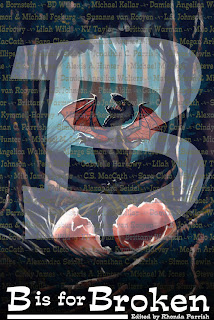 Broken people, broken promises, broken dreams and broken objects are just some of the ways these 26 fantastic stories interpret the theme of ‘Broken’. From science fiction to fantasy, horror to superheroes the stories within these pages cover a vast swath of the genres under the speculative fiction umbrella.

Rhonda Parrish is driven by a desire to do All The Things. She has been the publisher and editor-in-chief of Niteblade Magazine since 2007 (which is like 30 years in internet time) and is the editor of several anthologies including (most recently) Fae and B is for Broken.

In addition, Rhonda is a writer whose work has been in publications such as Tesseracts 17: Speculating Canada from Coast to Coast, Imaginarium: The Best Canadian Speculative Writing (2012) and Mythic Delirium.

G is for Glass by Gary B. Phillips:

Adina was born a girl of glass.

She had not been the first child with such a strange birth defect. The doctors had run tests on the child after her birth and delivered the news with practiced, solemn faces. Her mother carefully pulled back layer after layer of blankets to reveal a small translucent blue body, spindling arms and legs, and clear blue eyes that shone like the sky after a February storm.

She watched the children across the field kicking a soccer ball. One of them tripped and came back up with a bloody knee and grass in his hair. He was smiling though. She could smell the wet grass, hear the sound of their laughter. She wanted so badly to taste it.

She envied other children, hated them even, as they skipped up and down the stairs, two-at-a-time, even three. Jumping the last half dozen stairs and falling at the bottom, their voices howling with laughter and pain. Broken arms, scraped legs, and bloody noses.

Adina’s felt flush in her cheeks. She wondered if they were tinting red.

“I want that,” Adina said, and she pointed to the children playing.

“I know, but that’s where you got that.” Shamira pointed to the chipped glass of her elbow. “And this.” Her fingers brushed against Adina’s brow, where the sliver of missing glass was almost invisible to the naked eye if you weren’t looking for it.

“Some lives come with a higher cost. That’s why I’m here. To help you.”

That was the thing about Shamira. She never made it sound as if she was being paid to be there. She always gave her answers as a friend.

Even at six Adina knew her life was fake. She had been made in some strange, fake way and existed in a state somewhere between liquid and solid, always in suspended animation, never able to reach any point for herself.

She had heard rumors about other children of failed experiments. Most of them were thrown away. Those that were not formed small communities, under bridges, tent cities, at the edges of civilization. The children in her neighborhood traded stories about them, whispered words on fall winds. Freak. Monster. Alien. She wondered if there was another glass child. A glass boy, perhaps.