Book Spotlight & Giveaway: Eye of the Storm by Elle Klass 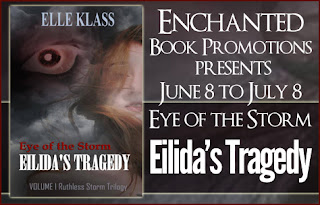 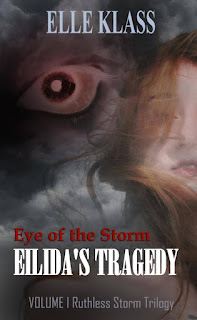 A disturbance at her neighbor's house piques Eilida’s curiosity. What she discovers is so shocking it sends her running through the mountainous woods during a thunderstorm. She slips on the wet ground, plummets down Mount Wilde, and slams into a large boulder beside River Freedom.

Eilida is transported to Lyden, where Sunshine, a receptionist at the local paper becomes engrossed in her story. The further Sunshine delves into Eilida’s life the more entangled their lives become. Paranormal events, frightening dreams, and terror filled memories draw the women together into an unthinkable web of horror.

What the Reviewers Say:

“It is a well written and compelling tale with an amazing concept that is worth the read. Great for young adults and adults as well.” - Michelle Randall for Readers' Favorite
https://readersfavorite.com/book-review/eye-of-the-storm

"This psychological paranormal thriller, reminiscent of the "Twilight Zone," is a chilling tale with mystery and intrigue saturating every page." - Marcha Fox, author of the Star Trails Tetralogy

"It's a Hitchcockian plunge by Ms. Klass, who is once again exploring the world of amnesiac episodes, violent deaths and childhood trauma." - John Reinhard Dizon author of The Triad, Transplant, and Nightcrawler

My sleep returned me to the grey and mushy, spongy ground that sank under my feet. The song was much closer this time. More audible, I could tell it was a woman’s voice. Through the thick air, I was able to make out movement and a shadow.

Instead of following the voice I pursued the shadow. I continued my journey towards it. I felt if I could just reach it the ferocious storm outside would subside and I would be out of harm’s way. The rain falling faster and harder, I was sopping and my visibility was more and more limited. Through the rivulets invading my eyes the shadow appeared to be large and oval. I grew closer and closer finally able to identify the soft form of a face.

The image before me was fuzzy but I could see outlines of the eyes and a nose but not the mouth. Under the nose was still something indefinable. Soaked to the bone I continued. Somewhere inside my soul I had heard the lullaby before. A memory flooded back in disjointed pieces; being held and rocked, a storm and a man.

Suddenly, to my right, he came out of the fog towards me. “There you are,” he said. His voice sent a sharp pang echoing through me. As a reaction, I ran. My feet driving hard into the sinking ground beneath them. The rain turned to blood and a wooden chest, the kind a woman would use to preserve her wedding dress in, materialized before me. Scrambling to reach it and close the lid I jolted awoke.

Tears covered my face. Outside, the lightning illuminated the sky and water pounded my window. The dream had unleashed a very real terror inside me. My body shivered and I yanked the covers up under my chin and curled myself into a ball. I could hear my own heart beat.

After what seemed like an eternity I remembered I wasn’t alone, my soon to be mother-in-law was in the extra room. At the moment I wanted nothing more than a mother’s comforting loving arms. I rushed out of bed to find her shaken from sleep as well. Together we went to the living room and sat on the couch. Not a word was said, but soon we both fell asleep in each other’s arms.

Elle was born into this world in Redwood City, California and spent her childhood growing in and around the San Francisco Bay Area. She graduated from the University of North Florida. To date she has published two novels As Snow Falls and Eye of the Storm Eilida’s Tragedy (Volume 1 Ruthless Storm Trilogy) along with a short story series titled Baby Girl.For fun she reads, spends time at the beach, travels, and enjoys time with her favorite friends, and family. She is a night-owl known to be a hermit during rainy days, as she loves the sun, and is mostly found poolside over the hot, humid summer months.

Eye of the Storm Eilida’s Tragedy

There is a tour-wide giveaway for two signed paperback copies and swag (two wrist bands and a keychain). Giveaway is international.