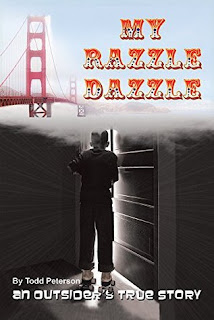 My Razzle Dazzle is an unforgettable trip of a lifetime.

Beginning with a Wisconsin farm in the 1960s, Todd Peterson characterizes every outsider's candid, moving, and often hilarious coming-out story that will take you apart and put you together again. His adventures are set against a backdrop of the cultural events of the sixties and seventies and a burgeoning gay Mecca that changed our world forever.

Along this unusual journey Todd not only meets carnival freaks and murderers, but also lions, tigers and bears... oh my!

Young Todd is ostracized and bullied by the kids at school, simply for being different. An outsider at school and at home, he retreats into the shadows. When Todd first amazes to Roller Derby© on TV, he identifies with the athletes who are rebels and outsiders like himself. Todd longs for a life of adventure and a place where he can belong and find acceptance and love. But does such a place even exist?

After graduating from college, Todd dreams of life beyond his Midwestern hometown and hitchhikes across the United States with only a suitcase, the money in his pocket, and a heart full of hope.

As this unique story unfolds, Todd encounters heart-wrenching setbacks and extraordinary breakthroughs. You will live this story as if it were your own and whirl with Todd around the banked track. Experience this thrilling ride of unexpected beauty and mayhem.

What wasn't so good was that this book seemed very much aimed at the American market. There was quite a bit of focus on Roller Derby, and after reading the book, I am still not entirely sure what that sport is about. Something to do with roller skating. Is it a race? A fight on roller skates? There were other Americanisms that I was just lost with. At the beginning, the reader doesn't know Todd's age, just that he was in a certain grade. Second grade, third grade, I've heard of them, yes, we do get American programmes etc. here in the UK, but I couldn't relate that to the ages involved. Later on, we get the ages of the characters, which was a welcome relief.

This is not an escapist book, there are some things in here that I read to get away from, not to read about and some of it was very emotional for me. There were times I had to stop reading and go back when I was in a better frame of mind. Bullying, abuse and just how alone Todd felt growing up really got to me.

I don't know if the author intended it that way, but there were a few sections of anti-women bias, which I didn't care for at all. There were also sections where the narrative was interrupted by the author writing of things today and it upset the flow of the storyline somehwat.

It takes courage to write an autobiography and I applaud the author for letting the reader into his world for a while. It is not an easy read by any means, but it is very poignant and thought-provoking.