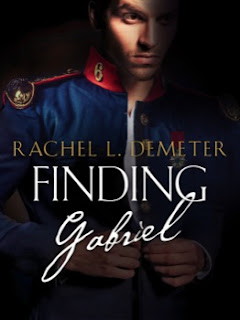 After a decade of bloodstained battlegrounds while fighting in Napoleon's army, Gabriel returns to the streets of Paris a shattered and haunted soul. Plagued by inner demons, he swallows the barrel of his flintlock pistol and pulls the trigger.

But fate has a different plan.

Ariah Larochelle is a survivor. Orphaned at twelve and victim to a devastating crime, she has learned to keep her back to walls and to trust no one. But when she finds a gravely injured soldier washed up on the River Seine, she's moved by compassion. In spite of her reservations, she rescues him from the icy water and brings him into her home.

Now scarred inside and out, Gabriel discovers a kindred spirit in Ariah – and feelings he imagined lost forever reawaken as he observes her strength in the face of adversity. But when Ariah's own lethal secrets unfold, their new love is threatened by ancient ghosts. Can Gabriel and Ariah find hope in the wreckage of their pasts – or will the cycle of history repeat again?

Perfect for fans of Gaelen Foley's Lord of Ice and Judith James's Broken Wing, Finding Gabriel features all the dark romance, searing passion, and historical intrigue of The Phantom of the Opera and Les Misérables.

Ariah stood beneath the immeasurable night sky as she admired the breathtaking view. She lost herself within the constellations, allowing those luxurious diamond strands to coil around her heart. Numberless stars reflected within the Seine’s glassy surface and set the water afire. Breathing deeply, Ariah reached out and folded her hands atop the stone balustrade.

This is where she’d found him. Her heart picked up speed as memories of that fateful night invaded her mind and body. Down below, water lapped against the embankment and infused the atmosphere with a soothing lull. A flashback of Gabriel’s motionless form materialized within the shadows . . . and Ariah’s chest constricted as she relived his every kiss and touch.

A gentle pressure whispered against her back. Gabriel’s unique aroma filled her spirit while strong arms enfolded her from behind. Somehow, some way, she’d known he’d be here tonight.

She sighed deeply and relaxed within his protective embrace. One hand lost itself in her curls and delicately sifted through the strands; the other applied subtle pressure to the base of her spine in a ghostlike caress. Breathless and at peace, she spiraled into a decadent trance. She drank in each sensation . . . the mesmerizing caress of his fingertips against her scalp, the wind’s crisp breath, the Seine’s haunting lamentations . . .

Gabriel brushed away the swarm of curls, exposing her ear to the night, and breathed against the fine cartilage. This was the moment she’d feared for weeks – the moment of their parting. Then he sang to her – his voice rich, warm, and sultry, and all other thoughts fell away.

“The gentle breath of winter sings,

It cools my brow and furls my wings.

And when the dusk at last descends,

I shall keep my hope, steel my heart, for never will thy love depart.

Now you are come all my grief is gone,

Let us forget those nights that never dawned.”

The rich cadence of his voice seduced her into calmness. Fighting to hold back tears, she rotated in his arms, never once leaving the security of his embrace. Indeed, she’d stay with him until the very end – and they wouldn’t part a moment sooner. She tilted her chin up and met his expressive gaze. The nearby oil lamp shone brightly behind Gabriel, silhouetting his strained features. She directed his body to the side, needing to see his eyes, directing the shadows from his face.

Gabriel shook his head while a riot of emotions crossed his features. “I shall never forget.”

Rachel L. Demeter lives in the beautiful hills of Anaheim, California with Teddy, her goofy lowland sheepdog, and her high school sweetheart of eleven years. She enjoys writing dark, poignant romances that challenge the reader's emotions and explore the redeeming power of love.

Imagining dynamic worlds and characters has been Rachel's passion for longer than she can remember. Before learning how to read or write, she would dictate stories while her mother would record them for her. She holds a special affinity for the tortured hero and unconventional romances. Whether crafting the protagonist or antagonist, she ensures every character is given a soul.

Rachel endeavors to defy conventions by blending elements of romance, suspense, and horror. Some themes her stories never stray too far from: forbidden romance, soul mates, the power of love to redeem, mend all wounds, and triumph over darkness.

Her dream is to move readers and leave an emotional impact through her words.

Don't be a stranger! Rachel loves to connect and interact with her readers: