Book Spotlight: Satyr From the Shadows by Rebekah Lewis 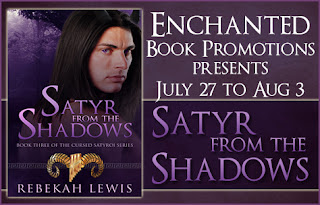 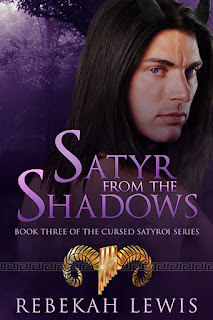 Long ago, a nymph fell in love with a mere mortal destined to be a legendary hero. Until the gods saw fit to tear them apart and tamper with fate.

Everyone has heard the story of Daphne and Apollo, of her transformation into a laurel tree to escape his obsession. If only it were so simple. Held prisoner for thousands of years, Daphne is close to death until a last minute rescuer smuggles her out of Olympus and to Melancton, the satyr she loves.

Melancton has always preferred to be on his own, keeping to the shadows and maintaining a stoic appearance. Only Daphne can be the light to his darkness, and now that she's returned, the fear of losing her again shakes him. With grave danger lurking on the horizon, Melancton and the satyrs of The Aegean Inn prepare for battle, but the odds are stacked against them.

Meanwhile, Apollo enlists the aid of Dionysus in his determination to reclaim Daphne and punish those responsible for her disappearance. Is it possible to survive the fury of the gods?

Whispers erupted in the flickering torchlight as Daphne rounded the corner. Inside, three figures perched on marble stone slabs around a boiling cauldron.

"Yes, yes. We all knew she would. It was the when which was questionable."

"I cannot recall the color of her thread."

"It was clear. I remember."

"Are you sure it was not red? I am thinking red."

Daphne cleared her throat, and the three Fates silenced themselves and turned to her, blinking in unison. Apollo had left her behind while he traipsed throughout the mortal world, enlightening mortals to art and music. Finally allowed freedom to roam about on her own, she embarked on a search for Hermes. When that failed, she began exploring and meeting the inhabitants throughout.

Which was how she found herself inside the cave of the Moirai. Three women dressed in white robes, in a cave, talking about threads; had to be who they were. Although, they didn't seem to be ghastly, old, blind women as the tales claimed, but beautiful women with creamy pale skin from the lack of sunlight.

"Apologies for interrupting. I was roaming and did not realize this cave was inhabited." She turned to leave.

"We have been expecting you."

Daphne didn't know what to say. It would probably be considered rude to deny the Fates any request. Were they talking about my destiny being miserable and twisting? The woman in the middle wrapping a silver, sparkling thread around a thick staff. The thread originated from a spindle held by the woman on the left.

"I do not wish to be a bother," she said, afraid maybe they were merely being courteous.

The woman on the right, smoothed a hand through her white hair as though to strengthen her appearance. She stood and glided to where Daphne lingered and took her hands. "Do not rush off. We rarely receive visitors on the Olympus side. Mortals." She waved her hand dramatically over her shoulder. "All the time they come to us, demanding this, bargaining for that. I am Atropos. Clotho is my sister over there." She pointed to the fiery-haired sister on the left. "In the middle is Lachesis."

"The nymph, we know," Lachesis commented.

"We were displeased. Zeus won't permit me to cut him." Atropos' voice was soft and high like a child's though she appeared, like the others, to be in her prime.

"His string." Clotho smiled. "What did you think she meant?"

Atropos pulled Daphne toward a long slab sitting across from them with the cauldron in the middle. Bubbles formed and popped at the surface of the acrid fluid, steam rising.

"Speak with us," said Atropos as she hurried back to her seat.

"We have only time." Lachesis glanced up from her twining the string around the staff. It had been silver and shiny moments before, but had darkened to black.

Rebekah Lewis holds a Bachelor of Arts in English Literature. She is an award-winning cover artist for digital publishers, and enjoys every minute of it when not immersed into a world of satyrs and Greek gods. Always feeling the need to be productive, she can be found creating something whether with words or images, or with arts and crafts. She resides in Savannah, GA with her cat, Bagheera.

Pre-order Satyr from the Shadows for the special price of $2 off. The book will go back to regular price on August 1st.