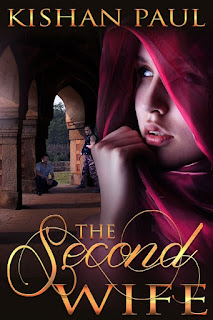 If you want to live, you must let go of the past...

Twenty-eight-year-old Psychologist, Alisha Dimarchi, is abducted by an obsessed client and imprisoned in his Pakistani compound for over two years. Forced to change her name and live as his second wife, her life is filled with trauma and heartbreak. Thrust into a world of violence and oppression, Alicia must fight not only to keep herself alive but to protect the lives of the people she now considers family. At night, she retreats into her memories of the only man she has ever loved – a man she believes no longer loves her.

Thirty-two-year-old handsome surgeon, David Dimarchi, has spent the last two years mourning the disappearance of his wife. After a painful and isolated existence, he begins the process of healing. It is then that he is visited by a stranger, who informs him that his wife is very much alive and needs his help. In a desperate attempt to save her, David enlists the help of a Delta Force Operative. Together they find themselves in the center of more than just a rescue mission. Will he be able to reach her in time and if he does, will she still want him?

“Ally.” The distant sound of David’s voice soothed her, enveloping her in a warm blanket of safety.

A smile tugged at her lips. Soon he’d crawl into bed and wrap his limbs around hers, cocooning her with his love.

Instead of the heat she anticipated, something coarse scraped against her cheek. When she tried to swat it away, her arms refused to comply.

“Baby, wake up.” Her husband’s echoed tone became louder, rougher. “You need to wake up.”

The urgency in it made her eyelids flutter, pulling her further away from the dark claws of sleep.

Like a silent movie, foggy images of a dimly lit parking lot invaded her thoughts. A woman, tall and lean, walked the deserted space alone. With each clip of her heels against the paved road, the haze cleared a little more. Ally’s heart raced when the woman’s features came into view. Long, curly, black hair, dark brown eyes, tanned complexion.

Two sets of hands emerged from the shadows, dragging her into the woods. The taller of the two men covered the woman’s mouth, muting her screams as she wrestled to break free, until the other one slammed a brick into the base of her skull, plunging her into darkness.

This must be a dream.

Rays of light pierced the darkness as Ally’s heavy eyelids fought to open. When she shifted, instead of soft sateen, her cheek scraped against a cold, hard surface.

“Alisha? Can you hear me?” This voice wasn’t David’s. It sounded thick, heavy with accent and oddly familiar. So familiar, she shivered.

Like me, you may have thought the slave trade no longer existed. It still does, it's just not called that any more, it's more likely to be called people-trafficking or sex-trafficking, bit it is slavery all the same.

Ally Dimachi, a young psychologist has been abducted on the orders of a former patient. A patient who was obsessed with her and she very rightly refused to treat him any more. But that didn't stop him obsessing over her. It just made him even more desperate to possess her.

Ally is taken from everything she's ever known: her husband, David, her loving family and placed into a nightmare that there seems no escape from.

She is called Sayeed's second wife, but in reality she is a sex slave. Sayeed's first wife has failed to give him a child and he is desperate to get Ally pregnant with a son.

Ally's rapes and abuse at the man's hands aren't glossed over or sugar-coated, but neither are they gratitious. I feel the book was stronger to have kept those scenes in as you know exactly what Ally is going through and what sort of terrible man Sayeed is.

The book is told in alternate chapters from Ally's and David's points of view. The one who was lost and the one who lost her. Both characters are well-drawn and you feel empathy for both of them. Ally is such an admirable woman, she's been to Hell and back, yet fights every day to survive and look after the other people in the compound who are under Sayeed's rule as much as she is. She has such strength, at times she despaired and felt like ending it all, but she rallied once more.

David is like a ghost of his former self, even when he tried to move on and started a new relationship, it was Ally he still loved and wanted.

This was not an easy, light-hearted read by any means, but it was compelling and heartfelt, a truly moving story about hope and overcoming the odds. I was engrossed from start to finish.

From daring escapes by tough women to chivalrous men swooping in to save the day, the creativity switch to Kishan Paul's brain is always in the 'on' position. If daydreaming stories were a college course, Kish would graduate with honors.

Mother of two beautiful children, she has been married to her best friend for over 16 years. With the help of supportive family and friends, she balances her family, a thriving counseling practice, and writing without sinking into insanity.