By D.S. AUFFENORDE
Exclusive to the Kensington City Examiner


Not long after I met with the mayor of Kensington City, Bobby Baumgartner (some consider him a statesman, others a snake-oil salesman—it’s not this reporter’ job to judge), I was accosted by a man hobbling down the street. The man’s gin-mill breath told me that he was clearly intoxicated. As I reached for my cellphone to call Kensington City’s Chief Constable, Pete Petaud (he and I had become acquainted in the course of my research for this story), the inebriated man began asking me to do a feature article on him. He said his name is Zachary Zero. Then he started ranting about sidewalks and flowers and how he’d wished he’d been sent to jail rather than becoming a gardener. When I suggested that he was a minor player in this saga of the superhero Electromancer, he took umbrage and replied that, to paraphrase, I’d want to hear what he had to say about that (and I quote) “flying, bat-crap-crazy dame Electromancer. “She’s beautiful, all right,” he said. “Hugely sexy, pun intended. So hot, she can knock a man’s socks off. She’ll knock a man’s block off, too, if he’s not careful!” Since I’m currently investigating Electromancer, I decided to ignore his sexist remarks and his drunken breath, and spoke with the man. But first, I did a quick search on my smart phone and discovered that Zachary Zero was at one time in charge of Kensington City’s treasury and funds—but no longer. [I will omit the alcoholic stammering and the slurring of words from the transcript.]
DA: Weren’t you recently fired from the position of comptroller for Kensington City?
ZZ: It was a bum rap. Extenuating circumstances.
DA: By whom?
ZZ: You ever meet the boss—uh, The Mayor?
DA: Are you implying that a man who might be a future prime minister of Britannia set you up?
ZZ: No, the boss … I mean The Mayor … he underappreciated me.
DA: Underappreciated?
ZZ: The Mayor, he’s got more gold than Midas. And here I am, a public servant, counting Kensington City’s beans … who wouldn’t take a little for himself? So when I became responsible for the city garden improvement fund … You gotta help me get those flower ladies off my back. Community service, hah! I’d rather be in jail, like I said. The ladies of the garden improvement society, they’ve made me their slave, I … But you want to hear about that Electromancer lady, though believe you me, she’s no lady. She was down at The Mick, you know the Manchester power plant here in town? What she did was shocking.
DA: How so?
ZZ: Just what I mean … shocking. She shocked my … some men who I never met before in my entire life. With her fingertips, that’s how. Saw it with my own eyes. She was naked, too.
DA: Mr. Zero, you’re telling me that you were at The Mick peeping at Electromancer?
ZZ: I plead the Fifth. We got that in Britannia too, you know, but we call it the Sixth. So I plead the Sixth.
DA: Are you saying you were down at The Mick when it exploded?
ZZ: Naw, naw, not me. Except Electromancer was. She might be the one behind all these attacks on the world’s energy sources.
DA: You said you saw Electromancer there.
ZZ: If you print it, I’ll deny it.
DA: What else do you have to say about Electromancer?
ZZ: She’s was there one second, gone the next. You think that’s how she flies?
[Mr. Zero again reached inside of his jacket, retrieved a flask, and drank from it. Then he held it up and opened his mouth but not a drop came out.] You wouldn’t have any juice on you, would you?
DA: Of course not.
ZZ: Jeez. What kind of writer are you? I thought all writers hit the juice.
At this point, Mr. Zero’s eyes rolled back into his head. He staggered backward slumped to the ground. Thankfully, at that moment, the Chief arrived with two of his officers and carted Mr. Zero back to the garden in the park.
Follow along as I continue my investigatory report on this mysterious Electromancer. In the meantime, you can also learn more about Electromancer, Blue Arrow, and others like Zachary Zero in the romantic, thrilling, superhero novel, Electromancer. 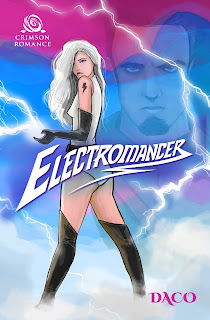 With a heart as pure as platinum and electricity at her fingertips!

She soars like a falcon and travels at the speed of light!

When arch villain Momo threatens to destroy the world with The Big Zapper—a weapon of mass destruction the likes of which has never been seen before—it’s up to Alexa Manchester and her new electricity-harnessing superpowers to stop him.

With a little help from her sexy chauffeur, Sigfred Sawyer, and some exciting encounters with the mysterious and handsome Blue Arrow, soon Alexa’s love life is charged up, too. And to defeat the seemingly invincible Momo, it might just take the naturally super power of love to save the day.

Offering all the Kabam! Pow! Zap! of beloved comic book sagas with the beating heart of a love story, this over-the-top, genre-blending send-up is sure to delight superhero fans and romance readers alike.

Readers of both comic book sagas and romance novels will find the sparks that fly between Alexa and Sigfred very electrifying indeed.
~ Colleen Sargent Library Journal

Daco is an award-winning author of the espionage-thriller series featuring CIA operative Jordan Jakes. Her debut novel, The Libra Affair, was a 2013 #1 best seller. Of The Libra Affair, Publishers Weekly said, “The keenly sharp intelligent female characters soar in this edge-of-your-seat adventure...”

Her short story The Pisces Affair was a 2015 Global Ebook Awards double gold medalist (Best Thriller Fiction and Best Science Fiction), a 2015 Shelf Unbound Notable 100, a 2015 Royal Palm Literary Award winner, and a Publishers Weekly “PW Pick”.” In its review of The Pisces Affair, Publishers Weekly wrote, “Jakes is a lively and witty narrator with the wits and skills of James Bond, and readers will savor her fresh perspective on being a woman in the male-dominated spy world.”

Daco holds a B.A. and M.A.S. from The University of Alabama in Huntsville and a J.D. from the Cumberland School of Law. She is a member of the International Thriller Writers, Mystery Writers of America, Romance Writers of America, Authors Guild, Alabama Writers Forum, Florida Writers, and Alabama State Bar. 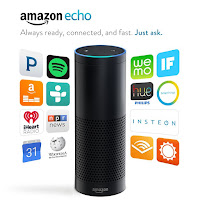