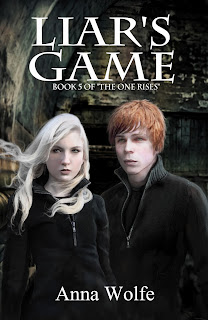 The Seer yanks his chain, and Silas could swear she does it for fun. Knowing that she manipulates everyone around her hasn't helped him at all over the last two centuries.

His little band of misfits has come apart. Edie is gone and refusing to speak to him. Mark is still trying to figure out how to control his ability and the Seer has ordered him to keep the boy in the dark. And Callie tempts him with a life he cannot have.

A seat on the powerful Witches Council has opened up and Silas is stuck in the middle of the machinations unfurling over which faction of the witches will gain the upper hand. Angry witches, lies, and murder are just the start.

Events in the Windy City will push Silas to the edge and reveal an unexpected enemy.

When people ask me if I have a hobby, I usually tell them "cooking."  This is partially because "I write pornographic urban fantasy novels" isn't always an appropriate reply.  Of course, telling people that I like to cook is a bit disingenuous.  What I really mean is that I love to eat.  It turns out that enjoying your food almost always involves cooking it yourself.  (Okay, maybe if you're very wealthy, you can eat out at amazing restaurants, have a private chef, and a personal trainer and skip the whole cooking part of the equation.)  Certainly, I wasn't taught much beyond basic cooking skills growing up and the work I've done expanding my repertoire has almost entirely been driven by the demands of my mouth.
Cooking, like many things worth doing, takes a great deal of time and energy.  And I'm not just talking about how long a meal takes to prepare.  After so many years, I have a number of recipes that are actually quite quick and easy.  But it takes time to learn how to read a recipe and assess whether a) you have or can develop the skills, b) whether you have the right tools, and c) how long it's really going to take.  The "estimates" in recipes for the time a meal takes to prepare are notoriously bad.  There were many evenings where I spent way more time than I intended making a meal that could only be described as "meh."  The same goes for figuring out what kitchen tools you need and which ones just take up a stupid amount of space in your cabinets.
Without question, the cuisine I am most comfortable cooking is Indian. Of course, saying that I know how to cook Indian food is sort of like saying I know how to cook American food.  India is a huge country with extensive regional differences in the cuisines.  That said, I make no claim to authenticity.  Instead, I have collected cookbooks (and discarded a few along the way) that let me create food I love to eat.  This particular love is shared by my husband—cooking, eating, and Indian food—and was the reason he and I went to India on our honeymoon.  In fact, most of our vacation planning starts with one of us asking the other, "what do you want to eat?"

Anna Wolfe is a college professor by day and a novelist by night.  In fact, writing urban fantasy is the only reason she is still (mostly) sane post-dissertation.  When she isn't writing, teaching, or dicking around on the Internet, she is probably cooking with her husband or watching trashy television.

You can visit her at: http://anna-wolfe.com