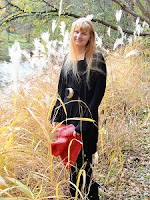 Laura Vosika, author of the Blue Bells Chronicles, is also working on several other novels and a non-fiction book on raising a large family. Past publishing credits include an essay in Glamour magazine.

Laura grew up in the military, visiting castles in England, pig fests in Germany, and the historic sites of America's east coast. She earned a bachelor's degree in music, and master's degree in education, and worked for many years as a freelance musician, private music instructor, and school band director.

She currently lives in Minnesota with six of her nine children, and assorted menagerie.

I let the story flow.  Then I go back and re-read and make sure it all hangs together and makes sense.

Always!  Parts of my books are very different from what I originally planned, because of this.  Angus, for instance, a Scottish inspector and mountain rescuer, was never in my plans.  However, one day, he simply walked in and sat down next to Amy, in Book Two, and I realized this is the cop from Book One!

Anything loaded with lots of crunchy vegetables--Chinese, pizza, salad!

I once would have said Scotland, as my books are set there.  I still love going there, but my future dream is to finally get to Russia some day.  I've studied Russian in the past, my best friend was a Russian interpreter, and I currently work for and with a lot of Russian music teachers.  It just seems to be a part of my life.

No.  I usually find it way too distracting.  I like silence.  Sometimes, I think this is ironic, considering I'm a musician by trade.  Other times, I think that's exactly why it's so distracting to me.
.
Could you tell us a bit about your latest release? 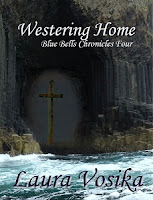 Westering Home is Book Four in what should be five books of The Blue Bells Chronicles.  The whole series tells the story of Shawn Kleiner, a modern American classical musician who has lifted his orchestra to great heights with his charisma and business skills.  However, he's also caused them, and his girlfriend, a lot of trouble, with his womanizing, drinking, gambling, and partying.  Finally, Amy has it, and leaves him abandoned in a medieval tower, while they're on tour in Scotland.

He wakes up in the wrong time, as does his cross-century twin, Niall Campbell.  They are mistaken for one another and caught in one another's lives.

The entire series is, ultimately a story of redemption, as Shawn lives and fights beside the heroes of Scotland's Wars of Independence, before returning to Amy, a changed man--and yet, one who still has some decisions to make as to how far he'll go to save those he loves.

The book is available at Amazon

My writing is heavily influenced by Margaret J. Anderson's In the Keep of Time, my love of time travel and historical fiction, and my own life as an orchestral musician.  Like Shawn, my protagonist, I played trombone.  I played semi-professionally for many years, and am quite familiar with his world, his instrument, and the music he knows.

Find a writers' critique group.  Meet weekly to read your writing, receive critiques, and listen to others.

Mother.  I have nine children, the joys of my life.  Writer.  For obvious reasons.  Musician.  I have spent my life in music, I play about a dozen instruments, I teach private music lessons, I occasionally perform on harp these days, and in the past have done a lot of playing in everything from solo situations to big bands to full orchestras.  I also directed a school band for five years, and taught general music for three.

Oh, boy!  Just like with musical instruments, I can't limit it to one.  Tempo Rubato by Brendan Carroll.   The Gargoyle by Andrew Davidson.  And the soon-to-be published novel The Feet Say Run by Dan Blum.  (I've read it because I'm publishing it.)

Excerpt of your latest release or coming soon book

Fluorescent lights glared down from a white ceiling.  White walls doubled their effect, washing the whole room in blinding white.  “I’ve died and gone to heaven,” Shawn muttered.  “Niall’s going to be so disappointed to find me here.”  He lounged in a spindly chair designed for discomfort, his legs in filthy breeks stretched in front of him.

He’d shed the robe and bloodied chain mail.  They lay on the scarred, wooden table, under the huge
claymore and two short, vicious sgian dubhs, between him and half the Inverness police force, several of whom threw the items curious glances at regular intervals, while striving to appear only professionally interested.

“Someone’s called my mother?”  Shawn asked for the second time.  His lower leg burned.  He suspected he’d been sliced with one of the MacDougalls’ swords. “She’s here in Scotland?”

“Aye, down in Bannockburn,” said Inspector MacLean, with the short black curls and ruddy cheeks.  In contrast to the other cops, he wore jeans and a rumpled navy blue sweatshirt.  He stayed back from the table, against the wall.  “Amy’s on the phone with her now.”

“Perhaps that should be Miss Nelson to you,” Shawn said.

Inspector MacLean stared straight ahead, not answering.  But his lips tightened.

“We must ask again,” spoke the man who must be the chief, “where you’ve been for a year?”  Beside him sat a middle-aged man Shawn had identified as Clive, with a well-padded paunch and thinning brown hair, reaching for a donut. But it was Inspector MacLean, standing calmly, avoiding his eyes, to whom Shawn’s gaze strayed over and over.

Shawn forced himself to look at the chief.  “I’ve spent about a quarter of the time at Glenmirril, and the rest at Stirling Castle, Cambuskenneth, Creagsmalan, Dundolam, and all over Jedburgh and Northumbria.”

The chief banged his fist on the table.  The coif slid off the hauberk to fall, clanking, against the sword.  “You mean to say you’ve been going around Glenmirril, which is packed with tourists every day, dressed like that!”  He indicated Shawn’s trews and stained, torn gambeson, over a medieval leine.  “With half of Scotland searching for you, and no one’s noticed?”

Shawn shrugged.  He looked again at the man who had hugged Amy and James.  The Inspector gazed at the far wall, his cheeks high with color.  Shawn looked back to the chief.  “No one noticed because I was there from June 1314 until early this morning, June, 1316.”