Guest Post: The Crown of the Queen by Jeffe Kennedy

One of the most exciting aspects of THE CROWN OF THE QUEEN and THE PAGES OF THE MIND coming out, is that they are both from Dafne the librarian’s point of view. And she is easily the most universally beloved character. Sure, readers pick others as their favorites, but everyone seems to love Dafne. One reader told me “Ursula is my friend, but I am Dafne.”
And I recently realized why. Dafne is a bookworm.

I don’t care if you’re a reader or a reader and writer both – if you’re a writer who doesn’t read, I can’t even with you – then the joy of books and reading is a deep and passionate one. And as we grow older, perhaps with the increasing competition of all the flashy streaming Things, it seems like get less time to read. Or, let’s be honest, we don’t make the time to read because we prioritize other activities, a lot of them required by adulting.

But remember being a kid and spending an entire weekend reading books?? Those are some of my fondest memories of childhood.

I remembered something else recently. It was a social even that triggered this memory, because I had to put down a book I was loving and go talk to people. I like those people and enjoy talking to them, but I had the fleeting wish that I could do both – take my book to read and be with those people I like.
And the memory hit me that I totally used to do that!

As a kid I’d invite my friends over to read. Did anyone else do this? My two best friends in elementary school, Linda Ceriello and Monique LaForce, loved to read also. They’d bring over whatever they were reading (sometimes an extra book for back up) and we’d lie around on my bedroom floor and read. Sometimes we played elaborate games of pretend, too. We had a great version of bicycle Nancy Drew, which involved seeding and then discovering clues. But we’d also read for hours.

Somewhere along the way, this became an unacceptable practice. I blame the extroverts and the non-readers. It turns out that it’s rude to read when other people are in the room! You’re supposed to put down your book (or, who are we kidding? Your eReader) and pay attention to them.

I really want to know who made up this rule, though we know the answer. They did.

Well, I propose a revolution. We can call it Dafne’s Law! It would state that it’s perfectly acceptable to socialize by reading together. We could have quiet reading rooms at conferences, where you can go in, wave at people and soak up that lovely reader atmosphere. There could be a room adjacent for emergency conversations and book-squeeing. 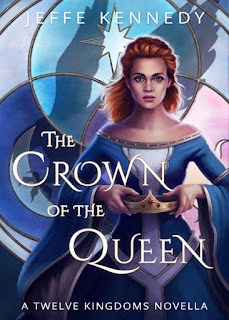 Dafne Mailloux, librarian and temporary babysitter to the heirs to the High Throne of the Twelve – now Thirteen – Kingdoms, finds it difficult to leave the paradise of Annfwn behind.

Particularly that trove of rare books in temptingly unfamiliar languages. But duty calls, and hers is to the crown. It’s not like her heart belongs elsewhere. But how can she crown a queen who hesitates to take the throne?

This novella will be part of a duology called For Crown and Kingdom, which will also contain a novella by Grace Draven called The Undying King

For Crown and Kingdom (The Crown of the Queen) will release on May 31, 2016 and will be available in digital format and print.