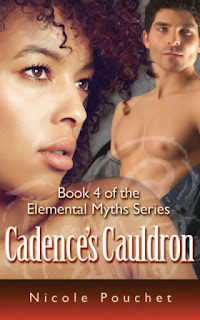 Cadence Williamson has life all figured out. Her London jazz nightclub gives her a place to sing, friends she calls family, and enough money to pay the bills. No man is going to block her chi, especially not the shark trying to buy her out. Who cares if she’s been dreaming of doing the deed with him? Cadence’s perfect plans unravel when she develops fiery superpowers, melts her mic, and has past life visions of an evil force snuffing out the city’s population.

Trystan Tawanti may have his fun, but he’ll never allow another pretty face near his soul again. The serial entrepreneur is determined to purchase Cadence’s nightclub and turn it into a profit machine—no matter the cost to his heart or to his Incan family’s world-saving destiny. He just has to ignore those pesky empathic powers and the feelings signaling his fated mate is near.

Will Cadence and Trystan learn to trust their destiny and each other before ancient evil catches up to them to burn London down?

“This is a song we like to call the ‘Lullaby for Insomniacs.’” Her smile heated the warehouse, and the men at the bar with Trystan exhaled their awe as one. Their audible fascination would have been amusing if he wasn’t just as securely under her spell as them.

She sang and her words penetrated his senses. The loneliness he felt, the ever-present searching for something more clawed at him, urging him to leap from his chair and force his way to her. The pianist played his solo as she swayed her body to the rhythm. More instruments joined in. There was a whole band back there. Trystan should have cared.

All he could do was watch Cadence’s body move. Her hips drifted from side to side and the outline of each leg could be seen through the dress. He loosened his collar, discreetly removing his tie and undoing the top two buttons of his shirt.

As he rolled up his sleeves, he noticed three other men doing the same. The room was definitely getting hotter. He was turned on by the singer, and his Spidey senses proved he wasn’t the only one. At least a dozen guys leered at the songstress. Couples let their hands roam freely under cover of the tables. Several women peeled off their cardigans and layers of clothing. One sat wearing nothing but a camisole.

Cadence licked her bottom lip as she launched into her final verse.

If I could reach the lever

I would make this thing go faster

There was nothing confusing about the state of the people in the club. A woman to his left ran her tongue over her ruby red lips, and a nearby man pressed against her backside, whispering in her ear before caressing her knee. The man she came with whispered into her other ear, and they both smiled as he let his fingers trail over the newcomer’s hand.

They were all ready to get it on. There was no wonder. The singer was a living aphrodisiac and someone had turned up the heat. The combination of sweltering passion and pure lust set off an animalistic response in the audience.

Cadence and her band bowed. The pianist and the rest of the musicians stumbled off, leaving her on the stage alone. She blinked into the spotlight, seemingly unaware of the extent of her effect on the audience. “Thank you,” she shouted over the crowd before handing the mic off to the emcee.

The emcee went on about a big-name jazz singer scheduled to perform in a few weeks. Trystan forgot to scold himself for not listening as he tossed a ten pound note toward the bartender and followed the singer to her back office...

Still amazed to be an adult, Nicole has managed to center her life on raising her two small sons and being true to her family (including husband and friends). She resides in Issaquah, Washington where she is a marketing executive. Happiest near the water, Nicole spends her free hours plotting her next escape, writing, and staring at the ceiling.