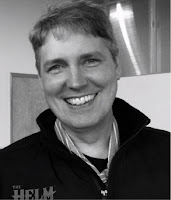 Fish Wielder is J.R.R.R. (Jim) Hardison's first novel novel (He wrote a graphic novel, The Helm, for Dark Horse Comics). Jim has worked as a writer, screen writer, animator and film director. He started his professional career by producing a low-budget direct-to-video feature film, The Creature From Lake Michigan. Making a bad movie can be a crash course in the essential elements of good character and story, and The Creature From Lake Michigan was a tremendously bad movie. Shifting his focus entirely to animation, Jim joined Will Vinton Studios where he directed animated commercials for M&M’s and on the stop-motion TV series Gary and Mike. While working at Vinton, he also co-wrote the television special Popeye's Voyage: The Quest for Pappy with actor Paul Reiser.

Jim has appeared on NBC's The Apprentice as an expert advisor on brand characters, developed characters and wrote the pilot episode for the PBS children's television series SeeMore's Playhouse and authored the previously mentioned graphic novel, The Helm, named one of 2010's top ten Great Graphic Novels for Teens by YALSA, a branch of the American Library Association. These days, Jim is the creative director and co-owner of Character LLC, a company that does story-analysis for brands and entertainment properties. He lives in Portland, Oregon with his lovely wife, two amazing kids, one smart dog and one stupid dog.

Both really. I usually start with an idea that just comes to me and I try to write as much of it as I can in a single streak (until I’m interrupted or pass out from lack of sleep). After that, I’ll noodle the idea around for a long time, thinking about how to turn it into a proper story. Once I figure out where it’s going in a general way, then I’ll start thinking about what meaning it might convey and what structure would be suited to best put that meaning across. After that, I’ll work out a skeleton narrative outline for the whole story. Then I dive in and start writing. I go at it linearly, from beginning to end. I won’t skip ahead, although I’ll frequently loop back to adjust and polish stuff I’ve already written as new things suggest themselves.

Characters will try to get away with murder, if you let them and the secondary characters are the worst. They are always trying to steal scenes and make whole chapters about themselves, or sometimes even hijack the whole story. You really have to keep an eye on characters.

Thin crust cheese pizza, light on the sauce. My wife says my idea of a perfect pizza is that you take a cracker, show it a tomato, sprinkle it lightly with cheese and then burn it.

I am a night owl. When I am writing in the morning, it is usually because I have been writing all night long.

I’m not a great lover of travel. I travel a lot for my work, often to exotic, lovely places that other folks might kill to go to, and I always complain about it. For me, the best thing is a comfortable seat, an apple (cold from the refrigerator) and a book.

As distant as you can get. My Fish Wielder trilogy is set on the mystical world of Grome.

Often, yes. Sometimes I’ll find a song that fits a particular scene or helps me stay in a specific mood and I’ll listen to it over and over as I write a section of the narrative. Other times, I’ll stick on some thematically correct playlist to run in the background while I work. And then, other times, I need it dead silent. Go figure.

My book is called Fish Wielder and it is an epically silly epic fantasy novel. It’s about a muscle-bound barbarian warrior and his talking fish who stumble their way into a quest to recover the lost Pudding of Power and destroy it before the forces of evil can use it to take over the magical world of Grome. There’s a bit more to it than that, but that’s the general idea. It’s the first in an epically silly epic trilogy. You see, when you are writing epically silly epic fantasy, it’s a legal requirement that you write a trilogy. That’s just how it is. And I’m particularly bound by those kinds of regulations because I have three Rs in my name. I might have been about to get away with just a single book if I had only one R—like E.R. Eddison and The Worm Ouroboros. On the other hand, if I’d had two Rs, like J.R.R. Tolkien or George R.R. Martin, I might have had two write seven books.  So, I think I dodged a bullet there.

A. It always takes a lot longer than I think it will—both in the writing and in the publishing stage. When I’m writing, and it’s going well, I often think, “Ah! Splendid! This will be done in no time!” and then it takes another six drafts and a year or something. And then, when a publisher says they’re interested, I often think, “Excellent! This will be on the shelf shortly!” and then, of course, it takes another year. Two other things: less adverbs and less adverbs.

No. It kind of goes how it goes. It’s a bit like riding a crazed buffalo, if you’ve ever tried that. You can kind of point it in a direction, but you’re going to go where the buffalo wants.

A. I started off (at about 10-years-old) reading the classics of epic fantasy. There was The Hobbit and The Chronicles of Narnia and The Lord of the Rings and The Barsoom Chronicles (and even The Dream Quest of Unknown Kadath). But when I turned thirteen, I stumbled across A Spell for Chameleon by Piers Anthony and I remember thinking, “Wait a second! This stuff can be funny? And still be good?!” And then I saw Monty Python and the Holy Grail. Between those two, it kind of changed my trajectory with fantasy. After that, I added books by L. Sprauge DeCamp, Fritz Leiber, Robert Asprin, Terry Pratchett and the Harvard Lampoon to the reading list. Of course, I continued with the classics like Conan, and I read the White Gold Wielder stuff by Stephen R. Donaldson (only one R in his name) and the Dragon Riders of Pern, and everything by Ursula K. Le Guin, and the Chronicles of Prydain and... you know, this is going to get unwieldy pretty fast. I read basically all the fantasy I could get my hands on and I augmented it with movies like Big Trouble in Little China and The BeastMaster. Maybe I’m just super impressionable, but they all left their mark and I hope bits of all of them can be felt in Fish Wielder.

Write. Just write a bunch. And write to amuse or entertain yourself first and worry about audience second. I know some folks who are very analytical about their approach and try to figure out who their reader is before they start and what kind of voice they need to write in to reach those folks. There’s something to be said for that, but it’s not how I like to do it. I always hope to write the kind of story I’d like to read, and that keeps it fun. Keeping it fun is important because writing can sometimes be a difficult and even painful process similar to extracting your own teeth. So, write a bunch and make sure it’s something you want to read so that you’ll keep at it.


What are three words that describe you?

Oh, that’s not fair. There are just too many good ones to choose from and too many I love too much. I will say that the book I have read most often is The Dream Quest of Unknown Kadath by H.P. Lovecraft. I read that book about once a year.

"This is one wild romp! I suspect some smarter reader than I could do a doctoral dissertation just fathoming the fantasy genre's famous legends that are parodied here. I'm not sure I've seen such preposterously determined critic-baiting parody since Xanth or Asprin's Myth-begotten series. I recommend it to anyone."

A. The Helm (which is actually a graphic novel released by Dark Horse comics). It was named one of the Top Ten Great Graphic Novels for Teens by YALSA in 2010.


I started my professional career by co-writing and producing a low-budget direct-to-video feature, "The Creature From Lake Michigan". Making a bad film can be a crash course in the essential elements of good character and story, and "The Creature From Lake Michigan" was a tremendously bad film. I like to think that I learned my lesson well, and after a brief stint recuperating as a freelance writer and film editor, I founded my own production company.

During its seven-year run, I wrote, directed and edited live-action and animation productions, including educational films, television commercials and television pilots. Shifting my focus entirely to animation, I joined Will Vinton Studios in 1997. There I directed animated commercial and entertainment projects, including episodic television (the UPN series Gary & Mike).

While working at Vinton, I also co-wrote the television special "Popeye's Voyage: The Quest for Pappy" with actor Paul Reiser. I co-founded Character LLC in 2000--a company that advises brands and entertainment properties on their stories. While working at Character I have given story advice to many of the world's largest brands including Discovery Networks, Target, Verizon, Amazon and Microsoft. I even appeared on NBC's "The Apprentice" as an expert adviser on brand characters.

In addition, I've done character development work and wrote for the PBS children's television series "SeeMore's Playhouse". After 21 years, I finally completed "The Creature from Lake Michigan" to glowingly positive reviews from lovers of questionable cinema. These days, I live in Portland, Oregon with my lovely wife, two amazing kids, one smart dog and one stupid dog. 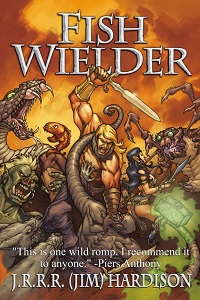 About the Book:
Fish Wielder
by Jim Hardison
Humour/Fantasy

In ancient times, the Dark Lord Mauron cooked the most powerful magic chocolate dessert ever made, the Pudding of Power.

One thousand and two years later, the evil leader of the Bad Religion, the Heartless One, is trying to recover the lost pudding in order to enslave the peoples of Grome. Only the depressed barbarian warrior Thoral Might Fist and his best friend, Brad the talking Koi fish, have a chance to save the world of Grome from destruction, but that's going to take a ridiculous amount of magic and mayhem.

"A great time. Fast and funny, it races along in a self-aware tone that should appeal to anyone who loves fantasy but has ever found themselves thinking, huh, that was a little melodramatic." ―Clay Johnson, author of OFF TO SEE THE WIZARD (Ravenswood Publishing, 2016)

1 paperback (US only) copy of Fish Wielder

1 hardback (US only) copy of Fish Wielder