Paul H.B. Shin’s debut novel follows a career as an award-winning journalist for more than 20 years, most recently for ABC News. He previously wrote for the New York Daily News. He was born in South Korea and lived in London during his childhood. He now lives in Brooklyn, New York.

You have to give the characters some room to breathe, of course, but I think it’s ultimately the writer’s responsibility to make sure the story doesn’t come off the rails because you get too focused on one character. Different writers work differently, but for me, there has to be a balance between plot and letting the characters develop organically.

I have a real soft spot for noodles of all kinds, which is the downfall of any plan I might have to go low-carb.

I may have naturally been a night owl when I was younger, but having worked a job with typical daytime hours all my life, that tendency has been trained out of me. When it comes to writing, I’m certainly a morning person because my mind is clearer in the morning.

I have an affinity for wild, sparsely populated places, probably because I’ve lived most of my life in large cities -- London, Seoul and now New York City. One place that’s on my bucket list is Patagonia in South America.

For “Half Life,” I wanted to ground the novel in real places because the story is about North Korea, and I felt the story needed real locations that would be familiar landmarks for Western readers. So, while the story does take place in several locations all over the world, they will probably strike a chord of familiarity in some way for most readers.

For my next novel, which is about a samurai retainer travelling from Japan to Elizabethan England, there will indeed be many locales that some people might call “exotic.”

Yes, but generally instrumental music that doesn’t have any lyrics.

“Half Life” is about a North Korean diplomat in New York City whose wife runs away with their newborn son, forcing him to chase after them before his superiors find out. When an American agent finds out about it, he tries to convince the diplomat, who's a key figure in North Korea’s nuclear program, to defect.

It’s outwardly a spy thriller, which is fertile ground for looking at human conflict. On a grand scale, a spy thriller is about what governments are trying to do to advance their own agenda, but it’s the individual who’s caught in the middle. In the case of “Half Life,” the protagonist is trapped in an impossible situation, and by telling the story in the form of a spy thriller, you can explore a whole host of other themes, whether it’s North Korea’s nuclear program, or a failing marriage.

On the writing side, the most important lesson I’ve learned is how important it is to keep up the momentum, especially the first draft. For me, I started making real progress when I focused on getting words down on the page without re-editing those words over and over again. There’s a saying that perfect is the enemy of good. I’ve found this to be very true when it comes to that first draft.

On the publishing side, I’ve learned that the publishing industry is going through some dramatic changes due to the Internet -- as are many other industries. But perseverance is still very important when it comes to finding an agent and a publisher that are a good fit for your work.

Yes, I’d focus more on pumping out that first draft to keep up the momentum, resisting the urge to edit stuff I’ve already written until the first draft is done.

My family and I lived in England for about seven years when I was a child due to my father’s job. And I think moving back and forth between the U.K. and Korea at a very impressionable age made me very inquisitive about what makes people tick and why certain cultures are the way they are. That’s probably at the root of what made me want to become a writer.

Don’t wait for inspiration to strike you to write. Set aside a time every day when you can write uninterrupted, even if it’s only 30 minutes. You won’t be very happy with the results at first, but that’s a good thing. That just means you have good taste. And the more you write, the more you will narrow the gap between your good taste and the quality of your own writing.

The Russian writer Alexander Solzhenitsyn played a pivotal role in me wanting to become a writer -- specifically his novella called “One Day in the Life of Ivan Denisovich.” It’s about a prisoner in a gulag. The ending just blew me away. It gave me new appreciation for what words could do to move the reader.

I’m also a great admirer of Graham Greene, who used the spy thriller to look deeply into the human heart. And I can read “The Great Gatsby” by F. Scott Fitzgerald over and over again.

“Half Life” is my debut novel. 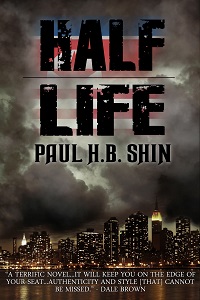 
The year is 1997. North Korea is suffering from a devastating famine that has shaken the foundation of the ruling class. A series of high-profile defections to the West has led the reclusive country's leadership into the grasp of paranoia.

Nuclear scientist Han Chol-Soo is on a tenuous diplomatic mission to the United States. There he is forced to embark upon a high-stakes pursuit after his wife disappears with their newborn son. Paralyzed with fear at the repercussions of her decision, Han turns to his colleague Park Jun-Young for help -- a man that he suspects is an intelligence operative. He soon regrets his decision as Park cuts a swath of mayhem in the name of helping Han, and the chase forces Han to confront the harsh realities of his home country.

“Half Life is a terrific novel. Right from the start you'll be drawn into many dark worlds—politics, espionage, and North Korea—and it will keep you on the edge of your seat right until the last page. Paul H.B. Shin’s authenticity and style cannot be missed.” –Dale Brown, New York Times bestselling author of Starfire (William Morrow)

“A gripping, taut espionage thriller, Half Life is enriched by the love story at its core and the refusal to give simple answers. I loved it.” –Robert Ferrigno, bestselling & award-winning author of Heart of the Assassin (Scribner)

“Paul H. B. Shin wraps an engaging tale of espionage and intrigue around a failed marriage in his new international thriller, Half Life. With sure-footed prose and vivid characterization, Shin takes readers inside the paranoid claustrophobia of North Korea’s political world, where even high-ranking diplomats live in constant fear. With North Korea's nuclear arms program as a backdrop, the eminently believable and thoughtful plot will have readers wondering if they're looking at tomorrow's news. A well-wrought debut.” –Jim DeFelice, #1 New York Times bestselling co-author of American Sniper (William Morrow)

(1) hardcover copy of Half Life by Paul H.B. Shin

(1) paperback copy of Half Life by Paul H.B. Shin

(5) ebook copies of Half Life by Paul H.B. Shin