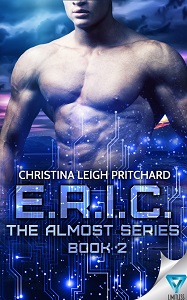 The sweet, charming Eric that Shay knew is officially gone. He’s been reprogrammed by Dr. Cole and the other scientists aboard the marine research facility that developed Shay. Now, instead of assisting Shay in her grand scheme to save her Optional Human Parent, Darla, from certain death, Eric has been reprogrammed to kill them both. That intimate moment on the beach they shared…lost forever.

With Eric’s help, Dr. Cole finds Shay and takes her back to the research facility where she will remain until she can be linked to her robotic host and terminated. Shay is placed into the care of a new program called N.I.C. that will analyze her data and keep her safe. Except, if the N.I.C. discovers Shay has already linked, he will initiate her termination immediately, ending any chance Shay has of saving Darla.

It’s only a matter of time…

Either Eric will locate her and finish the mission he’s been programed to fulfill, or the N.I.C. will discover Shay’s secret and finish Eric’s job for him. Eric tracks her back to the facility, and Shay fears it may finally be the end for her and Darla. She can’t bring herself to kill Eric, even if it’s to save her own life. One thing is stronger than even science…

E.R.I.C.
Someone was in the boat with Shay.
I adjusted my vocals to sonar for better hearing under the water and resisted using satellite vision. It was rare I ever received the capabilities and hated when new software downloaded to replace the existing. The lone keys never seemed to receive a satellite signal. It was a dead zone and if the upgrades were satellite based, I’d be without many defenses.
I swam faster. My main concern was the intruder I spotted in the boat with Shay. Was it a scientist?
There was a small island. I climbed out onto it’s shoreline and narrowed my eyes, scanning the boat. My vision stopped on the unidentified person. I finally downloaded updated software. While satellite images uploaded, I tried to focus the rest of my attention on the unknown intruder. Somehow, my communications programming didn’t register. I switched to satellite. It was slower than my usual communications, but it knew who the intruder was.

Mine?
What did Shay just call her?
She called her Mom and then, Darla.
Darla.
I couldn’t swallow.
Was she my human host?
“Mom?”
I remembered her! She used to cradle me in her arms and sing to me. She had the same thick, dark hair that tickled my face and those big, soft eyes…
I reached out—my eyes locking with hers.
My body jolted, electrical currents ran through my veins and I shook, vibrations overtaking me.
You’re being reprogrammed. Please stand by.
“I’m being what?” I could barely get the words out.
Everything blurred. My fingers, still webbed, curled in on themselves and my nails cut into my flesh. I couldn’t stop my teeth from chattering.
Reprogramming nearly complete.
Who was talking to me?
My eyes went into manual override. I tried to look to the left, but it was as if someone controlled my will to do so. My optics scanned without permission and when I tried to shut down satellite use, red lights flashed within my pupils, blinding me. Next, I could feel my limbs reject my thoughts. They belonged to someone else. Who could do this to me?
“What’s happening?” I jolted. Tears streamed down my face. Messages I didn’t want to read appeared before my limited visuals.
Kill the human host.
“I can’t do that!”
Kill the human host.
“But the human host is my mother!”
Sharp jabs of pain shot up my spine.
The voice echoed inside my skull. “I said kill the human host.”
“I won’t do it!”
Electrical currents paralyzed me. I couldn’t speak and my eyesight blackened. Something or someone forced my arms outward into the diver’s position.
“You will kill the human host,” the voice said. “You’ve been reprogrammed.”
My body struggled against me. I dragged my feet along the sand, feeling waves crash into my toes.
“Kill the human host.”
“No.”
“Then I will do it for you,” the voice said.
My body jerked forward, arching and splashing into the sea.

About the Author:
Christina Leigh Pritchard was born and raised in South Florida. Her first stories were written at the age of nine in spiral notebooks and in the various diaries she kept.

Since she’s upgraded to a computer, she’s completed over fifty books, including her ALMOST Series, signed with Limitless Publishing.

All new subscribers receive a free copy of C I N

Subscribers who purchase E.R.I.C. before 9/15 receive exclusive bonus material.
Please order your e-copy now and email your receipt to clp120@ymail.com