In Japan there are over fifty words to describe rain. Yesterday, as I sat at my desk looking outside and watching the rain fall, I remembered rainy season in Japan, and the way the rain would fall straight down to the ground in endless, relentless, heavy streams. 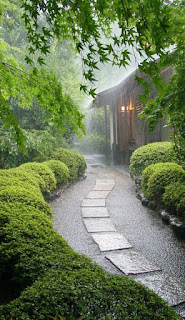 There is a word for that. Ooame. That means “heavy or big rain.” But it wouldn’t have been fuu because that is the kind of rain that combines with wind and blows around. Yesterday there was no wind at all, and the curtains of rain reminded me so much of the rainy season that I could almost feel the way it used to splash around my feet as I ran for the train, or the way it sounded on the big umbrella that was my constant companion for the month of June every year I lived in Japan. 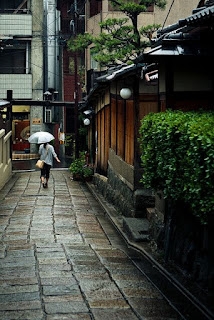 It rains a great deal in Japan, which could explain the need for so many words. Japanese people are also excessively fond of talking about the weather, and there is a lot to talk about. The heat (atsui!), the humidity (mushiatsui!), and the cold (samui!), and those exclamation points are absolutely necessary. When it was hot in Japan, it was scorching. When it was humid in Japan, it was like breathing in liquid air. And when it was cold, due to the lack of central heating in the first apartment I lived in, it was pretty darned frigid. 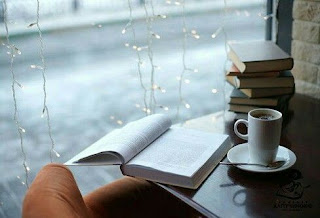 But that isn’t all there is to it. The Japanese are masters of the onomatopoeia. When I say,  “It is raining fuu fuu,” I can almost hear the wind blowing and the rain crashing against my window. For a language that can be amazingly vague (Subjects and direct objects?  Please. Who needs ‘em?), it is also astoundingly descriptive. They bring the term le mot juste to a completely different level. Finding that perfect word isn’t just an endeavor to them, it is an art form.

We should carry this into our own writing. Why use tired when you can use exhausted, broken-down, narcoleptic, done for, spent, drained, tuckered out, drooping, dead on one’s feet, played out, drowsy, or pooped? Tired might work, but why settle? Add layers and subtle beauty to your writing by searching for the word that isn’t just good. Look for the word that is stupendous, marvelous, and superb.

And the next time it is raining, look outside and find a way to describe it to yourself. Is it a chilly rain, or a driving rain, or merely a drizzle? We might not have fifty words for rain in English, but there are infinite possibilities for how you can describe it. 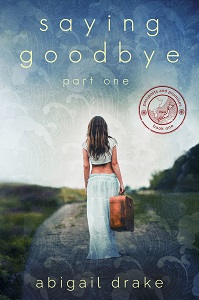 Samantha Barnes always dreamed of seeing the world, and only has a few months left before she starts a semester abroad in Japan. Enough time to say goodbye to her friends, polish up her language skills, and maybe even squeeze in a quick fling with handsome fraternity boy Dylan Hunter.

All she wants from Dylan is something casual, and perhaps some mind-blowing sex, but things don’t work out as planned. Dylan wants a lot more from her than a hook-up. Before Sam realizes what’s happening, their relationship has become serious, something she never intended. And then she discovers Dylan is hiding a dark secret that makes breaking up with him nearly impossible.

Sam is running out of time. She has to leave soon. She has no choice. But leaving Dylan could mean more than just the end of their relationship. It could also mean destroying him completely.

I walked out of the classroom and straight into Dylan Hunter. He’d been standing right outside the door to my classroom.
“What are you doing here?”
I’d wanted to see him in the sunshine, and I’d gotten my wish. He was even better looking than I remembered, with his black hair, dark eyes, and sexy crooked smile.
“This was the only Japanese III class being offered this semester. I took a chance.”
I hesitated, not sure if this was nice or a little creepy. “Oh.”
He lifted a bag he held in his hand. “I brought lunch.”
His face, so full earnestness, dispelled any worry I had about his creepiness factor. We sat outside and ate the lunch he’d prepared for us; peanut butter sandwiches, apples, and brownies.
“I bought the brownies, but I made the sandwiches myself.”
He handed me a soda. The September sun peeked through the leaves on the trees, warming us as we sat on a stone bench and ate. He turned and straddled the bench to face me. My cheeks got a little hot. I’d barely had time to pull my hair into a bun this morning. I wore yoga pants and a hoodie, and not a touch of makeup. The longer Dylan stared, the more uncomfortable I became.
“What?”
“Are you still with Max?”
I shook my head. “We broke up weeks ago.”
“But do you still love him?”
I decided the direct and honest approach would work best. “I never loved him and he never loved me. It ended well. We’re better as friends.”
He grinned and the effect shocked me. An odd tingling sensation rushed through my whole body. If his smile could do that to me, I had to wonder what his other parts could do. His lips. His hands. Everything else.
He leaned forward and, for just a second, I thought he might kiss me. Instead, he got really close and stared into my eyes. “That’s good news, Sam.”
“Why?”
“Because I want you to be mine.”
My half-eaten brownie remained clutched in my hand as I tried to formulate a coherent thought. I took a sip of soda and stared at him.
“That’s awfully direct, isn’t it?”
He shrugged. “Why pretend? It’s what I want. Why shouldn’t I be honest about it?”
“You hardly know me.”
“I know enough.”
He reached for my hand, lacing my fingers with his. It reminded me of our walk home from the frat.
He let go of my hand and looked at his watch. “I’ve got to go. Can I see you later?”
“When?”
He gathered up our trash and tossed it into a bin. “How about dinner? Would seven work for you?”
I hesitated only a second before answering. “Yes.”
“I’ll pick you up at the Theta house. Wear a dress.”
I stood next to him, holding my books against my chest. “I’m not sure if this is a good idea...”
He touched my face, his thumb stroking my cheek. “What’s there to be unsure about?”
“You’re a nice guy, but I’m leaving in January. I’ll be in Japan for the whole semester. It would be crazy to get involved with someone right now.”
“It’s dinner, Sam. No worries. No strings. Just food.”
“Just food?”
“Just food. I’ll see you at seven.” 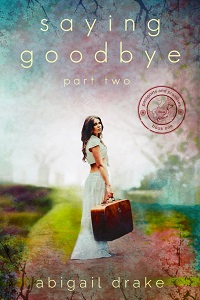 What if you meet the right person…at absolutely the wrong time?

When Samantha Barnes starts her semester abroad in Japan, she brings along a heavy load of emotional baggage. With her ex-boyfriend in the midst of a mental health crisis back home, she’d been forced to make some difficult choices, choices that now fill her with guilt and remorse. She also made promises to him she isn’t sure she can keep, especially when she meets Thomas MacGregor, an irresistibly charming Scottish rugby player. Thomas is studying at the same university as Samantha, and, although she tries to fight it, she begins to fall for him. Hard.

Life in Kyoto is everything Samantha could imagine, but, when tragedy strikes, it sends her on a downward spiral into darkness. Will she be able to come to terms with what happened, and have a future with Thomas, or will she forever be plagued by regret?

Forgiveness is a tricky thing, especially when the person you need to forgive most is yourself. 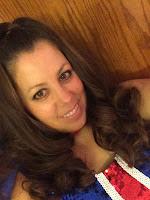 Abigail Drake has spent her life traveling the world, and collecting stories wherever she visited. She majored in Japanese and International Economics in college and worked in import/export and as an ESL teacher before she committed herself full time to writing. She writes in several romance genres, and her books are quirky, light, fun, and sexy. Abigail is a trekkie, a book hoarder, the master of the Nespresso machine, a red wine addict, and the mother of three boys (probably the main reason for her red wine addiction). A puppy named Capone is the most recent addition to her family, and she blogs about him as a way of maintaining what little sanity she has left.

Ten free eBook copes of Saying Goodbye Part One will be given to people randomly selected.

Sign up for Abigail’s newsletter to be eligible: http://madmimi.com/signups/181796/join