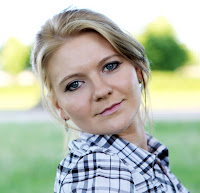 Her stories transport the reader into the darkly sensual world where the magic of romance meets fantasy. When she’s not writing, she enjoys spending time with her husband and sons.

To learn more about Lyn, visit her website at

I definitely let the story flow – or rather, I let my characters take me on a journey. I usually know certain aspects/scenes that will be crucial to the story, but a lot of it remains a mystery to me up until it actually happens. What I do is I get acquainted with the characters. I need to be able to get inside their heads and see everything from their perspective; and once I can do that – the idea becomes a story.

All the time. That’s one of the reasons plotting doesn’t work for me, because when they decide something, there is no changing their minds. And if I try to force them into something, not only does the story ring false, but I also find myself battling writer’s block.

I learned to let them roam the hard way, but now I can’t imagine any other way. They shape their stories, and I enjoy the process of discovery.

Chocolate. I have a sweet tooth.

A night owl through and through. I love the calm of the night. The peace. It’s when I do most of my writing.

I dream of visiting every castle in Europe. I simply love history, and I’m fascinated by the tales of love and war that are always associated with those magnificent places. Even when in ruins – they leave me breathless and wanting for more.

All the places in my books are fictional, but my characters don’t sit in one spot. Ciaran (the hero of Forged in Fire) is “visiting” the Underworld – how is that for a distant place?

Sometimes. But I usually find myself wanting for silence, so I can listen to the voices of my characters.

Forged in Fire is the sequel to my debut novel Till Death and Beyond, and it depicts what happens when you bargain with a demon and end up in Hell.

I had a lot of fun creating the Underworld and putting my characters through one situation after another. It wasn’t as much fun for them, though. The story is intense, fast-paced and action-packed. And the romance is hot!

I learned that publishing is hard work and that you shouldn’t expect a miracle. I also learned to listen to my characters and write what I feel despite the ever-changing trends. It’s pointless to try to keep up with them. If you love what you do – it will shine through!

I can’t think of any single thing.

I think that every event, be it big or small, influences and shapes us. And it’s the same with my writing – I might not be writing about myself, but there is a lot of me in my characters. If I had a different life, for example, I don’t think Forged in Fire would exist. Or if it did, the story would go differently.

Write what you love, and love what you write. If you do – the readers will see it.

It usually depends on the mood. Right now, it’s Dan Brown’s The Da Vinci Code. I just re-read it.

Till Death and Beyond 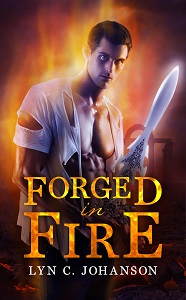 Lyn C. Johanson continues her scorching Witch World series with a new story of a human fighting to survive in Hell, and a dangerous beauty who might cost him his soul.

Desiree ruled a domain swarming with the worst sinners ever to walk on Earth, until her dual nature became too dangerous for the Demon Council to ignore. Now banished, she finds herself intrigued by an enigma she encounters—a decent soul in the land of rotten scum.

A FIGHTER DOOMED TO HELL…

To save his newborn nephews, Ciaran sacrificed his life to spend eternity in the Underworld. Yet becoming a plaything to be used and abused is a fate he is determined to avoid.

A PASSION FORGED IN FIRE…

Temptation stokes the flames in both their hearts and bodies, but when faced with the reality of their circumstances, those flames might burn them both to ash. For in a demon world defined by supernatural abilities, a human must remain a slave, and she—free from any weakness her enemies might take advantage of.

Amazon
Please note that although Forged in Fire can be read as a stand-alone story, I would strongly recommend reading Till Death and Beyond first, as the world builds from one book to another. Available on Amazon

Excerpt:
“Bow before your master!” One of the guards spat an order.
“I bow before no one,” Ciaran muttered without turning. That was one thing he refused to do. Ever. No matter how many whips sliced his flesh.
Instantly, he felt a fierce blow to his inner knee. His leg bent, and he went down. Ciaran gritted his teeth at the impact with the hard floor, and before the guard could deliver another blow, grabbed for the nearest weapon.
Suddenly fire flashed through the space. As one, the guards sank to the ground, bowing their heads.
“Enough!” Huge eyes appeared in the air, above them.
Ciaran frowned. Stood up.
The eyes narrowed. Green flames consumed the irises, and for a second he thought the room would catch fire.
“Out!” A sharp order rang out, and was followed before the echo subsided.
The moment Ciaran was left alone, shadows began swirling, the eyes got smaller, until a figure stepped out of the darkness. He thought he was prepared for whatever was coming. A two-headed ogre wouldn’t have surprised him, but when the shadows dissipated, and his eyes locked with those of the creature he’d been summoned by, he forgot whatever it was he wanted to say.
Her eyes were no longer round, but almond-shaped, slightly tilted downward toward her straight but narrow nose. Those eyes missed nothing—and right now, they were focused on him. Not burning, but the way her irises caught the glare of light, it appeared to glow with a cat-like luster.
In vibrant copper-red, the strands that escaped her knee-length braid danced like flames against her flawless, porcelain skin, conjuring up an image of a fragile, ethereal beauty.
One look at her, and Ciaran knew there was nothing fragile about her. She radiated power, and he had no trouble seeing why the guards bowed before her. Why everyone was afraid to even mention her name. The raw energy flowing around her was nothing he’d ever experienced. No demon he’d met possessed a smidgeon of it.
He was screwed, he concluded, determined to get this over with as quickly as possible.
“What do you want from me?” he demanded, finally coming to his senses.
She approached, no hesitation in her lithe, tall body. It moved with hypnotizing grace, accentuated by her simple leather pants and top that hugged her like a second skin. If he thought she had power before, it was nothing compared with the sizzle of energy that shot through him when she stretched out her hand, and gently touched his cheek.
It took everything he had to keep his body stone-still. He dared not even breathe. He felt if he did, she could actually bring him to his knees. And as seconds ticked by, her lips curled into a lazy smile, transforming her face from beautiful to stunning. She was a vision—a vision he expected to morph into a nightmare at any moment.
That’s when she whispered, “I want to play.”

a Rafflecopter giveaway
at November 29, 2016