We love alpha males as heroes in our novels, right? They’re strong, stubborn, and surly—until, of course, our heroine breaks through the outer shell of steel to find the vulnerable heart inside.
But what if your hero is truly broken? What if the outer shell he has built up is almost impenetrable. Almost.

That was the challenge I faced when writing Black Diamond and the book’s hero, Coleman Ryan. I can’t spill the beans as to why Cole is so broken, but when he meets heroine Jena—a wildlife enforcement agent in Terrebonne Parish, Louisiana—he has forgotten how to even talk to another person.

Which could be why his first response to encountering Jena is to slam the door in her face. She might be a game warden investigating a nuisance alligator call, but she’s also a cop, and there’s nothing like a freaked-out hermit slamming a door on her to rouse her curiosity. And she has the badge to back it up.

Jena wasn’t sure what to expect when she knocked on Cole’s door and demanded that he open it. A crazy guy, maybe. A criminal. Certainly a man either trying to escape or trying to hide, or both.
When she left that first meeting with Cole, she still couldn’t answer that question. It would take a while to figure out Cole’s story.

Five years earlier, well and truly a damaged man, Cole Ryan had arrived in Louisiana, continuing to drive south until he could go no further without falling into the wetlands leading to the Gulf of Mexico. There, in the southern reaches of Terrebonne Parish, he found an isolated house and proceeded to learn how to live alone. Once he bought the house and got his utilities, it didn’t take him long to slide off the grid of society. He hunts or fishes or grows his own food. He does his own repairs. He hasn’t cut his blond hair since he arrived, so it’s almost waist-length. He speaks to no one, doesn’t socialize, has no phone or email, no past or future. For Cole, today is all he has.

Face it, this man is NOT ready to fall in love. He struggles to carry on a simple conversation—as Jena finds out once she uses her badge to force him to talk to her.

Before long, however, Cole finds his desire to live off-grid at odds with his desire to know Jena, in whom he recognizes another damaged soul. (Yeah, she’s pretty broken herself but is healing thanks to a strong social and professional network.)

Jena instinctively trusts Cole, and they grow closer as they are both drawn into a criminal case involving dangerous dealers of a bath-salt drug ravaging the parish. The closer they get to answers, the more the danger to both of them grows.

But I had to be careful with these characters. Sure, they could be attracted to each other from the get-go, but I couldn’t move their relationship too quickly without being untrue to their personalities, especially Cole. Fragile characters need special treatment, and I hope I handled Cole and Jena well as they began to heal and even imagine a future.

So, how do you like your heroes? Strong and stealthy, or maybe just a bit damaged? 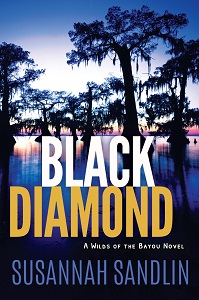 For some people, the untamed beauty of the bayou is a place to hide. For Louisiana wildlife agent Jena Sinclair, it’s a place of refuge—one where she can almost forget the tragedy that scarred both her skin and her soul. But when the remains of yet another fisherman turn up, Jena realizes that Bayou Pointe-aux-Chenes is not safe for her…or anyone else.

The mysterious deaths aren’t her only problem. A dangerous drug known as Black Diamond is circulating through Terrebonne Parish, turning addicts into unpredictable sociopaths. Jena’s investigation leads her to Cole Ryan—a handsome, wary recluse struggling with his own troubled history—who knows more than he’s willing to admit. If they want to stop the killer, Jena and Cole must step out of the shadows of their pasts and learn to help each other…before the evils lurking in the bayou consume them both.

eBook 1, Wild Man’s Curse, on Sale Through the End of October
for $1.99 at Amazon

Cole stood inside the door, knowing she’d be there any second. She would knock, probably with a firm rap to remind him who had the authority here, and it wasn’t him. She would expect to come inside, and while he could deny her entrance without a warrant, he wouldn’t. It would raise too much suspicion.
His fists clenched and unclenched. Again. Again. The press and release of tension filtered out some of the stiffness from his arms and shoulders. The woman was striking, her wistful expression had resonated with him, and he had wanted to look at her. He’d looked long and hard enough that she’d caught him standing in the doorway like an idiot. Otherwise, he could’ve pretended to be gone and not answered his door. Now, hiding wasn’t an option.
The last thing he needed in his life was a woman. Especially a woman with a badge and a gun.
Though expected, the sharp knock made his shoulders jerk upward, and his fingers clenched again into fists. Weapons his body provided to protect itself, to protect him, to keep everyone away.
“Sir, I know you’re in there. I’m Agent Sinclair of Louisiana Wildlife and Fisheries.” Her voice was clear and no-nonsense. He tried to place her accent—she wasn’t from Terrebonne Parish but didn’t have a typical Southern accent either. “I want to talk to you about the gator in front of your neighbor Doris’s house. It’ll only take a minute or two.”
Damn. Now that he knew his neighbor’s real name, the Wicked Witch was dead. Now she was Doris.
He took a deep breath, turned, and opened the door an inch. Maybe two inches.
A hazel eye, heavy on the green, and the bill of a dark-green baseball cap came into view, peering through the crack. A strand of hair that trailed over her forehead from beneath the cap shone like pure molten fire.
“You can open it all the way, you know. I don’t bite. I’d like to come inside for a few minutes and talk, or you can come out on the porch. Having a conversation isn’t optional, but where we have it is. For now.”
Damn it. Cole had to admit he was stuck and it was his own damned fault for standing in the doorway and watching her for so long. He opened the door wide, dread giving way to curiosity when he finally saw her face up close. She was beautiful but lightly scarred, more on her cheeks than her forehead, so she’d probably been hit by flying glass rather than having her head go through a windshield. Fairly recent too. The spots were still pink, but they were scars and not wounds. Five or six months old, he’d say. Eventually, they’d fade and, with her fair skin, would easily cover with makeup. If she hadn’t been so close—not to mention his fixation on her face—he wouldn’t have noticed them even now.
“Are you going to let me come inside, or are you coming outside, or do I need to make it an official order?”

Suzanne Johnson writing as Susannah Sandlin is the author of the award-winning Penton Vampire Legacy paranormal romance series, including the 2013 Holt Medallion Award-winning Absolution and Omega and Allegiance, which were nominated for the RT Book Reviews Reviewers Choice Award in 2014 and 2015, respectively. She also wrote The Collectors romantic suspense duology, including Lovely, Dark, and Deep, 2015 Holt Medallion winner and 2015 Booksellers Best Award winner. Her new suspense series Wilds of the Bayou started in 2016 with the release of Wild Man’s Curse and continues with Black Diamond. Johnson is the author of the award-winning Sentinels of New Orleans urban fantasy series. A displaced New Orleanian, she currently lives in Auburn, Alabama. Susannah loves SEC football, fried gator on a stick, all things Cajun, and redneck reality TV.

a Rafflecopter giveaway
at November 10, 2016