Release Day Giveaway: From the Edge by Anna Del Mar 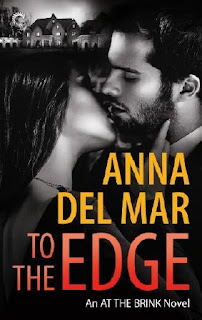 To learn about kink, she had to learn the ropes. Yet she never expected to be so compromised she'd need rescuing. And by him. The first man she'd ever loved. The former navy SEAL who'd broken her heart.

Naked. Cuffed. Caged. Is this the sweet senator’s daughter I left behind?

I didn't know it was her when I rushed into that room filled with flames, but I'll never let her go again.

She’s proposed a unique way to thank me. It could bring us both to the edge of ecstasy—or to the point of no return.

Clara wants to submit. To me. Totally. Damn any limits. The very thought of it has brought me back from the dead.

But a stranger is watching from the shadows. He’s made us his fantasy. And he plays rougher than I do. Where he’s taking us now is somewhere so dark, and so dangerous, that this time it could be inescapable.

I’m so excited to introduce to you my newest hero, Noah Blake, the protagonist of my latest release, To the Edge. To the Edge is about Noah Blake and Clara Luz, a couple who stole my heart and fired my imagination in this second chance love story. In a nutshell: To learn about kink, Clara had to learn the ropes. Yet she never expected to be so compromised she'd need rescuing. And by him. Noah Blake. The first man she'd ever loved. The former navy SEAL who'd broken her heart.
You all may remember that I write stories about strong heroines struggling to find their place in the world and the brave, sexy, kickass heroes who will fight to protect them with all they’ve got. Some of my stories are romantic suspense, like The Asset and The Stranger. Some are erotic romances, like At the Brink. If you liked At the Brink, you will love To the Edge. Honestly? It’s the sexiest, kinkiest, erotic romance I’ve written to date.
Today, I’m delighted to share the second chapter of To the Edge, the first time we meet Noah Blake, a brawny, brainy ex-SEAL determined to reclaim Clara’s heart and fight for redemption to the very edge of sexual obsession.
Enjoy!
AdM

Noah
The cloud blackening the sky above my kitchen window alerted me to the sort of trouble I didn’t need. My senses ratcheted to high alert. I downed the last of my protein shake, plunked the glass on the counter and raced upstairs. It was a fluke that I’d left my office in the middle of the day and spotted the smoke at all, but after stalking my prey for forty-two hours straight, my eyes needed a break.

For several days now, my team and I had been trailing one of the world’s most wanted, a terrorist with many aliases, code named Josephus. He was the mastermind of a series of lethal attacks on Americans abroad. His deadliest role included recruiting disaffected children of the West to kill their own kind, something he did over the Internet and the Dark Net with infuriating regularity.

My team and I had already identified and helped capture most of Josephus’s recent contacts, but I was determined to get the fucker. I’d traced the asshole all the way to Spain. The takedown operators had reported they’d missed him by less than five minutes. The snake had slithered away at the last minute, but the raid had netted the rest of his cell, including his cousin Rashid, who was now in paradise fucking a bunch of ex-virgins. Son of a bitch. I was going to get Josephus.

I reached the top of the spiral steps, barged into the octagonal room at the top of my newly restored widow’s walk and grabbed the binoculars. From my perch high above the ground, the profile of a single roof pierced the tree line west of me. Sure enough, a column of smoke rose from the clearing, billowing from the only other house remotely close to mine, a place I knew well.

Dammit. We didn’t have a fire station on Avalon Island. We did have a loosely organized volunteer fire crew, mostly composed of local fishermen who weren’t sitting around waiting to fight a fire at the moment. Even if I gave the alert, it’d be at least thirty minutes before anyone showed up. Hell, if anyone was trapped in the house, they’d be toast by the time the fire crew got there.

I ran down two flights of stairs. What the hell was going on? In the past two years, no one had visited the Luz compound, not even summer renters. In any case, the island’s brief summer season was over. Leaden clouds darkened the afternoon and the Chesapeake Bay roiled in advance of an October gale.
I jammed my arms in my jacket and rushed out the back door, coming to a screeching halt at the end of the deck. My body refused to move forward. An invisible barrier held me back, jolting me like an electrified fence. My heart boomed. Slowly, I put a tentative foot on the ground. The lawn bulged and pulsed under my shoe. I gritted my teeth. Tick-tock, a countdown began in my mind. Shit. I jerked my foot back.

“There are no improvised explosive devices buried in the yard,” I muttered, pacing the deck, trying to impose logic over irrational emotion. “Stick to reality, Noah.”

None of my frozen muscles reacted to my brain’s logical appeal.

“Fuck this.” I stalked back into the house and kicked the door shut. “You fucking coward.”

I plopped down at the base of the stairs, raked my fingers through my hair and sank my face into my hands. How the hell had I turned into such a useless pile of crap? I wasn’t some ignorant grunt. I was an ex-Navy SEAL and a high-level intelligence operative. I’d fought wars, infiltrated hostile countries and hunted the world’s most dangerous terrorists, yet here I was, trapped in my own house. What a joke. I pressed at my temples. Someone could be in danger and all I could do was watch from afar.

I clenched my jaw so hard that my teeth ached. Even a piece of shit like me had to admit that the house currently on fire was the number one reason why I’d chosen this place for my self-inflicted exile. The Luz compound was one of the few places on earth I associated with happiness. Those memories were the only thing I had left. Would they evaporate like so many other things in my life if the house burned?

Hell, no. I couldn’t let the memories go. Not yet, anyway.

My gaze fell on the little green bottle on the kitchen counter. The last time I’d had some of that, I’d been sick for days. But it had allowed me to make it through the funeral. I’d even gone to the grocery store for a few minutes. LCOS, the guys from the support group liked to call it, liquid courage on steroids.

I got to my feet and made my way to the counter. I picked up the bottle and rolled it between my fingers. No label, no warnings, nothing. Home brewed by some biochemically savvy veteran in his basement and most definitively not FDA approved. If it were any other uninhabited house on the island, I might have called it in and been done with it. But this was the Luz house. I couldn’t let go. What the hell. I unscrewed the top of the bottle and, after suctioning half a measure into the glass dropper, squeezed it underneath my tongue.

Bitter. Sharp. Sour. My taste buds screeched. The poison set my throat ablaze. I shut my eyes, gritted my teeth, and clutched the counter until the world stopped whirling. Toxic. That’s how the stuff felt as it burned through my body. As if it was killing me, right before it freed me.

Thirty seconds later, I could think again. That’s when the vascular spasm hit me. My toes and fingers went numb and my fingertips turned white, all side effects from the liquid courage. It would take a few minutes to work, but the Luz house was burning right now.

I forced myself out the door, onto the deck and down the steps. I closed my eyes and, heart pummeling my ribs, settled a boot on the lawn. Nothing exploded. I let out a rattling breath and took another step. I edged my way across the trees, fighting an irrational impulse to run back to my cottage and the false assumption that I’d be safe in there. Safe from this moment, maybe, but not safe from myself.

“Mind over matter,” I muttered to myself. “Baby steps. Fear is the mind killer.” Whatever cliché worked, it didn’t matter. I forced myself forward, hoping that the stuff I’d taken would kick in soon.

Amazon bestselling author Anna del Mar writes hot, smart romances that soothe the soul, challenge the mind, and satisfy the heart. Her stories are about strong heroines struggling to find their place in the world and the brave, sexy, kickass, military heroes who defy their limits to protect the women they love. She’s the author of The Asset, The Stranger, At the Brink and her newest erotic romance, To the Edge. Anna enjoys traveling, hiking, skiing, and the sea. Writing is her addiction, her drug of choice, and what she wants to do all the time. The extraordinary men and women she met during her years as a Navy wife inspire the fabulous heroes and heroines at the center of her stories. When she stays put—which doesn’t happen very often—she lives in Florida with her indulgent husband and two very opinionated cats.