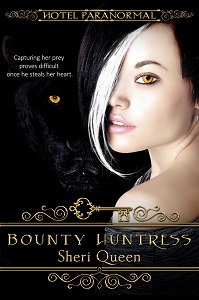 Janda Gray’s a Lykoi—part werecat, part wolf—shunned by both sides of her lineage.

She yearns for the day when she can escape the disdainful glances and leave her home on the outskirts of Sleepy Hollow, NY. When she lands a lucrative bounty hunter contract, she thinks her life is finally turning around. All she has to do is lure her werecat target from the safety of the Hotel Paranormal.

Then she meets a werepanther. Her life will never be the same.

Alexander Holden, second-in-command of a powerful werecat clan, is accused of murdering the woman he was to marry. He must find the real killer to clear his name or spend the rest of his supernaturally long life on the run.

Complications arise after Janda falls for the man she’s supposed to be capturing.

Now she must decide if following her heart is worth risking everything, including the love they’ve found in each other’s embrace.

Love is about making sacrifices. Saving him is all that matters.

Bounty Huntress is the introduction to the Sleepy Hollow Hunter series, as well as a Hotel Paranormal story.

The Hotel Paranormal is THE place for supernatural beings looking to get away from it all. Beings like werewolves, vampires, elves, sprites, djinn and more check in from all over the world for business and for pleasure—and sometimes for both.

Half a block stood between me and my future happiness, but it might as well have been a mile for all the good it would do me. From the alley to the bar there was no cover, no shadows to absorb my presence. I’d scoured the surrounding area for another entry point to no avail. Barred windows and a padlocked backdoor thwarted me. I had one shot at getting inside before anyone could stop me, and that meant waiting until the barkeep kicked the last of his patrons out at closing time. While they were busy getting on their bikes, I’d make a mad dash to the front door. I was grateful the street was deserted at this hour, but it was almost too quiet. One stupid move on my part could mean disaster.
I calculated the distance from where I stood, hidden in the alley, to the bar’s entrance and figured I’d probably be fast enough to make it as long as the wolves were so drunk they wouldn’t notice me until it was too late. It was a long shot, but the only one I had. Wolves were quick, even inebriated ones. Their metabolism burned off alcohol within minutes of downing it, which meant my window of opportunity was about the size of a mouse hole. In my Lykoi state I was faster than a wolf—I’d honed that particular skill long ago with all the times I’d been chased—but I couldn’t go Lykoi. Paws didn’t lend themselves to turning doorknobs, so I’d have to do this the hard way. Nothing new there.
I leaned against the brick wall and let the cool autumn air soothe my restless body. My calf muscles twitched, and my stomach rumbled. It was tempting to give in to the urge to transform and run through the woods I’d passed on the way into town. Maybe even hunt a bit of rabbit. I let out a slow breath and resisted my primal desires.
I counted four bikes outside the bar. Mutther’s might be a neutral, no-colors establishment, but I still had to get past the owners of those bikes. Four big-ass obstacles between me and the portal to the Hotel Paranormal. I knew portals existed in most major cities—definitely in Manhattan—but, of course, my only way into the hotel would be through a wolf biker bar. My luck ranged from bad to stinking bad. I was long overdue for a bit of good luck, but I didn’t look for that to happen tonight. My usual mode of blending into the background to avoid attracting attention wasn’t going to work here. There were no crowds to lose myself in, and the glaring neon sign covering three quarters of the bar’s facade was a beacon spreading a swath of red across the sidewalk. Anyone wishing to enter the bar would be doused in light. This had to be the hotel’s idea of a joke—or a test.

Sheri Queen received her MFA in Writing Popular Fiction from Seton Hill University. She grew up in the Hudson Valley region of New York—an area she loves to depict as a backdrop for her stories—and enjoys traveling to new places where she is constantly discovering inspirations for her writing. In particular, she loves visiting old graveyards.

I start with a basic outline, fill in as much as I can, and let the story evolve. Often that means characters or events pop up that were never in the original plan. My muse has a way of letting herself be known.  :)

Absolutely! Some of them can be such stage hogs. That’s when it can be tough to cut sections that are entertaining, but those parts must also serve to advance the story, otherwise it’s cut and stashed away for another novel.

I can’t point to a single food, but I do love celebrating my birthday (or anyone else’s) with a big slice of triple chocolate layer cake. Yum.

Night owl. I’m most productive once everyone else is in bed. No interruptions and I can get into my writing zone pretty fast at that time.

Hands down any place with castle! I loved watching Downton Abbey, so I’d love to visit the area depicted in the series. Also, Scotland to see where Outlander was featured. Honestly, I’d go almost any place in the UK. Some of my ancestors came from France, and there is a family castle that’s now a museum that I’d love to visit.

Yes, but not as a specific location. For instance, I loved a bookstore in Portugal, which I used as a foundation for a building in one of my stories.

I use it to help me enter a certain mood that I want to reflect in my writing. Once I’m in the zone, I will lower the volume or turn it off to focus in on the scene I’m working on.

Bounty Huntress is a story about a young woman of mixed heritage who longs to escape the side-glances of the wolf pack she grew up in. When she lands a lucrative bounty hunter contract, she thinks her life is finally turning around. Soon she’ll have the money she needs to get out on her own, but first she must bring back her werepanther target from the hotel where he’s hiding. The hotel is in an alternate dimension—one where time isn’t the same as her normal world—and her stay there becomes more complex than she intended. After meeting her handsome target, she’s smitten and must decide if the love she has for him is worth risking everything to help him.

It’s a lot of work, but worth it to see a story come to life. I’m constantly learning something new and I’m grateful for all the support from my readers and colleagues.

Not with the route I took by getting my MFA in Writing Popular Fiction, but I would have started the process much sooner in life. Still, it’s never too late to follow your passion.

I’ve been blessed to have several fantastic mentors who gave me great advice and help with my writing. Entering Seton Hill University’s MFA program was instrumental to advancing my writing skills and confidence.

Keep writing and write a lot. Every piece I write is improved upon by what came before it. Always be open to constructive criticism and continue learning to become a better writer.

I read across genres, so I can’t pick out a single book. I will say that I like J.K. Rowling, not just for her writing, but for her determination to keep pursuing her dreams when life was so difficult in her early writing days. Her generosity once she became such a success is to be admired.

Thank you for having me as your guest today.

2 Packages of Swag - Each will contain the following: