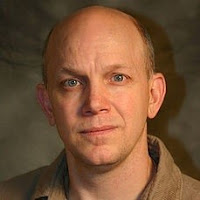 This eclectic mix prepared him to go into his true love: motion picture production. He has produced two motion pictures and two documentaries: His film Night Feeders released on DVD in 2007, and Cold Storage was released by Lionsgate in 2010
Amidst all this, Paul has worked on his writing, starting with his first short story, about Ziggy Stardust and the Spiders from Mars, at age 8. Paul has written and produced numerous commercial and industrial video scripts in his tenure with his forcreative agency, Indievision. He has two published short stories (As You Sow and Double Cross) and one self-published novel (Godchild). He lives with his filmmaker/graphic artist partner and their three cats.

I used to be what they call a “pantser”, where I just wrote the story as it came to me and let it take me where it would. Both A Whisper of Death and The Malaise Falchion were written that way, However, they both took far longer to write than was probably necessary and ran into many detours and dead ends. So now I’ve taken the approach of plotting things out at least to a certain extent. I use a program called Writers Blocks to not the salient plot points and make a rough breakout of chapters. I always come up with at least a beginning, middle and end, and fill in as much as possible before I start throwing words down on the screen. Although I do still occasionally start writing the beginning of a story with no idea where it’s going to go. At some point, though, I must plot it out so that I can make some sense of it and have it go in a good direction. I still try to leave room for improvisation and wherever the characters want to take me. So far it seems to be working well.

Oftentimes they do, and it’s a great thing when it happens. What seems to occur most often is that characters who were meant to be secondary or even tertiary have something interesting to say and demand to be heard. This happened with Corby in A Whisper of Death, who showed me depths to himself I didn’t expect him to have. He wasn’t even supposed to leave town with Erick and Elissia, but he insisted on going. “Someone has to write down Erick’s adventures,” he insisted. “Who better to do it than a scholar?”

What an unusual question. I approve. Hands down, it’s Thai food. I like all Asian food and could eat some form of it every day, but Thai tops the list. For comfort food when I’m sick, it’s macaroni and cheese, and my favorite dessert is banana pudding.

Being in the film business requires me to be whatever the schedule demands. If left to my own devices, I am a night owl, rarely going to bed before 2AM.

I’ve had the good fortune, through my work, to go to several places I never thought I would. Places like Scotland, Brazil, and Poland. I would like to go to New Zealand because it seems like such a beautiful place. I have the Lord of the Rings movies to thank for that desire.

Since I write fantasy and science fiction (well, space opera to be precise), all my places are distant. At least, distant from our world. I suspect they’re all out there somewhere on planets we haven’t discovered. How cool would it be if every time a writer comes up with a complete story, that reality spawns somewhere out there in the cosmos.

I do listen to music, but not anything with words. I get too easily distracted by lyrics and end up singing along (badly). So I tend to tune into Cinemix on iTunes. It’s all movie soundtracks and tends to make for good, distraction-free background noise (I’m listening to it as I type this.) If I’m writing a fight scene, I might put on the Conan the Barbarian soundtrack, which is one of the best soundtracks ever.

The Malaise Falchion is what would happen if Raymond Chandler or Mickey Spillane wrote fantasy. Take Gimli from The Lord of the Rings and smash him together with Phillip Marlowe and you have Snazdaggin, the main character of Falchion. I’ve taken many of the tropes of noir fiction and movies and run them through a Middle Earth filter. I think it makes for a fun story. Hopefully, readers will agree.

Wow, I could almost fill a book with this sort of information, but there are already plenty of good ones that have done it much better than I could. The main thing I’ve learned is how difficult it is to tell a good story in an entertaining way. So much goes into crafting every piece, and rewriting is the key to making the pile of dreck that is a first draft into something that people might want to read. I’ve also learned that publishing is a slow and arduous process. This is something I already kind of knew, but until you experience it firsthand, you don’t know the pain and excitement of it all. Fiery Seas is great, though. I’m very happy they latched on to me and like my work.

I would have concentration more on the writing when I was younger. I often become easily distracted (oh, look…a squirrel) with other things. Consequently, the writing would get set aside. Had I taken it more seriously earlier, I might have been published sooner. I also would have read more books on the craft. I’ve sense corrected these errors, but I should have done it a couple of decades ago.

I have any number of influences on my work, some subtle, some not. Obviously, my love of fantasy has influenced the genre I choose to write. The work of other writers is always an influence, whether you mean it to be or not. My writing group has influenced me with their suggestions and critiques. Also, my thoughts on religion and sexual identity have a way of creeping into my stories, although I try to be reasonably non-preachy about it. Whether I’ve succeeded is up to the reader.

Find some other creative endeavor to pursue! Okay, maybe not. So many more eloquent people have advice about this, but it all boils down to the same thing. Write, hone your craft, write, learn from others who have gone before you, and write. Have I mentioned you should write? And don’t get discouraged. I’ve been writing, off and on, for thirty years and have only recently been published. It can take time and, unless you’re one of the lucky ones, you’re not going to make instant riches. That’s the other advice: If you’re getting into writing just to make money, quit now. Your time would be better spent learning to be an investment banker. If you’re getting into it because you have stories to tell and you can’t not tell them, you’re on the right path.

It’s tough to narrow it down to a favourite book, but if my feet were held to the fire, I’d have to say Stranger in a Strange Land by Robert Heinlein. It’s terribly dated in many ways, and horrifically sexist by today’s standards, but the points it makes about religions and cults of personality still hold quite true, especially considering recent events. And Jubal Harshaw still has some of the best one-liners I’ve ever read. I also can’t narrow down a favourite author, but high on the list are Robin Hobb, Stephen King, Chuck Wendig, Christopher Moore, and Robert Heinlein.

My two previous books are A Whisper of Death, Book One of the Necromancer Saga, also published by Fiery Seas Publishing. There is also Godchild, a self-published coming of age thriller set in 1969. Both are available on Amazon. 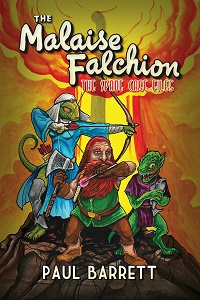 Disgraced during the Demon War, Dwarf investigator Snazdaggin Kundarik (Spade to his friends) wants nothing more than a desk to sleep on, a bottle of grog to drink, and the occasional easy case for quick pay.

Then a mysterious female Elf from the posh side of town shows up and offers him exoneration for his past sins and lots of gold. All he has to do is follow her brother and report his activities. Simple, right?

He should have known better. The simple job soon spirals out of control. Spade finds himself sucked into intrigue, powerful magic, and the hunt for a weapon powerful enough to end the world. Ill-prepared, Spade forges on with the aid of his hapless sidekick and a reluctant female warrior.

Will he survive long enough to save the world and get his grog?

a Rafflecopter giveaway
at December 01, 2016