Blog Tour: Of Cinder and Bone by Kyoko M 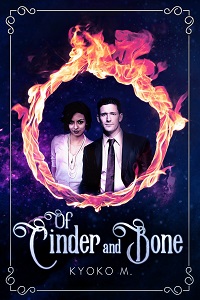 Of Cinder and Bone
Kyoko M

After centuries of being the most dangerous predators on the planet, dragons were hunted to extinction. That is, until Dr. Rhett “Jack” Jackson and Dr. Kamala Anjali cracked the code to bring them back. Through their research at MIT, they resurrected the first dragon anyone has seen alive since the 15th century. There’s just one problem.

Caught between two ruthless yakuza clans who want to clone the dragon, Jack and Kamala brave the dangerous streets of Tokyo to steal their dragon back in a race against time before the world is taken over by mutated, bloodthirsty monsters that will raze it to ashes.

“They’re gone,” Jack whispered. “I don’t…I don’t understand. They were right here, Kam. What did I miss?”
She squeezed his hand. “Jack, this isn’t your fault. Maybe something went wrong and their health destabilized while we were out.”
“All that work,” he said hoarsely. “Years’ worth. Just like that. Gone.”
He shook his head again. “I shouldn’t have dragged you into this.”
“You didn’t drag me into anything. I chose this. I chose you.” She caught his chin and made him face her. Fierce brown eyes blazed at him. “And I’d do it again in a heartbeat.”
“This kind of thing can end a career. Let me take the blame. Please.”
“It’s my career to end. We tell them together. End of story.”
He shut his eyes at her words, shuddering slightly. “I’m so sorry.”
“We’ll find our way again. I promise.” She stroked the side of his face before turning towards the increasingly uneasy spectators around them.
“Ladies and gentlemen,” Jack said after clearing his throat. “I’m afraid that something’s happened. Our hatchlings have flat-lined. They’re…they’re gone.”
A frigid hush fell over the room. The lead reporter stepped forward. “They’re dead?”
Kamala nodded grimly. “Stillborn. We’re not sure how, but we’ve tried everything to resuscitate them and nothing has worked. I’m afraid we’ve lost them.”
Edie’s hands rose to her mouth, and her eyes fell on her son. “Oh, honey.”
“You’ve got to be kidding me,” the reporter moaned. “I got pulled off a hot lead at the Mayor’s office for this crap and you’re telling me the whole thing’s off? Get a defibrillator and bring the little bastards back to life.”
“Watch it,” Jack said very quietly.
“No, you watch it, pal. Everyone’s been talking you up like you’re gonna save the world and yet here we are with nothing to show for it.”
Jack stepped forward, gritting his teeth. “No one put a gun to your head and told you to come here. That’s three years of my life lying on that table over there, dead. Cry me a fucking river.”
Kamala gripped his arm. “Jack.”
The reporter snorted, not backing down even though Jack practically towered over him. “This was just a publicity stunt, wasn’t it? Something to get MIT some attention, since that’s where all the washed up scientists go to spin their wheels and pretend like they’re making a difference. What’s the matter? The real world too much for you?”
“The real world?” Jack laughed bitterly. “You’re about to find out how real the world can get.”
“Jack!”
“No, let him go, sweetheart. This’ll look good on the front page. I can see the headline now: ‘Failed Scientist Socks Award-Winning Reporter for Hurting His Feelings.’”
Jack grabbed two handfuls of the guy’s shirt and a couple of people darted between them, shouting for them to cool off and separate.
Crack.
Jack froze.
Crrrraaaaaaack.
He craned his neck slowly towards the table.
The furthest egg to the left had a fracture running down the length of it.
Crick-crack.
The egg wiggled once, twice. The fracture widened.
Jack and Kamala stumbled towards the table together, their eyes transfixed on the tremors going through the lone egg. A moment later, a tiny green snout poked through a hole in the top and embryonic fluid oozed outward.
Jack snatched up a box of gloves and handed it to Kamala, snapping a pair on, and then reached a shaking hand towards the creature. He lifted the small piece of shell that the dragon had stuck on his snout and watched slack-jawed as it sneezed and pushed its glistening, spindly limbs out. It was the size of a large gecko. The scales were leafy-green over most of its body, with paler shades along its belly, and dark green splotches along its spine. It had four limbs like a normal lizard, but two thin yellow membrous wings stuck out from its shoulders. Its head bore similarities to a bird, with a triangular head with bright eyes, its pupils thin slits like a snake. Each foot ended in pinpricks of claws and it had a set of needle-like teeth just barely poking out of its gums.
“Kamala?”
“Yes?”
“You’re seeing this, right?”
“I am.”
Jack let out a thready, borderline manic giggle as the young dragon wobbled on its legs and let out a needy chirp, its yellow eyes focusing on the two of them after a moment. Jack cupped one hand and brought it forward slowly, his deep voice soothing.
“Hey there, buddy. Welcome to the party. Nice timing.”
The dragon chirped a couple more times and sniffed his fingers one by one. It nipped them, coughed, and then crawled clumsily into his arms. Kamala handed him a small towel and cleaned the little reptile off, smiling as it nuzzled its head against her touch.
“She’s beautiful, Jack,” she whispered. “What should we call her?”
“Pete.”
She choked on laugh. “You’re such a sap. Hello, Pete. Welcome to MIT.”


About the Author:
Kyoko M is an author, a fangirl, and an avid book reader. Her debut novel, The Black Parade, has been ranked #5 in Amazon's Bestselling Occult novels. She has a Bachelor of Arts in English Lit degree from the University of Georgia, which gave her every valid excuse to devour book after book with a concentration in Greek mythology and Christian mythology. When not working feverishly on a manuscript (or two), she can be found buried under her Dashboard on Tumblr, or chatting with fellow nerds on Twitter, or curled up with a good Harry Dresden novel on a warm central Florida night. Like any author, she wants nothing more than to contribute something great to the best profession in the world, no matter how small.