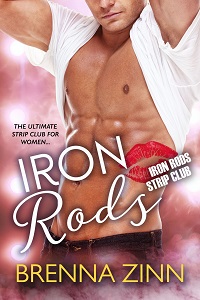 During the golden age of Austin, Texas, women came from miles around to mix fantasy with flesh at Iron Rods strip club. But time moved on, leaving the club in disrepair and the dancers in sorry shape. Bennett Truitt, estranged son of the club’s aging and half-crazy owner, wants to replace the local landmark with shiny new condos against his father’s wishes. His Trojan horse is feisty Tatum Reynolds, his new hire as manager of the failing establishment. He’s sure she’s the train wreck he needs to run the business into its grave, but never underestimate the stubborn determination of a down-on-her-luck Texas woman.

After another rejection letter, Tatum stares fate in the eye and realizes she’ll never be a professional dancer on or off Broadway. Out of options, she accepts Bennett’s job offer to manage the strip club and is determined to return the run-down Iron Rods to its glory days, no matter what or who stands in her way – even if it means going toe-to-toe with the boss’ son.

“Are you the manager here?” she asked, making her way down to the end of the bar.
He punched the end of the pen he held and tossed it onto an open file. “I guess you can say I am. Is there a problem?”
His tone sounded a little too bored for her liking. He might not be hard to look at, but he had pompous ass written all over him. “As a matter of fact there is. Have you taken a good look at this place lately? It’s a dump. The lighting sucks, the dancers aren’t good-looking and couldn’t dance to save their souls, and the bartender is serving lousy drinks.”
He tilted his head. “You don’t say.”
His prissy, holier-than-thou attitude provided just the spark she needed to stay ignited. “Yes, I do say. You should be ashamed of yourself and this place. It’s the worst club in Austin.”
“And yet you’re here.”
“I—” Tatum started, but faltered in the wake of his unexpected retort. She blinked several times, too flustered to speak. Weren’t managers supposed to be nice to their customers? Even rich, snobby managers?
The stranger stood and Tatum’s gaze continued up until her head tilted back. Powerfully built, he not only stood several inches taller than her, he dominated the space around her. Though he might not be as humongous as the bartender, he radiated a fierce but intelligent intensity that commanded her attention. Here was a man used to getting what he wanted.
“You think someone else can do better?” he asked.
Her mouth watered as she watched the play of muscles behind his snug shirtsleeves and listened to the deep voice that poured over her like warm molasses. Good Lord, the man was virile.
Not permitting herself to be influenced by intimidation or lust, she raised her chin and said the first thing that came to her mind. “I think a drunk monkey could do better.”
“You looking for a job?”

Brenna hails from the Lone Star state where she lives with her husband and four dogs, three of which are as big as long horns. She’s a fun-loving writer who likes nothing better than to explore while she travels (no planned excursions, please!), eat what others cook (it works out better for everyone that way), and avoid the gym whenever possible.

Her journey through life has taken her all over the United States, as well as many places throughout the world. Using her travel experience as a guide and peppering in interesting characters she’s met along the way, she loves nothing better than weaving tales of romance and leaving readers yearning for adventures of their own. 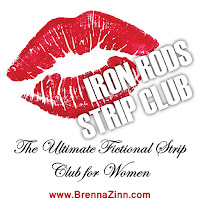