Book Spotlight & Giveaway: Soul of a Viking by Sky Purington 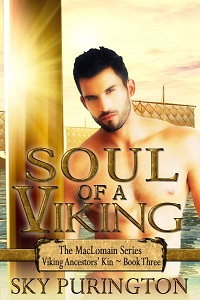 Lauren refuses to believe that her sisters traveled back in time to tenth-century Scandinavia. Cybil must be off doing one thing or another. And what of Samantha? She returned then vanished again with a bunch of uncivilized ruffians who called themselves Vikings. While thankful the crude men finally left, she’s now caught in an unusual situation. No matter how hard she tries, she cannot step foot outside her Winter Harbor chalet.

Desperate to return to the twenty-first century and figure out why he and Lauren were cursed by a Nidstang, Tait Sigdir struggles with what feels like half a soul. But that’s not all. When he finally returns to the future, he realizes how troubling things really are. Though drawn to Shannon, he can’t seem to stay away from her sister, Lauren. Hard to believe considering how difficult she is to be around. Even for a flirt like him. Yet if he’s not near her, he becomes uncharacteristically sullen.

Caught in an unraveling hex that steers them closer to the enemy, Tait and Lauren are forced on an adventure that tests them in more ways than one. Friendship emerges. Passion ignites. Even so, love does not come so easily to those who are cursed. As it turns out, they must get through a whirlwind of unfortunate events that will either bring them together or drive them further apart.

“Who goes there?” came an all-too-familiar voice from the door.
Lauren sighed and called out. “It is none of your concern, Tait.”
Evidently, he thought differently because seconds later he entered, a frown on his face as his eyes swept around the lodge. “I heard a man in here.”
“It was just Einar,” she began, her words trailing off as she gestured towards him only to find he’d vanished.
Tait’s brows slammed together. “Einar? I do not know that name.”
“He was just right here,” she murmured, glancing at the rear door. “He must have slipped out the back.”
“Nobody has come or gone since your sisters left,” Tait said, troubled.
“I can assure you they did. A woman then a man. Einar.” She folded her hands in front of her and focused on the bigger problem. “You had no right to barge in here. Please leave.”
“Actually I had every right.” He continued eying the place looking for Einar. “This is my lodge, woman.”
His lodge? How unfortunate. “My name is Lauren.”
Tait shrugged as an annoying grin tugged at his lips. Apparently, he was done searching out another man. He gestured at the water. “You will bathe then join your sisters in the main lodge, yes?”
“That was the plan, yes,” she allowed.
“Then please,” he headed for the corner table, “do not let me disturb you.”
She frowned as he filled a mug with what appeared to be ale. “What are you doing?”
He gave the mug a pointed look. “Drinking.”
“Then please do so outside.”
“But this is my lodge.”
“Then I will need another lodge.”
“No.” Tait shook his head. “I can only be so far away from you and will sleep nowhere but here.”
Her eyes widened. “We are not sleeping in the same room.”
“We will if we have to.” He gestured at the tub again. “Right now you do not need to worry about sleeping but bathing.”
Lauren inhaled deeply and remained calm. “As much as you would probably enjoy it, I am not bathing with you here.”
“Well, I am not leaving because whether or not I saw anyone enter, I heard a man in here. So I will not leave you alone.” He considered her before he murmured something and a tall screen appeared in front of the tub. “There. Now I will not be tempted by you, woman.” He removed his fur, plunked down and narrowed his eyes at her when she narrowed her eyes on him. “Now I can focus my thoughts on Shannon.”
Lauren ignored her strong reaction to his words and smoothed her expression. Regardless, there was no controlling the flare of defiance that screamed inside her. A defiance that had her doing the last thing she intended. Something she found extremely appalling and would never normally do. Something she would judge harshly if she saw another woman do it. Especially one who was married.
She tested his resolve about Shannon as she held his eyes and took her time stripping down before she sauntered around the screen and got into the tub.

Sky Purington is the bestselling author of over twenty-five novels and several novellas. A New Englander born and bred, Sky was raised hearing stories of folklore, myth and legend. When combined with a love for nature, romance and time-travel, elements from the stories of her youth found release in her books.

Purington loves to hear from readers and can be contacted at Sky@SkyPurington.com. Interested in keeping up with Sky’s latest news and releases? Visit Sky's website, http://www.skypurington.com to download her free App on iTunes and Android or sign up for her quarterly newsletter. Love social networking? Find Sky on Facebook and Twitter.

$25 gift card to winner’s choice of Amazon or Barnes & Noble.