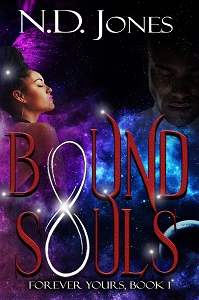 A supernatural love triangle that tests the bounds of science, truth, and faith.
Regent Lela of Asiya is the most powerful person on her planet but she is powerless to save the life of her beloved soulmate—Zion Grace. For thirty years they lived as husband and wife, but Zion’s time is at an end. Lela must go on without him.

“There will never be anyone else for me.”

Despite having died, nothing can keep Zion from his soulmate. He’s back but not as the man he once was. Zion must help Lela move on with her life, lest he lose her forever. But how can Zion convince Lela to accept the love and affections of another man when he still wants her for himself?

"I love you, Lela. My heart is forever yours.”

Lela and Zion are bound souls, destined to live eternity together. For these lovers, death is not an end, but a fateful beginning.

This novel includes “The Garden,” a bonus short story.

It was true, Zion had only three more years left on his thirty-year life extension. He was tired and felt even more so as the days, weeks, months and years crept by. Zion spared a sidelong glance at his wife, whose head was down, eyes closed and hand still fiercely gripping his own. She wasn't ready for the ride to end either, yet they both knew it was slowing, preparing to grind to its final halt and he would have to disembark, leaving her behind.

This thing with Ammon had eaten away at Zion for the last several months. Yet Ammon was simply an outlet for his own anger, fear, and depression. He was growing older, his hair thinner and grayer, and his stomach… well, let's just say he'd had to use the services of a good seamstress over the years. Yet Lela was still as beautiful and fit as when they'd first met.

Zion didn't begrudge Lela her slow aging or fine, alluring features. In fact, he loved that about her. What did bother him was that other men could see what he saw. Everything about Lela exuded intelligence, grace, dignity, strength, and beauty. Zion learned a long time ago, she could never see herself the way others did, especially men.

While Zion rarely entertained jealous thoughts before or cared much when he caught a male giving Lela an approving look, now he saw nothing but. Under the circumstances, the little signs of masculine appreciation for his beautiful wife enraged him.

Tears flooded her eyes. Even wet, they were still the most stunning eyes he’d ever seen. Picasso marble Zion thought the first time she’d looked at him—a combination of black, brown, gray, and white. Back then, they’d sparkled with intelligence and curiosity, now they glistened with pain. Lela wasn't ready for this conversation. How could she be?

"No, it's me who should apologize. I thought you were paranoid, seeing things that didn't exist."

"I acted like a jackass, a Neanderthal, damn near dragging you out of the banquet room before the function was over. Hell, I might as well as hoisted you over my shoulder and beat my chest like a caveman."

He rubbed his thumb across her right cheek, then lips. "You're an incredible woman, Lela." Zion paused, nearly biting his tongue on his next words. The ones his selfish heart screamed at him to not utter. "You'll live for a long time, probably another four or five decades. I only have three years left. For an Asiyan, you'll be in your prime when I pass on.” His voice cracked when the held tears dropped from his wife’s eyes. She knew where he was going with this, Zion realized.

"You'll have to go on without me, and I don't want you to spend the next fifty years by yourself."

"I won't be by myself. I'll have Xavier." Lela pushed off the bed and moved away from him. She walked to the window, refusing to acknowledge the true meaning of his words.

Zion followed, watching her stern but sad image in the window. Needing to touch and reassure her, he wrapped his arms around her waist and pulled Lela to him.
"The thought of another man being this close to you," Zion whispered, stirring tendrils of her long hair, "makes me want to commit murder. When I heard Ammon offering for you, it took all of my self-control to not take a laser gun to him. The only thing I kept thinking was that he couldn't have you. That you're mine and mine alone."

"Is that why you've been so angry these past few months?" She turned in his arms, then rested her head against his resilient shoulder.

"Yes and something else."

Zion lifted her chin, compelling her to meet his eyes.

"I didn't want to acknowledge how selfish I was being," he said, leaning down and placing a warm, soft kiss on her lips. "I want you to be happy in those four or five decades you have left, Lela, but I don't want you to find happiness in the arms of another man."
"I have no desire to mate with anyone else, or to take a lover," she reassured, initiating another kiss, a desperate embrace full of a wife's integrity and denial. "I can't imagine being with anyone other than you. I love you, Zion. I could never love another."

He knew she spoke the truth. He believed her, but she didn't understand. Zion did. He'd experienced the loss of a spouse.

"When Iman died, a part of me died with her. Like you, I thought there would never be anyone else for me. And that was true for a long time—”

Lela shook her head in protest, not allowing Zion to continue. "Don't." A heartbreaking plea. "Don't say such things. There will never be anyone else for me."

Zion saw the near panic in her upturned face, her Picasso marble eyes glowing with resolution and despair.

It was exactly the same. Yes, what he felt for Iman was different from the love he had for Lela. But it was love all the same. Loving Lela didn't mean Iman ceased to occupy a special place in his heart and mind. A small, warm piece of her and their life together would always be a part of him. As he would always be a part of Lela, but she couldn't see it, not now. But someday. Zion didn't want to think about that and clearly, neither did his wife.

N. D. Jones lives in Maryland with her husband and two children. She is the founder of Kuumba Publishing, an art, audiobook, eBook, and paperback company. Kuumba Publishing is a forum for creativity, with a special commitment to promoting and encouraging creative works of authors and artists of African descent.

A desire to see more novels with positive, sexy, and three-dimensional African American characters as soul mates, friends, and lovers, inspired the author to take on the challenge of penning such romantic reads. She is the author of two paranormal romance series: Winged Warriors and Death and Destiny. N.D. likes to read historical and paranormal romance novels, as well as comics and manga.