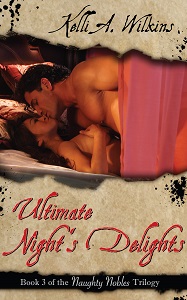 The second book in the series, Midwinter Night’s Delights, picks up six months after the last story and follows the continuing sexual adventures of Annabelle and Julian. (And yes, this novella is just as hot – if not hotter – than the first one!)

Ultimate Night’s Delights is the third and final novella in the series. I never intended to write a trilogy, but the characters kept popping up in my head, and I knew they had more stories to tell! Readers and reviewers fell in love with the characters and the storyline, so I decided to write one more book that wrapped up the trilogy.

However, when I started thinking about the plot, I wasn’t sure what direction to take. I knew there had to be something interesting (beyond a naughty “anything goes” ball) that raised the stakes for everyone, and I thought about blackmail. From there, I developed the idea of the “Black Duke” and his mission to destroy Vincent. Then of course, I had to devise a clever way to tie it all together at the end.

I also enhanced a storyline and shared some insight on two secondary characters, Lono and Lobo. (Readers were briefly introduced to them in the second book.) In this story, I explain how they came to be employed by Vincent and Sabrina and what’s ahead for them in the future.

Here’s the summary and a very adult excerpt:

Ultimate Night’s Delights
Julian and Annabelle are back for the final ball!
The Midsummer and Midwinter Balls changed Julian and Annabelle forever. Vincent, the Marquis of Demby, and his wife, Sabrina, introduced them to a world of erotic pleasures. Freed from their inhibitions, they now help other shy couples explore their sexual urges and hidden desires.
But life on Vincent and Sabrina’s estate is anything but tranquil. The notorious Duke of Blackwell has discovered the secret about the naughty balls and is out to destroy the marquis.
Vincent refuses to deny the rumors about the “anything goes” parties he hosts, and turns to his friends for assistance. Together, they devise a plan to defeat the Black Duke… and still find time for a few wicked games.

A HOT excerpt:
Annabelle knelt on the tile floor in front of Vincent and took his prick into her mouth. Hot and thick, it tasted like the minerals in the bathwater. She grasped his buttocks as she sucked him.
“Ah, that’s it. Go on,” he whispered. “Take more.”
She opened her mouth wider and drew him in deeper. When they had approached the bed, Vincent told her to get him hard so he could screw her properly. Lono—or Lobo—stood at the head of the bed staring off into space as if nothing out of the ordinary was happening. Sometimes Lono and Lobo participated in the games, but mostly they watched. Even when she tried to get a rise out of them, they barely noticed her.
Annabelle peeked at the other bed. Sabrina sat on the edge and Julian was on his knees with his blond head buried between her thighs. Would they switch partners later? She looked forward to making love with Sabrina. Their kissing and touching in the bathing pool had gotten her excited.
“Stop. Get on the bed,” Vincent said.
She obeyed and lay on her back, legs parted. Vincent knelt over her and picked up a jar of cream from the nearby table. He scooped out a handful and smeared it all over her, making her cry out. The hot lotion! She and Julian had used this before—it burned and prickled when it was first applied, but after a minute, it turned everything fiery hot and made you eager to screw for hours.
Vincent pulled two silk straps out from beneath the red coverlet. He opened her legs wider and fastened each ankle to a bedpost. Now she was completely open to him.
She squirmed on the soft mattress as Vincent positioned himself on top of her. This would be fantastic. Vincent was hard, and she couldn’t wait to feel him inside her. Having her legs tied would add to the thrill.
“Lobo, take her arms,” Vincent ordered.
Lobo grasped her forearms in his wide hands. He stretched her arms over her head, holding her immobile.
“Thank you,” Vincent said, as he shoved himself into her.
Annabelle rocked her hips in time to meet Vincent’s solid thrusts. The cream filled her with a blazing lust. She strained against the straps, desperate to wrap her legs around Vincent’s hips. Instead, she had to remain bound and at his mercy…

I enjoy hearing from readers and other authors. Feel free to drop me a line with questions or comments about the series.
Be sure to follow my blog for the latest updates and visit me on social media.
Happy Reading!
Kelli A. Wilkins