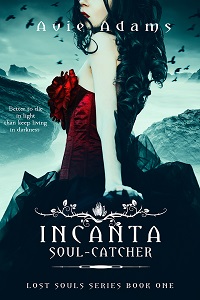 Darkness rules her life. A pitiless man wants her body. A Daemon craves her heart.

Cytriah is a talented soul-catcher – her songs can enslave souls in dead bodies.

It’s what’s expected of girls born on Daemon-controlled Malvaar Island, where failure is punishable with the worst any woman can fear.

Whilst Cytriah strives to join the elite of soul-catchers, a chilling secret from her past rips her life apart. Trapped between dangerous men and thrust into a struggle to survive, she’s left with one choice: to pact with a Daemon.

And it may bring her something far worse than death…

Nearly two blackhours had passed before her incantation yielded a result.

Seeping through the incense haze of the chapel, luminous against the thin smoke and blackness of the obsidian vaulting, her quarry floated back. Opalescent and ethereal. Wary. Sometimes—at random and in a heartbeat—it untangled itself into an endless array of glimmering threads, becoming a spectral wholeness a breath later. The matrons used to say these threads contained a life’s worth of memories. They enveloped and shielded the glowing scar running through its centre, the core.

No rebirth for this one. Having captured eighty souls, Cytriah couldn’t imagine it being any other colour. Red was the shade of a suicide, and another one wound to the melody woven on her breath.

Unaware of the deception.

Shouldn’t be taking you so long, growled a voice in her head, an echo of a displeased matron from her days in the hive.

A similar, unspoken comment appeared along the tight line of Senior Reviver Amond’s mouth. He had been waiting on the other side of the catafalque all that time.

She avoided his eyes, not even trying to predict his reaction—it would become evident when the ceremony concluded. Using an old incantation, sung too many times before, was a foolish move. The worn combination of words didn’t take her to the highest point, the karrn–zilfe. Worse, she was forced to keep singing until she outwore the soul or her throat gave out.

Your voice must not waver, Incanta. Another reprimand from the past.

Somewhere high above them sat an invisible spectator—the Daemon who had brought the body from the World Beyond. She had never met a Daemon face to face, but could sense their presence while using Darkmother’s powers.

Her hands hurt from clutching the stoneheart: a piece of tumbled jasper, the size of a woman’s fist. Succulently scarlet, yet the gloom of the chapel and fluttering redfire turned the vibrant colour into a humble cousin of its own tint. Dark streaks lashed the stone. Branching like lighting, some of them split not unlike the arteries in a human heart. Engraved in it was the girl’s name: Loaire.